As you may have noticed, I like to compare the need for enterprise of using both structurated / formal and informal to the need for any individual to use both his left and right brain. With the conclusion that there’s no need to have two oversized hemisphere but to make the interact the one with the other. That also means that the so-called enterprise 1.0 based on hierachy, control, authority and deviation reduction has very few chances to remain competitive, and that the enteprised 2.0 based on tacit interactions doesn’t have more chances to become competitive one day.

What’s important is to juggle with those two aspect. At this point the debate is neither vertical vs horizontal nor 1.0 vs 2.0 or tacit vs formal but how (and when) to switch from one to the other, and back.
Following that direction, I appreciated a lot this representation by Teemu Arina. 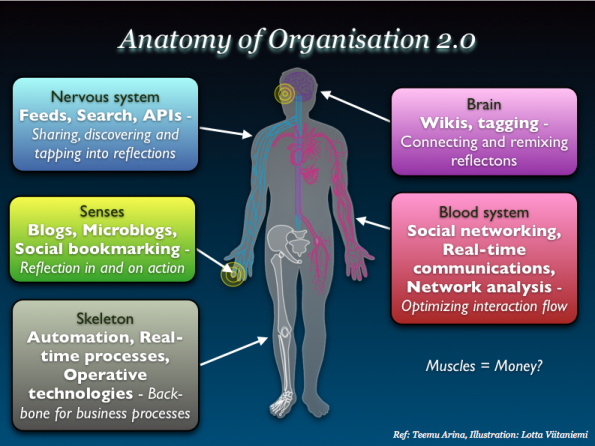 What I really find interesting is the “skeleton” which inclues all our process, worlflows . Perharps we often find them inconvenient but thanks to them we know where we’re going and what we’re supposed to do.

Enterprise 2.0 is too often considered as something by itself and it’s integration in an enterprise global schema is nearly always neglected.

Because the skeleton is central for production, all the “soft” things we may add must be strongly related to it. Assuming that implies that we also assume enterprise isn’t (and won’t be) 1.0 or 2.0, about structured process or tacit and informal exchanges. Enterprise is made of both and since the skeleton has been existing long before we care about informal interactions, the point is to connect the informal side of the organization to the formal side.

It’s about organization, it’s about sensemaking, it’s about management…and not especially about making people use such or such tool. Because once the connection will be done, we won’t ask anymore about how to make the tools adopted.

The enterprise “2.0” buzzword has been (and still is) wonderful to crystallize thoughts about new paths to be explored, to make managers and CxOs realize there’s something new there, but now that ideas has more and more to be turned into action, we have to keep in mind that these people’s concerns are not about enterprise 2.0…but about enterprise, which is their day to day reality.