Can enterprise 2.0 spread without adhocracy ?

The fact that more and more people agree on the fact that enterprise 2.0 is mainly about the way we do things takes us back to corporate culture issues.

It’s not something that’s easy to deal with. Since it’s been proved that culture is a key performance factor and that it’s important to recruit people who are aligned with the corporate culture, one logical attitude would be to say “strengthen and preserve it”.

It’s also proved that launching a project which may not be aligned with the culture is like organizing failure. Which is logical because it would be like asking an enterprise to act the way she is not, to ask people to act according to values which are not those those they were hired for.

That leads us to the central question : what to do is your culture is not aligned with the goals you want to achieve

An obvious answer would be “change the goals”. Humanly securizin but not that efficient : goals highly depend on the market, are driven by competition and don’t only depends on the company itself. At this time comes the question of changing the corporae culture.

It’s not about forgetting the past, buiding a new identity (maybe sometimes…). It’s almost about identifying which components have to evolve, in which proportions, and how, in order the company would do what’s needed to meet its needs.

It’s exactly the main topic of Diagnosing And Changing Organizational Culture: Based on the Competing Values Framework which I read last week. 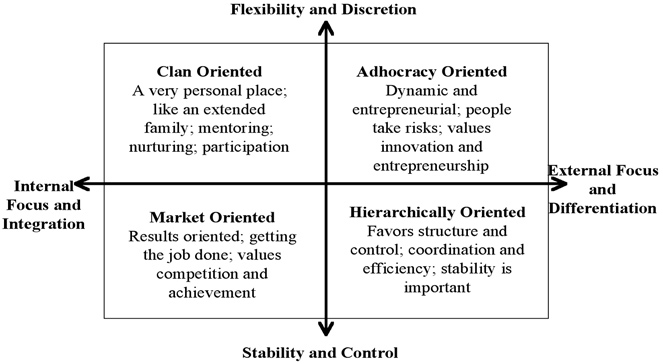 If we forget the present situation and only focus on defining what would be the suitable model for a company trying to face it’s present challenges, it’s clear that the “clan” and “adhocracy” dimensions are key to be efficient here and now. We can deduce that companies in which those dimensions are dominant are more likely to embrace their new challenges, adopt the new suitable way of working and the appropriate tools.

This feeling was confirmed by what I read. The adhocracy dimension is the less prevailing into organization. And the less present. Another interesting point : many companies are working on increasing “clan” and “adhocracy” and not the others (which are already hypertrophied).

Let’s compare it with the “ideal context” for enterprise 2.0 projects. Nothing to add !

Now have a look to where those initiatives happen today ; in companies (or “islets” inside organizations) where adhocracy is still alive or, at the opposite, in totally hierarchical companies that realize they need a more balanced culture in order to embrace their new challenges. We can guess Procter and Alcatel are in this second case. And Danone in the first : their legacy culture seems to be right one for 21th century challenges.

I think the last step before seing companies taking the whole 2.0 paradigm into account is understanding the need for a cultural shift. Not being “full adhocracy” companies but, at least, increasing this dimension.

Another interesting thing in the proposed methodology, is that it relies on consensus and force people to put in word what things mean and does not mean. A good way to fight agains irrational feards

Anyway enterprise 2.0 can spread in an adhocracy oriented company or a company which want to increase that dimension. But what about those whose principles are to stick on full hierarchical culture?

Previous articleLinks for 06/06/2008
Next articleMeet blueKiwi at the Enterprise 2.0 Conference