You must have noticed how many posts have been published about Cisco these late days. The US giant seems to be the first example of global enterprise 2.0 or, at least, to be the first to meet such a recognition for its success. Many things have been writen about that and it will be easy for you to find informations.

In order to understand more globally what happended at Cisco I found an interesting speech Cisco’s CEO, John Chambers, made on the 15th of october at the MIT.

What can we draw from that ?

First I’d point at Chamber’s approach which is not about tools at all. Of course, at a moment, he shows how blogs, wikis and grow are widely adopted, but he never lets us think that it was a purpose in itself ; the increase in the use of 2.0 tools is seen as the proof of a successful transformation of the organization, with a tangible ROI. If I had to summarize my thought I’d say : “we decided to work in such a way for such and such reasons, things have turned out fine and the consequence is that tools that support this way of working are widely used.

First was the crisis. Chambers says that Cisco won market shares in each of the last economic downturns. According to him, the advent of an economic crisis means companies have to start thinking of positonning themselves on what what feed the next upturn. Here are the symptoms of a company that continuously learns from its past and lies within the scope of a perpetual evolution, turned toward the future.

Innovation and operational excellence. To be successful today, companies need to excel in the way they operate their business. To be successful today, companies need to innovate. Chambers notices that these two approaches are often considered has opposite, a company being thought being unable to do both at the same time. The example of Cisco shows us than success is neither in operational excellence nor in innovation : companies have both to be excellent and excel at operations.

Fear of change is a permanent feature. Such a system, reluing on permanent change, makes people uncomfortable. Trying to avoid that is useless. On the other hand, it’s important to know how to evactuate fear to make change possible , to secure it. According to Chamber’s, it can be done threw communication. It’s quite logical if we consider that it’s important to explain, discuss, and make it possible for everyone to place himself in relation with others.

Competition doesn’t matter. When facing hard times, many companies adopt a wait-and-see policy,Â  standing one’s ground and waiting for others to make the first move and follow. That is not the way Cisco did : the company choosed to focus on itself in order to understand what was going to happen, the understand the sense of the market. I can see there the proof of the importance given to social and human capital. Human capital because Cisco trusted its employees, its internal talents to find doslutions, Social capital because they draw the consequences of knowing that better decisions are made when communities are involved in the decision making process. Answering a question from the audience, Chambers recognized it was hard for a command and control guy like him to listen to people and give up some control. But at the end he admitted than the decisions that were made were better than those he could have made on his own.

What matters for Cisco is to seize market transitions, it’s what makes the difference between leaders and followers. That’s not about costs or manufacturing plants, it’s about knowledge, intelligence, reflexion. Obvious ? But it’s better to repeat it again and again.

No success without new business models. Chambers hammers it in with a sentence that embodies the need for changing the way we consider production and the way companies has to operate on their market. According to him new emergent markets have still to be discovered and conquered. But those markets are not countries anymore, they are ever changing business models. Growth levers are here but they force us to see things with new eyes, to forget our certainties.

The future is all about service. Some speak about Saas as a new eldorado.Â  Chambers’ vision is wider : accorder to him it’s “everything as a service”, even Service as a Service.

The future is the group. Chambers begins to go deeper into the organizational implications of what’s above. According to him the future is not in individuals taken individually but in the group, in communities, which takes us back to what I wrote above on human and social capital. In concrete terms, he’s a part of something like 30 communities (councils) which contents are pushed to him according to his needs. The collective intelligence supporting the decision maker, but also a srong message to those who are afraid of knowledge organizations where information may overwhelm people. I often write about reversing the information flow in order to make relabant information go to people who need it instead of turning employees into gold seekers while drenching them with mud. Chambers says quite the same : in his opinion, it’s not people who have to search information but “information that finds me” according to the needs.

Organizations can’t avoid a transformation. One more proof that tools is useless in a context of organizational inertia. Chambers has to deeply transform the organization, Cisco being a vertical and hierarchical company, focused on personal production and objectives. He had to built a cross-functional from scratch. Now 30 to 50% of leader’s time has to be dedicated to cross-functional implementations, they’re assesed and rewarded on this basis. It’s one more application of my favorite adage “tell me how you’re evaluated, I’ll tell you how you word”. Of course it was not that easy. Part of the leadership team, of the managers, may excel in a system and not understand how to behave, what to do in another one (I like the analogy with basketball players who are good in a system and can’t adapt to another). The “alignment integrist” I am often says that once a mode of work has been defined and considered as the best way to meet the objectives, who doesn’t play the game puts himself offside, most of all if they are managers who have to act like drivig belts and can’t play against their company. Chambers enforced this logic to the end : 25% of the leaders had to leave the company.

Answering to a questions of the audience, he explains that now leaders are trained according to that, with a focus on the needed form of leadership, that they’re told how they are expected to spend their time. In the same tme, evaluation and rewarding systems has been updated too.

Community work and alignment. I was talking about alignment. It’s logical that the “councils” follows the strategic issues. If you also add the cross-functional impact of leaders, Chambers can choose any of them, express his vision and…let him to the job. Communities raise according to the need and they can come with a business plan in less than two month with better decisions than in the traditional committee-based functionning. “Speed and scale” are Cisco’s keywords. Involving people who are close to the action really bring great results. 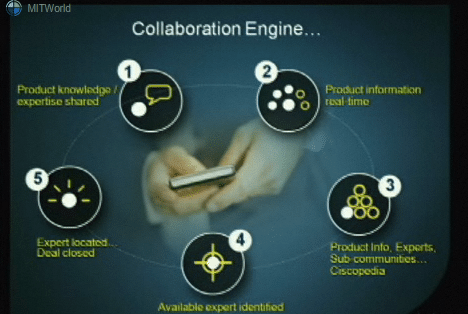 ROI ? The ROI of this new way of doing things is obvious. If “better decisions ” is something not quantifiable enough, perhaps the fact Cisco is now able to address 26 majors issues a year, compared with 2 before, would help you to see the benefits. Talking about productivity ? One example : as the “medium business” council thought it was impossible to address the small business market, a “small business council” was created and proposed a business plan in one month. It’s an awesome example of an organization that creates new opportunities starting from its needs and not from its certainties. 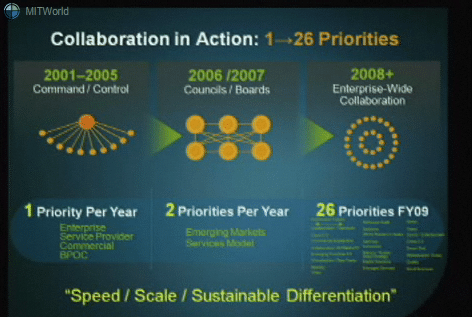 Internal and external. I already told you about I-Prize. It’s the typical example of communities which allow a company to find outside ideas they don’t have inside. New businesses, new products, new employees… 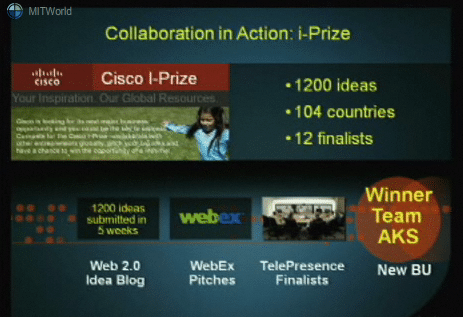 A global vision. In a few slides, Chambers shows that blogs, wikis and co are more and more intensively used. But this was not a purpose, rather a consequence. Anyway, he makes it clear that web 2.0 doesn’t have to be considered in terms of tools but in terms of global schema. And to it wisely : at cisco, general public behaviors have been translated into business behaviors. You’re afraid of Facebook because you don’t want your employees to spend their time on funny things ? Replace “funny things” by experience and you get it. The needed effort is not that big too : while an ERP projects took 3000 people and almost crashed the company, it only took one year and 50 people to implement web 2.0 at Cisco. Everything is about vision, process and culture, and culture is the tough point. The major issue is ot to find new operational logics but to make them “manageable”. 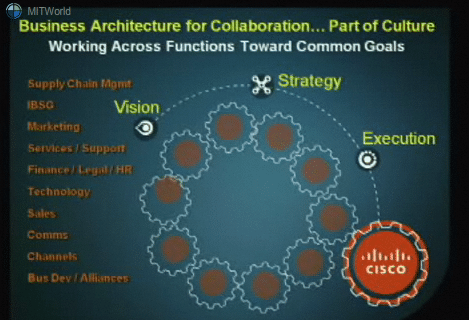 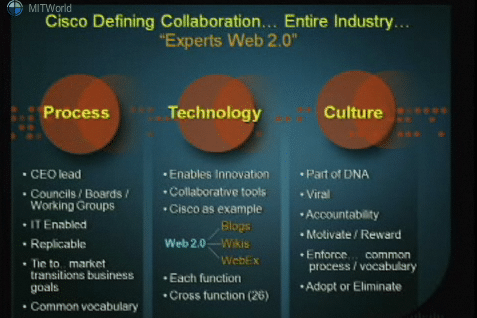 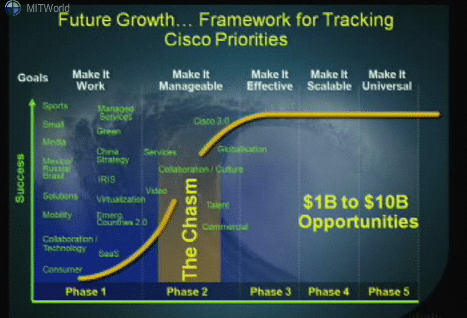 Corporate responsability as an asset for future growth ? Cisco is now a part of thoses companies who understand that their future growth will depend on the way their environment’s. It inspires me a question which answer I still don’t have. After Danone, a company with a true bottom-up culture that is pionneer in the field of social business, this is the second example or a company who tries to reverse the pyramid and position itself on the corporate responsability area. Does it mean that companies that are able to successfully manage this transformation (or who have it in their DNA like Danone) are more likely to play a role in co-development logics that may be a real asset in tomorrow’s economy ? Perharps it’s worth wondering about that.

Cisco shows us that “it” is possible, provided we accept to see things with new eyes.