Social networks : are companies looking for the ROI or something else

Whatever people may say, it’s still the hot issue of enterprise social networks. Considering ools that that are not processing tools strictly speaking, benefits have to be found on the new way of doing things they make possible rather than in the tools themselves that are only enablers. As I wrote here, benefits are not on the cloud but in the operational reality.

This said, the answer is still hard to be found. 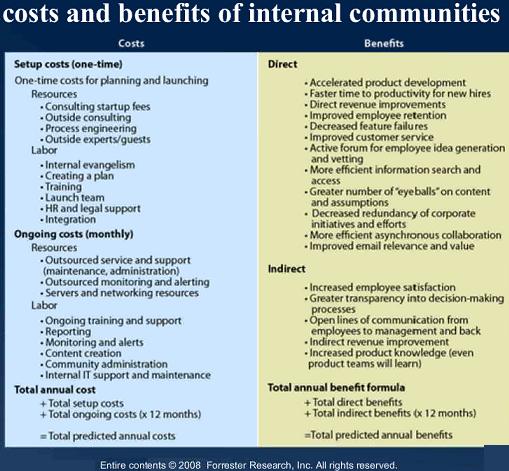 I found the list of direct and undirect benefits very exhaustive and clear. But is that enough ?Â  No. If we can explain, for example, how intangible assets contribute to value creation, we cannot explain in which measure. Let’s consider the CISCO case. Chambers can give a backed up by figures ROI in terms of capacity to drive projects and in financial terms, but I’m not sure that when the decision was made had any figure he was automatically sure he would reach.

Automatically. The word is said. We know how to note and measure benefits a posteriori but we don’t know how to foresee them. We all know the ROI, how it will happen but it can’t be measured until it happens because there is no mathematic formula to anticipate it.

What decision makers really ask for is not a list of benefits, it’s how to foresee them with accurate figures. When they invest in “processing tools” they can easily have such a formula : how many operations an hour, how many products…(that doesn’t mean it will work). But what about the non “mechanical” side of the production process, what is mainly about people ?

The question is not that new. No one mechanically foresee the benefits of any measure that aims at improving work conditions, motivation… People intuitively know that if nothing is done it will cause negative consequences. Nothing helps to foresee customer’s behaviors too. If the packaging is nice they will be more likely to buy your product than if it is an an awfull grey box. But will sales increase by 10, 20 or 50%. Everybody hopes, nobody knows.

The only difference between social networks and the above examples is that, in the second case, references and histoy exist, relying on experience. We know that when we “do that”, we can expect an increase of x% in such domain, that any invested dollar here makes you earn so much. In our domain we have very few references, business cases in order to prove something mathematically.

Please be aware that this kind of method also have its limits and may be counter productive. Infering from the impact of a signe factor on a complex system is hazardous. Most of times enterprises modelized the results without modelizing the way it was reached. The more interdependant variables are at work in the production process the less prections may be accurate. I have no doubt decisions makers are aware of those limits but, a least, it reassures them because it will be impossible to blame them for not having based their decision on a mathematical basis, even if it’s not accuate. Whatever, the ROI of social networks depends on so many things such as each individual taken individually, culture, management methods etc… I wish good luck to whom want to modelize that.

I may be answered that it has already been done in the past. Yes. On simple interactions with single-task employees in a weak interdependance working environment. Fortunately, Elton Mayo conducted his reasearches in he 30s, maybe so much attention would not have been paid to him in 2009.

As a conclusion, it seems that companies who ask “what’s the ROI” bias the reflection from the start. They are not trying to understand what the benefits will be but they’re looking for a formula to put a figure to them.

On a similar question, I was recently answered that the best solution is to try, measure and extrapolate. Having the logical certainty that a logical benefit will happen is enough to start. Then we’ll learn from the experience and try to modelize what can be.

Not very satisfying but perhaps it’s the less bad solutiion.

In this field, maybe you’ll find this slideshow useful. Although it’s about KM the problematic is very close.

Previous articleLinks for 01/29/2009
Next articleEnterprise 2.0 and the myth of content generation