Enterprise 2.0 as a part of the Global Enterprise

Many questioning about enterprise 2.0 these last weeks. How to make it work, how help companies to understand it, how to calculate the ROI ? So many questions that, at the end, can be summed up in only one : undestranding how these new logics can integrate into the existing and add to it. Without that, it’s obvious that either companies don’t dare either they will dare with overcautiousness and won’tbe able to get the most from their initiative, either will dare in a bad way and things will be counter-productives.

One consequence of this misunderstanding is that “2.0 projects” are isolated from the “real enterprise” in order to preven itself from any side effect of something that’s still not well understood (what proves once again how important it is to find answers to all these questions). So, what’s needed is to help companies to visualize things according to what they are today and according to their very nature.

First, the primary goal of any enterprise has to be identified. Easy : make money. Period. Of course we can discuss what can be done with that money and what can and cannot be done to make it, but it is the only undisputable goal.

What leads to an undisputable consequence : companies spend their time trying to organize themselves in order to produce as efficiently as possible. Becoming an enterprise 2.0 is not a goal for any enterprise and should not be. The only one is : improving the way things are done everyday, the way it produces.

But what does “production” really mean ?

As said here, companies must face three challenges about production. By production, I mean the general sense of the word, every activity aiming at getting to a result and not only the “industrial” sense. In my definition, for instance, recruitment, sale…are productive activities.

â€¢ Being able to produce something defined, following a processus in which everyone knows exactly what he has to do, when, and how. And since a name has to be given to anything, let’s call it FPC for Formal Production Capability

â€¢ Being able to overcome any breakdown or insufficiency in the above mentionned processus. Nothing new here but has to be taken into account more seriously than ever. In a world where goods are manufactured on a production chain, it seldom happen and is accidental. In our current world, let’s call it knowledge economy or anything else, goods ans services have to be more and more customised. As a consequence, production is less and less standardized and the need for readjusting it according to clients who have more and more specific requests is not an accident anymore but a norm. So, production is both a matter of problem solving and putting unique adhoc processes at work. And, since it happens more and more often, businesses can’t do as if these kind of activities didn’t exist for the only reason they’re not predictable and seem to be out of control. On the contrary, their unpredictability has to be admitted and a framework has to be defined in order, even if things are not under control in the strict sense of the word, they respect some essential rules. Paying no attention to that and focusing on the traditional FPC causes many dysfunctions and put employees in unbearable situations. Solutions can be brought by either a Service Oriented Organization or Wirearchy. Let’s call it APC for Adhoc Production Capability

â€¢ Being able to innovate and produce unexpected things. It me be because the APC didn’t manage to solve a problemÂ  but it also aims at making ideas emerge ex-nihilo. Enterprise 2.0 has been caricatured as being only about that for a long time. Maye it’s only about 10 or 20% people’s time but it has to be facilitated because it’s key in a disruptive economy. Let’s call it SPC for Serendipity Production Capability.

First conclusion : businesses have to develop these three points. Not one of them, all of them.

Second conclusion : no employee or activity is restricted to one of this kind of production. Enterprises have to think globally the way things articulate the one with the others.

Third conclusions : each of them has specificities that impact:

I tried to gather all my thoughts in a table. Here’s the first draft. 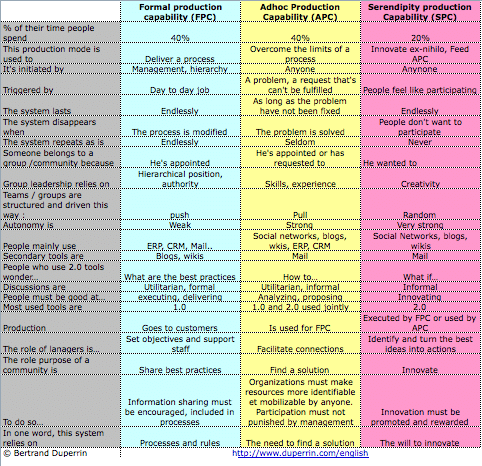 This is a first draft that is far from being perfect. But we can start drawing some conclusions.

The amount of time dedicated to each is arbitrary. I assumed that people spend as much time to solve problems and overcome the limits of formal production as they spend in “formal production”. About innovation, I relied on the famous “Google 20%” which seem to be a good norm to me. More innovation must also be used when no solution can be found to solve a problem.

So, we can conclude that :

â€¢ More than the half of the worktime is dedicated to activities and tasks that are have not been previously defined and require more or less autony.

â€¢ Companies should facilitate the switch between these three systems because it’s what people need to get things done.

â€¢ Formal production is the spinal column because everything starts from it and everything has to go back to it.

â€¢ There’s no unique satisfactory way of doing things. People have to know how to switch from one to another.

â€¢ The concept of team, group or community changes depending on the case. As do their rules and key factors of success.

â€¢ There is no competition between different kind of tools but complementarity. Companies has to define their articulation.

â€¢ Every kind of activity has its 2.0 side which is more or less intense depending on the case. 2.0 things can also serve formal activities.

â€¢ The big issue for companies is to build on both management, organization and technical side, each employee’s ability to switch from a production mode to another with the appropriate rules. Not for the pleasure of changing but because it makes people able to deal with more than 40% of their needs. This is the missing link.

â€¢ Companies can’t think what is called “1.0” and “2.0” separately. It’s because one is put in a safety box and the other isÂ  put in quarantine that the first reaches its limits and the second is unable to overcome it.

Who said that the BPM to Enterprise 2.0 link mattered ?

A last thought to end with this draft. Companies focus on their “FPC” because they can’t admit that unforeseen things could happen, making people do unschedules and undefined things. They think it means loss of control and do everything in order to prevent people from doing things this way. On the contrary, it’s unavoidable and necessery. It’s fefusing to tool and give these activities a defined framework that may make them go out of control.