We can hear that microblogging is killing blogging and that, globally speaking, the future of web is real time. An hasty discourse I don’t subscribe to. It does not seem to me that a trend is replacing another but that they are complementary.

This applies to the general public web but also to the corporate web.

This complementary nature can be explained by postionning a given message according to two axis : consistency and temporality.

No long demonstration is needed to explain that it’s hard to deliver a message and a consistent information in 140 characters. If all the information had to comply with the 140 chars rule, we would be informed of many thing without really knowing anything. In the other hand it’s hard to fill out a blog post when the message is short, terse. In this case, the title is often meaningfull alone and the body of the message brings nothing new. That’s what made a part of the blogosphere switch to the twittosphere. Not beacause one is better than the other but because its formatÂ  fits more with the needs of most of people (remember that pure “creators” on social medias are only a few per cent).

Some messages are here to stay and make their place in the worldwide informational inheritance. Some others only have an instant value and won’t deliver it if they don’t spread quickly. When one writes blog post, he aims at his regular audience, but indexation by search engines gives the post a kind of permanence. Then the long tail makes its job. Even of the indexation of the messages on twitter improves, its archives only have a few interest. If a message is missed, there are many chances it won’t be of any interest one day later : either the information will become valueless or it will become available for everydoby through more conventional channels. In the worst case, if something has a real value, it will keep on resonating (being retwitted) long enough in order it will still be able to be caught a few days later.

So a two speed web is emerging. Consistent messages that have to remain and deliver a complex message, and short and instant messages on a faster track.

It’s easy to realize how real time can reach its limits while traditionnal blogging does not have the needed reactivity in some circumstances. The complementarity between both allows to cover the full range of needs.

Some may say some messages meet both conditions. That’s why many people use twitter to mention blog posts. What reminds us the need for articulating both. 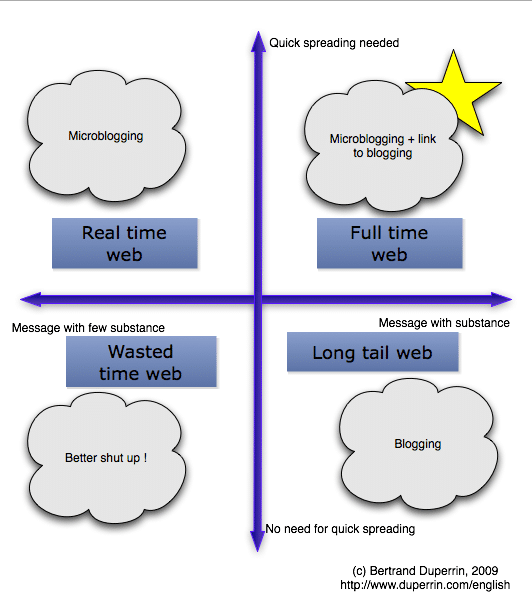 Previous article
The twilight of enterprise 2.0 and the emergence of process socialization
Next article
Links for this week (weekly)