Socialize your business ? What does it mean ?

So this is the continuation of the reflection I started here. The purpose is not to discuss any management related thing but to position enterprise 2.0 regarding to the real enterprise.

Why ? Because lots of feedbacks converge on this point. The question about Enterprise 2.0 is not anymore about knowing what are the benefits, if a business should try or not, if it’s a fad, but how to implement it in a company that has a past, certainties and used to work without that for ages.

So what we need first is a reflection about positioning and integration with pre-existing logics. As a matter of fact, a reason why so many projects fail is that they were not positioned in order to have any impact on business, would it be negative or positive, and, consequently, failed to engage people who didn’t understand both the purpose and the method.

Let’s take knowledge management as an example. When businesses faced issues that needed such projects, the very name of the approach was meaningful enough to make people understand what it was about. It doesn’t mean that KM projects were successful, but understanding what things are about are essential for success. Say “we’re launching a KM project” doesn’t mean it will be successful but makes everyone understand what it is about. Say “the solution to you problem is Enterprise 2.0” and have a look at the doubtful face of 95% employees and you have to admit the road will be very, very long.

Everyone needs to understand “why, what, how”. It’s the preliminary condition to the ownership that is needed for success. This ownership means that people should not be taken to an unknown ground they will consider as hostile, but need to start from a well known groung and, step by step, push its frontiers. The whole while being aware of making sense regarding to they day to day job and concerns, what is their current paradigm.

What does enterprise 2.0 propose ? Nothing more than introducing a social dimension in the way operations are currently doone. Before even wondering how, what matters to to explain “why” and “where”, because not everything has to be socialized. E2.0 people have also to keep in mind executives’ concerns and expectations. It may seem obvious but starting from the need instead of the desired result changes everything.

I won’t say a lot of things about that since other people already did it wisely a long time ago. The need for keepings innovation going on in times of scarcity of ressources is also something that has to be taken into account. Anyway, the need for engaging customers in many processes that used to be solely internal is obvious today. And the impact on the core business too. This answers que “why should I change the way I’ve been doing things for ages, isolating people and informations ?” question.

By definition, people work following rules involving a defined set of people following a defined set of tasks. The purpose is not socialize everyhting but to socialize processes (or pieces of) that really help people doing a better job. It’s not about what enterprises would like to be socialized but about when the owner of a task meet a dead-end, either because he or his staff don’t have the necessary bandwith, or because they are facing issues that force them to find a solution elsewhere. Socialization helps to identify, engage and make people interact, more or less temporarily, outside of the formal process and team. Socialization also helps the formal team to share experiences on the flow. The purpose is clear : help to deliver a process, a set of tasks, lowering delays due to unexpected issues and improving the process through an ongoing feedback. ROI and measurements are simple, obvious. It’s about creating interactions upon real needs, day to day issues, without trying to energize dead born communities where people have nothing to share the one with the other and even no reason to do so.

As for personal ownership, all these things can be formalized into day to day behaviors. I tried schematized what I said here. 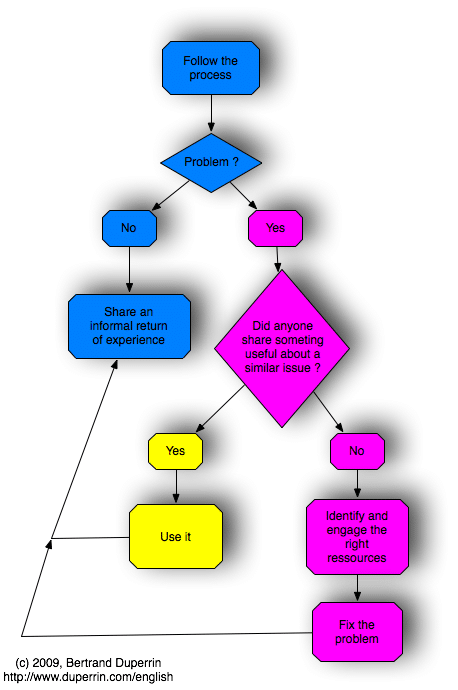 There’s nothing really speacial about that. It’s only the socialization of a problem solving and ongoing improvement process. An approach that can be tooled with wikis, blog, rich profiles, microblogging, social networks…and which logic is understandable by anymone.

It doesn not revolutionze what’s been said about enterprise 2.0 for years. But the new starting point makes things more coherent for common people and helps them to position the project where it brings something. Once this logic is understood and the project is framed, we may talk about tools.

It seems to be very close to my “Service Oriented Organization“. A good example of socialization of a crisis process comes from Toyota.

Of course, not everuything has to be socialized, and the perimeter may change according to many reason. Sometimes it will be within a team, a departement, the whole company, with clients, general public…

I’ll end with a drawing stolen from Marc de FouchÃ©cour from Nextmodernity. I rencently wrote that there were no oppostions between social and processes but complementarity. Here’s the illustration 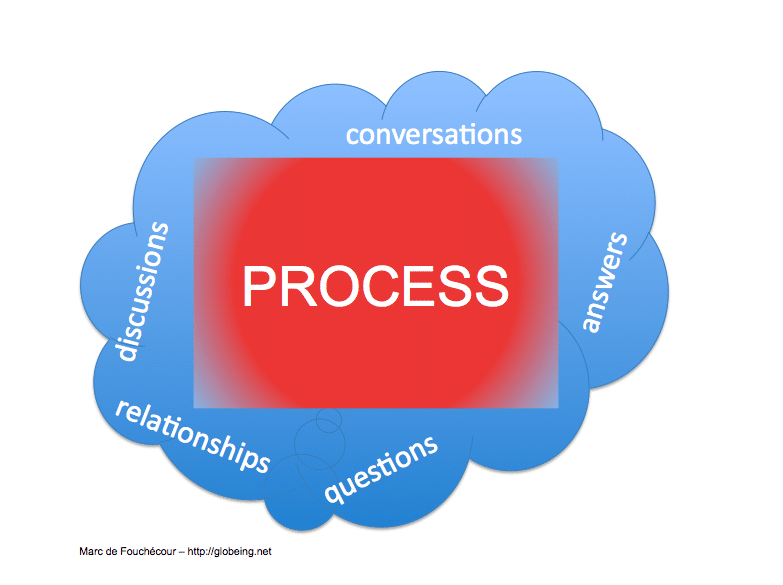 Previous articleLinks for this week (weekly)
Next articleA 15 yo consultant wrote a white paper about teenagers. And so what ?