A few words about a founding principle of web 2.0 that appears to be a big mistake. This won’t be without impacts on future usages, on the werb as inside companies because we are reaching the limits of the central component of any collective dynamic : the user.

Founding principle : contrary to the original web, web 2.0 is “people centric”. That means that internauts are not passive receivers anymore but stakeholders, active players, who can take the lead on existing medias and even build their own.

So people should structure the web and its flows, building a network which nodes would be the internauts. It seems logical : in a people-centric system, people are at the center and the rest is supposed to be turn around them.

We are forced to acknowledge that web users, and above all power users, feel more and more like not being at the center of anything but like being split up.

Web 2.0, web as a platform, means services and applications. Users are at the centre….of every service or application taken separately. But it the end, they are slit up between Facebook, linkedin, twitter, their blog, YouTube….They publish things in many differents places, read things on many sources and, at the end, they don’t know where they put such or such things. I don’t even mention the need to update a lot of profiles.

It’s the same with enterprise tools. When web 2.0 gew untidy inside the firewall, people have to face many tools with overlaping features. There is also an overlap between their business and professional lifes. You think there are no links between both ? That there should not be ? When people are really passionate about their job, they do a lot of interesting things that can be useful for their jobs, their colleagues, even when they’re off. You may want to share a blog post, a bookmark with your colleagues, on a private and secured space because the conversations that will follow have to be secret…

At the end, the common user, that is supposed to be at the center of everything is split up, torn between all these tools. The truth is that web 2.0 isÂ  not people centric but platform centric. The increasing number of platfoms split people up, distract them and waste their time and energy.

Of course, many things can be automated, we can organize things in order what is published somewhere is republished elswhere. But it turns people into plumbers who have to deal with a network of pipes that get more and more complex every day. This has to be updated everytime a new application is used, that the “leading app” changes etc… It will soon not be viable anymore.

Is Google Wave the answer ? It’s too early to say even if it seems that it prefigures interesting things. An unified interface that pushes content through a new protocol. But it supposes that the protocol is adopted. And datas are still scattered. Closer to us, and already working, Seesmic Desktop is a first step in this way, even if it’s not so ambitous. But something still lacks.

The social web is made of social networks. Networks mean profiles. Having 30 profiles while people are one and only one person is a nonsense. The perfect solution would be to have one and only one profile, an only place to publish content, and being able to push the content and parts of of profile to such or such service according to what we want to appear here and there. It allows to unify things and to control more easily what is where.

Here we are. The web is still working to keep its promises. Still many things to build, to invent. 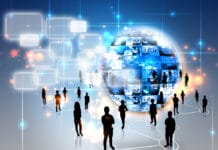 First steps with Google + : a not that social broadcasting tool

A zero-email organization ? Please be serious…

Employees engagement through social media : is it an illusion ?

Enterprise 2.0 people-centric ? Are you really sure ?

What are the remote worker’s challenges?

Processes designed for the wrong people: the #2 irritant of employee...