Article précédentLinks for this week (weekly)
Article suivantWill you be the internal evangelist of the year ?
Lire

Make your own enterprise 2.0 diagnosis

The concept of enterprise 2.0 is still unclear to many, even though they are often less far from it than they think. If, for sticking to their reality, we look at it in terms of process socialization, we realize that a lot of Mr. Jourdain in companies that have a logical relatively close but not “institutionalized” and not tooled. In short there are many “almost 2.0” islets but no many companies as a whole deserve the same name. (Notice : M. Jourdain is a reference to “Le bourgeois gentilhomme“, one of the most famous part of the play being when he was delighted to learn that he has been speaking prose all his life without knowing it.)

For once I’ll try to make it short because I came across a simple diagnosis tool that can let you know where you are and, roughly, to determine where to focus your efforts.

I invite you to go read the post where I “stole” the matrix. 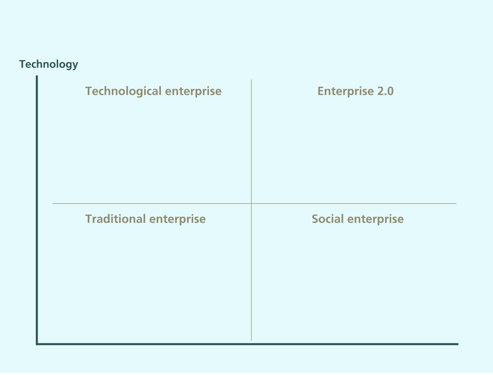 Where are you in terms of technical maturity? AndÂ  in terms of ‘social practices’, a word that should not be confused with collaborative: there is a dimension related to independence, intrapreneurship that is not negligible. Determine both what you think being to be the key elements of the technological maturity, the key behaviors of the social dimension and you know where you are and, more importantly, what you need to develop. More relevant than aiming to a nebulous 2.0 and applying magic recipes that are inappropriate to your own situation.

By the way, this is close to what I already wrote onÂ  IT / HRÂ  synergies on such a project. Each axis is indeed a dimension related to one of these entities.

Are businesses doing too much for their employees?

Everybody Wants to Love Their Job

0
The question of the relationship between employees and their work and their company remains a subject that is much in the news. It seems...
Lire la suite
Digital Transformation

Preconceived ideas on the transformation of small and medium-sized businesses

0
Golden Bees is one of the startups that caught my attention at Unleash18. It is a solution that for me is at the crossroads...
Lire la suite
Employee Experience

2018 is the year of the Employee, Oracle says

Personal data: the fine line between personalization and intrusion

Are businesses doing too much for their employees?