Your knowledge helps you more than your productivity

I’ve always had an ambiguous feeling about productivity. In the one hand, doing more or faster with the same amount of resources is a significant improvement. In the other hand, with hindsight, we have to admit that productivity continuously increased these last decades, that whenever a hard time everything is done to increase it even more, but despite of that, companies don’t seem to have improved their overhall financial performance. We also have to add to this the fact that, a time when enterprises rely not on machines or peopeale repeating endlessly the same tasks but on people managing information and solving problems, thinking that any business can run a 100m run in zero seconds is hare-brained.

I’ve been neglecting this issue untill I came across this article that remembered me of it. Please have a look at this meaninful chart stolen from it : 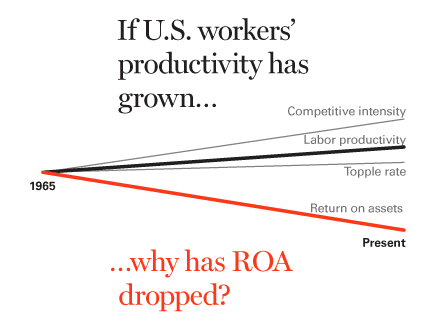 Despite an ongoing improvement in productivity, ROA collapsed on the same period. Why dit it happen ?

According to the article, it’s due to a total disconnect between enterprises et their current environment. Till now, businesses used to increase their size to create more value. Today, in an interconnected economy, value is not created anymore by increasing size but by multiplying information flows. The difference between the most and the less performant companies can be found in their participation to knowledge flows, both internally and externally, dynamics relying on social software. Focusing on “traditional” productivity only benefits to clients, not to the enterprise that doesn’t create more value.

In brief, the good old scalable efficiency is not enough anymore and companies should now focus on scalable learning.

The gap between the potential of any company and the benefit drawn from it is doomed to increase unless companies decide to take the most of their digital infrastructure supportingÂ  knowledge flows and actively participate to these flows, both internally and externally with other businesses, and implement a voluntarist innovation policy.

Performance improvement will require the adoption of a logic of exchanges and innovation within ecosystems which is the only way to significantly improve things. It will make possible for anyone to improve one’s own performance through a creative problem solving process which implies the ability to connect among peers inside and outisde the organization. Contrary to the previous century when things used to come from the top, these new dynamics will be driven by people.

All that takes us back to a well known topic. The only way to bring a real and perenial improvement is to take the most of both knowledge capital and digital infrastructure. If not, the gap between investment and results will become wider every day.

Previous articleIs Netflix the right example of enterprise 2.0 ?
Next articleThe future of microblogging is…. blogging !