Previous articleSocial Medias : being there, doing as usual, doing new things
Next articleLinks for this week (weekly)
Lire

Networking and collaboration : is enterprise a land of trust or distrust ?

I recently wrote that it what obvious to me that for many people some activities and behaviors had to remain in their private sphere and, that social networking and everything that comes with is not a part of what they naturally want to transpose in the workplace. I also temperated my words saying that, of course, generation and local culture factors had to be taken into account. But, according to the last discussions I had with people from all around the world, the gap between some european countries and the anglo-saxon world is more than a supposition.

Luck made me come across a Microsoft survey[fr] since then. What does it say ?

The survey shows that the French are attached to preserving a clear boundary between their personal and professionallives : with 86% respondants, French are,by far those who want to differenciate their online profile from their professional one. 61% do it systematically.

The survey also tells us, what may seem paradoxical, that the French are those who think the less than their online activities will affect their professional lives. Why ?

France is the outlier. French respondents reported being less concerned than other groups, and study findings suggest two key reasons for this. First, the data suggests that the French do not rely as heavily on online information to make either social or professional judgments about others. Second, data shows that the French are considerably more proactive in monitoring and managing their reputations and have, therefore, less to be concerned about.

In short, we care so much about the informations that may exist about us that we are sure (and maybe we’re wrong) that nothing that is left online can be harmful to us.

Two obvious conclusions have to be made ad this point :

â€¢ Strict separation bewteen personal and professional lives. Question : does it only concern informations or the related behaviors too ?

â€¢ We do our possible that the informations that can be found online about us would not help anyone to judge us. Question : do we transpose this behavior in the workplace ?

If a person cares about the impact of the information about him/her, there is no doubt that what appears in the field of the professional activity is a strong concern.

Let’s go back over what I meant in my previous post : it’s easier to start by reassuring people with slightly exposing practices in a well known human sphere (team, project group) and let people grow bolder than throwing them into the social bath. That does not mean that this kind of group is the one in which people always feel the best. It only means that who don’t dare to expose himself, at least little, in front of cloase colleagues with whom there is a shared past and a reciprocal knowlegde of each other will never do anything in front of unknown people, even weak ties. In the same way that, out of the office, there are things one can tell his close family, his neighbours, his friends, anyone…each circle is granted access to a given level of personal informations to let them “score” you, understand who you are.

Yet, if members of a team don’t have to expose themselves to fin each other (the team exists and is formalized), it’s impossible to be a player in a world of communities and networks without giving some informations away to let others know who one is (yes…collective intelligence can rely on personal branding). In a professional context it means sharing ideas, opinons, even make propositions and suggestions about business issues. This is a domain where people would prefer to remain silent if they think (for good or bad reasons) that they can be judged because of what they say.

Matter of culture ? Obviously. Compare a country where people have the right to fail because who don’t dare never progress with a country when one may be thrown out of the game at the first mistake and you’ll have part of the answer.

It doesn’t matter if things will change in the future : we have to deal with what’s the current situation here and (I had many confirmations…) elsewhere. How to do ? Start at a level where fears will be balanced by trust and an actual connivence. The team, the group… work on trust (in oneself, in others…) and make small steps toward the big social bath knowing not everybody will jump into it. But it will help to develop a minimal level of shared practices and maturity for everybody what is better that a maximal level for 10% and nothing for others. 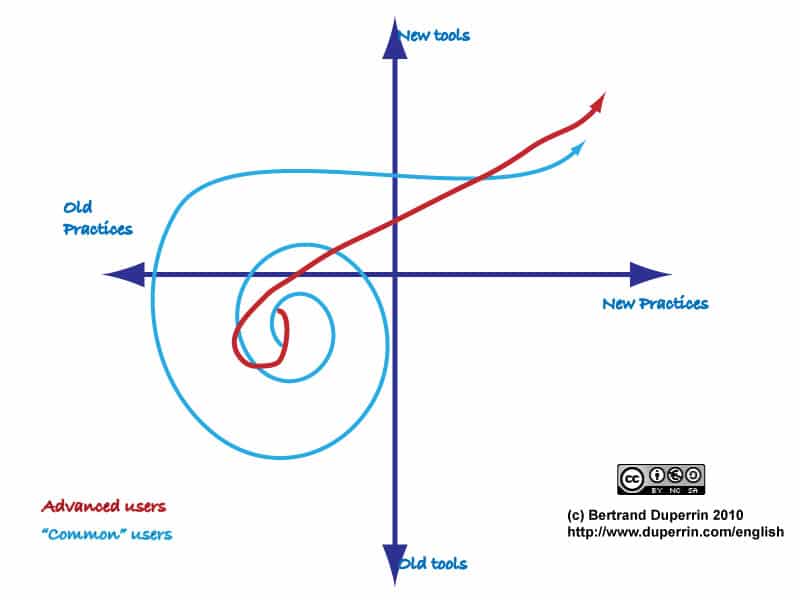 This may help us understand why in some cases it’s possible to start with the social big bang and then care about local needs that are less ambitious and demanding, and in some other cases the reverse way has to be chosen.

Each case is unique. Even inside a single enterprise we realize than each local subsidiary obey to its own rules that are not always the goup’s ones. Said differently : build your strategy, of course according to you needs, but also taking local and individual constraints into account.

Employee experience is sick of the software industry

One of the major problems with employee experience is the disruption in work flow or information flow caused by the tools used.
Read more
Recommended Bookmarks

Once you have become aware of what employees really do at work and have identified all the factors that generate frustration, pain...
Read more
Collaboration

It's been a long time since we've had a major announcement in the small world of the Digital Workplace, and here we...
Read more
Human resources

Onboarding and mentoring are not just for the inexperienced.

We talked about the onboarding process recently and I wanted to come back to a point that I think is very important:...
Read more