What place for communities in collaboration ?

The switch from a compartimentalized enterprise collaborating on a small perimeter to an enterprise that harnesses mass collaboration and leverages social networks and communties is much harder than many expected.

But is “transformation” a relevant word ?

First because collaboration has many differents levels and scopes that not exclusive but complementary. Enterprise 2.0 does not mean the end of groups and groupware but brings a new dimension that helps getting rid of the known boudaries and addressed problematics that could not be before, or not in such an easy way. Then, and that’s a consequence of the previous point, because employees’ logic is to find a path to go from one logic to another without denying what they used to know and do before and still makes sense.

Communities form on a topic and is crowded by conversations about this topic. People’s driver is to share, learn, find solutions, make ideas emerge that will not immediately apply to something, answers to problems what may not have emerget yet. Unlike traditionnal formal structures, these communities have no objective to achieve at a given due date. They are more likely to be defined as background and ongoing processes than by defined things that have to be delivered at a given moment. Meanwhile, employees also collaborate into formal structures and there’s no doubt that their participation into communities improves their ability to bring the right answers into their everyday collaborative activities.

Compared with the web, 10% employees are very comfortable to participate in vibrant communities. The other 90% will only join them to find answers to problems that happened and could not be solved in the in their workaday perimeter.

This is not trivial at all and is the evidence that enterprise 2.0 only makes sense in a global framework that takes into account all the contexts people face.

â€¢ the approach must not only focus on the social dimension but on bringing some coherence to all the contexts, explain them to employees and help them to position in each one.

â€¢ tools may support a fluid circulation through all these contexts for both people and information without any break in flows and dynamics.

â€¢ the intensity of of the new practices may differ according to the context. Each context has its social side and needs but in a more and or less intense fashion. That’s not an “all or nothing” deal.

Let’s also admit than, on a cultural point of view, many organizations are not comfortable with communities and conversations but a first step maybe to focus on team efficiency, on day to day tasks, to help people and culture grow bolder.

For instance we often hear managers saying “people are here to work and not to have conversations” what is quite se same as the “I’m not here to run a social club” that Andrew McAfee used to illustrate how the “social” word was hard to het. For these people, maybe a workaday/task/project driven approach to “social” may make more sense, reassure and would help to demonstrate some benefits even if the challenge in terms of behaviors is more modest than in the “social big bang” approach.

Booz Allen Hamilton is one of the best example of successful enterprise 2.0. They started with the social and community approach. At the last Virtual enterprise 2.0 conference they told more about their future roadmap : integrated document management solution, incorporate the benefits of E2.0 methodology into structured projects and team sites. Be sure that other companies which are not BAH, this would have been the start. A few weeks ago I was on a panel a large company told that its main concern was to start from the existing and build on it. 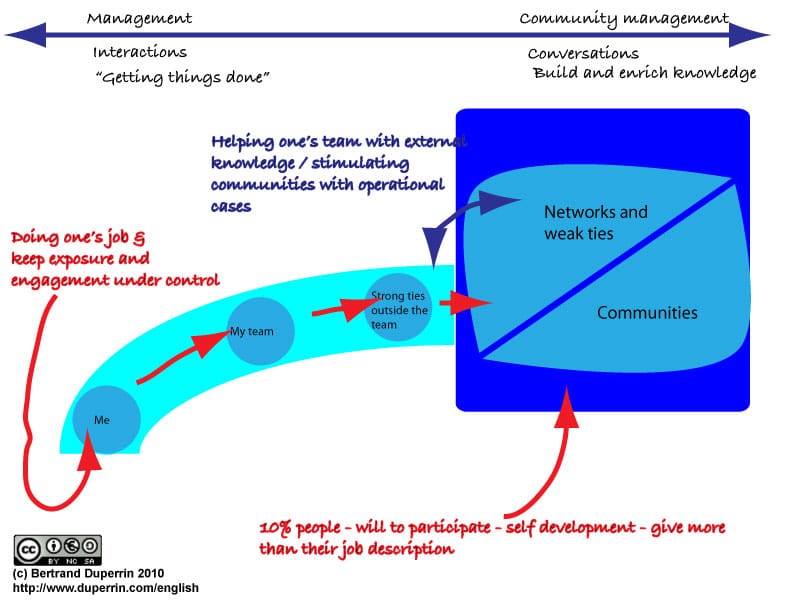 Leaders and managers: how far are you prepared to go to protect your “disruptive elements”.