Empowered : the service marketing (and even economy) manifesto 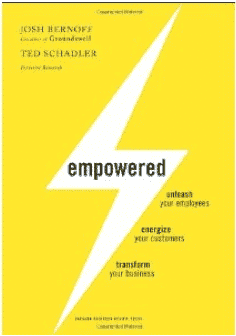 I just finished the reading of Empowered

, by Josh Bernoff and Ted Schadler, that is in some ways the sequel of Groundswell

which was a must read when it was published. To be honest, I have been quite deceived by Groundswell. Of course that’s a lucid, accurate and comprehensive photography of what the web is today and is still worth reading for many execs because there’s still an impressive gap between the usages of the web and how decision makers gets it. But something was missing in the conclusions : businesses must, of course, go on the web and join the groundswell, ok there are identified best practices about than? And so what ? Flirting with internauts is useless if it doesn’t create any kind of value for both the business and the customer.

That’s the new dimension brought by “empowered” : the book goes far beyond the nice discussions on the web to tackle what’s core in business :realigning the whole company with customer satisfaction. Everything starts with one assumption : facing a customer that can talk, compare, and impact the reputation of the company, there’s a need for employees able to fight with the same weapons, to join the customer on his own field. What means : use the same tools as the customer, meet him where he his and take any initiative to meet his expectations. The answer to customer’s needs will result more and for from an individual initiative from an employee, taylored and designed “on demand” that from the general and standardized corporate discours that aims at addressing anything without addressing anyone.

To do so, not only the employee has to want to engage in such a process but also the company must not prevent him from acting this way and, ideally, must provide him with the right tools and policies to achieve a good customer service. Saying that, the issue appears to be about management and IT policied that the book tackles in a pragmatic and lucid way. Some organizations that are comfortable with their good old practices from another century may not be comfortable with that but the arguments are clear and indisputable. That’s not about giving up control and let anybody do anything but facilitating things with a framework that’s secured at both the legal and IT level. Moreover, and that adds to the credibility ot the book, the authors admit that employees may be a danger to themselves and the organization and some risks have to be mitigated. That’s the first fundamental contribution of the book : for once, marketing is not considered as an isolated bubble but as a part of a global chain that involves the whole company and has to be perfectly aligned. The book is full of wise advices, best practices, examples and means to self-evaluate and compare with one’s industry leaders.

Second contribution, that is the logical consequence of the first : the concept of service. Marketing becomes service. Understand : instead of saying “look at how great my product is”, say “How can I help ?”. Of course it applies to people who are already customers to make them stay and spread the word, but it’s also an exemplary attitude towards those who may become customers in the future. In fact some companies already got it. And if I come back to my last dummy case, AirSocial would be a company that empowers its employees, not AirShy. That said, the question of knowing if service is replacing marketing or marketing has to learn service is still open.

Enough reasons to buy a book that, for onces, tackle the customer relationship issue from another standpoint than futile and lovely conversations in isolation.

That said, it makes us wonder about many things. The assumption is that there are HEROs (Highly Empowered and Ressourceful Operatives), or people who want to become HEROs, in organizations, and that they need to be supported by the management, by IT ect.. But it’s obisous than any HERO may need some help from his no-HERO colleagues, those who only want to do their job as they were told to do it, without taking initatives and risk. What to doin this case ? The non written conclusion of “Empower” is that service is not only about customers but that anyone in the company is an internal customer that needs empowered colleagues, and that, in the end, the very notion of collaboration in the workplace may be replaced by service too.

Months ago, John Chambers was talking (among other) about “Everything as a service”. Here we are, and “Empowered” indirectly lays the first brick of the concept of Service Economy. Not the way it’s been thought for decades, but the way it should be.

Get it on the “empowered” micro-site : http://www.forrester.com/empowered

Previous articlePicture of the week #7 : It’s easier to go through Harvard than the ordinary
Next articleThe death of oral exchanges in the workplace ?