Customer service : avoid being the victim of you social media success

Summary : while some businesses are puzzled towards the lack of success of their customer service initiatives on social media, others are trying to find solutions to face the increase of contacts and interactions. Hence the hasty conclusion that social media don’t scale. That’s a big mistake. The only fact that the point of contact is overloaded shows that the media scale. What does not is the bandwidth of the system that prevents from processing all customers requests. This limit is not peculiar to the media but to the processus it supports and that can only be removed by organizational actions. The capacity of the point of contact, should it be called community manager or anything else, can be improved by adding more resources, improving the system, redefining people’s tasks and, most of all, refocusing on exception management.

I often say that organizations that use social media for customer relationship purposes split in two groups : those that won’t take any benefit from it and those that will be overwhelmed with their success. In both cases, things have to be made to improve the situation.

â€¢ Those that don’t benefit from their initiative : poor understanding of customer expectations, interaction refusal,Â  absence of a service logic in communication activities.

â€¢ Those that are victim of their success : their understood what was the good positioning, had the right proposition of value for their customers…and were so successful that they can’t keep up with the load, what prevent them for keeping their promises and, then, creates a deceptive feeling among their customers that spreads and harm their reputation.

Today, I’d like to focus on this second group.

To find themselves in such a situation that can be described as a “rich people problem”, these businesses understood that beyond community management they had to have a processus approach. Since they offered an actual added value, they met their audience. But, either because of an exceptional event or a linear increase of the workload, they can’t keep up with their commitment anymore.

I’ve been observing something for a couple of months : many organizations that are successful with external facing social media initiatives realize that the internal organization has to be aligned too. Community managers (or whatever you call them) need to interact with internal resources to find solutions to customer problems what implies they can identity and mobilize them. So it’s an expert location issue. If tools and organization don’t make these actions possible, community management becomes a bottleneck where problems pile up without being solved. In conclusion, a scalable channel was used to replicate the same kind of bottlenecks that exist on the traditional channels they were supposed to make up for.

Should iy be executed in a linear or networked way, a processus has a constraint : its bandwidth, determined by the step that at the lowest processing capability. In our example, community management is the constraint of the processus. Said in other words, improving anything in the customer service processus will be without any effect and won’t change anything for customers since the limit is the community manager(s).

Like many airlines, British Airways is using twitter to solve customers problems. Everything works well in normal times but when snow begins to block european airports the switchboard explodes, as this tweet from R. Ray Wang mentioned :

In fact I think that this conclusion is a mistake : this is not the media that doesn’t scale but there a bottleck that limits the scalability of the processus it supports. The only fact that they can’t keep up with tweets is a proof that the media scale, since the amout of incoming messages exploded. What does not scale is the processing.

So what matters is to increase the community management bandwidth, what can be done in some different ways :

â€¢ Remove the problem by changing indicators. State that in such exceptional situations the usual time limit does not apply and the problem disappears. But this is not possible when the load is following a linear trend and the situation is not exceptional at all. Here, the challenge is to explain the decision to the customers…

â€¢ Increase the bandwidth by adding new resources : if two people are dedicated to this activity, maybe some more are needed. Here again, it depends if the situation is the consequence of a linear growth or a momentous problem. In the first case hiring people may be the answer, in the second the good solution would be to train people in the company so they can temporarily be mobilized to help the social media team..

â€¢ Increase the bandwidth by improving the organization. Some times the “point of contact” can receive and acknowledge customers requests but the rest of the organization does not provide the answers as fast as needed. This is often the case when the people in charge don’t have the needed legitimacy to mobilize resources within the organization and is not even tooled to find them. So it’s important to make things clears about people’s roles and authority to make the system work is the most fluid possible way. A community management and networking approach for internal teams may also be a good way to align flexibility and responsiveness in the whole organization for a better customer-centricity.

â€¢ Increase the bandwidth by removing workload. In many cases, this new way of managing the customer relationship started with existing staff that were put in charge of social media activities on top of their existing job. With the increasing success of their initiatives they simply can’t do both anymore. Before thinking of hiring new resources, people assignments have to be cleaned up and their legacy ones given to other people in the organization so they’ll be able to focus on their new ones as a full time job.

â€¢ Bypassing the bottleneck. If adding resources is impossible and operating modes can’t be changed, the last thin that can be done is filtering the flows that goes through the bottleneck. This latter should keep 100% of its capacity for things it’s irreplaceable at and don’t waste its time with things that can be managed in a different way. Customers request can be represented as Gauss curve : 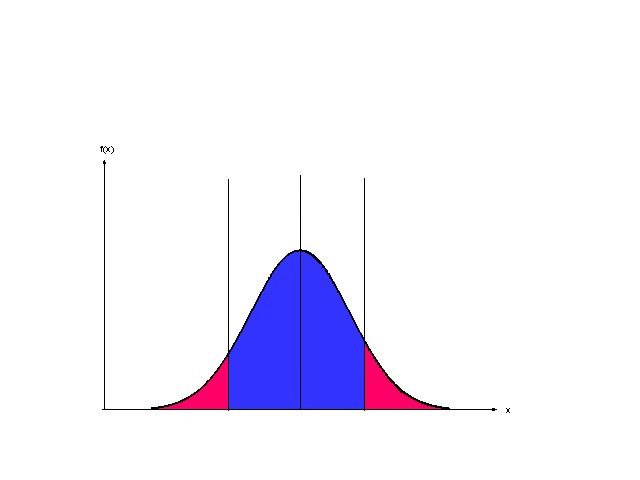 The blue zone is made of all usual and recurring request. The red one is made of rare and exceptional requests. Since it aims at using human capabilities to solve problems where strictly machine driven processes have their limits, the social media enabled customer service should focus on the red zones, what is about managing exceptions. People in charge should be “protected” from anything that’s in the blue zone.

Some may say that in situations such as the one British Airways was facing, everything is obviously an exception. Such an assumption is wrong. That’s not because the even is exceptional that the requests are exceptional tool. What changes is their exceptionally high number.

– should an “operator” be mobilized to rebook after cancelled flight ?

It’s a mass request so the tools that allow such actions should be made easily accessible for anyone, in the airline booking system on their site. 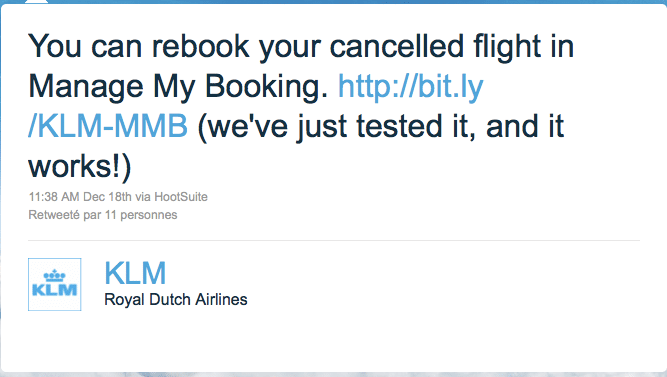 In this case the human person behind the account has only to take care of people who don’t know how to use the booking tools or can’t access them for any reason. One of these reasons may be that the tool is victim of its success : 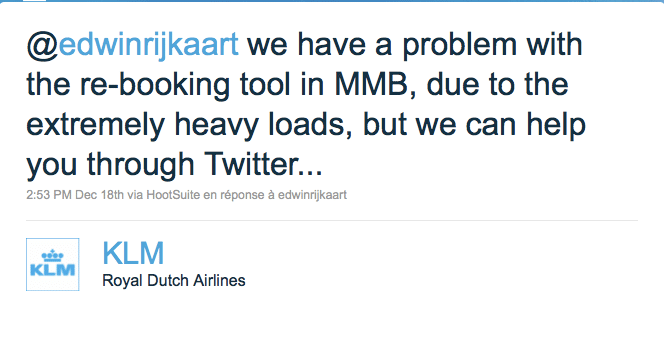 or that traditional channels are overloaded : 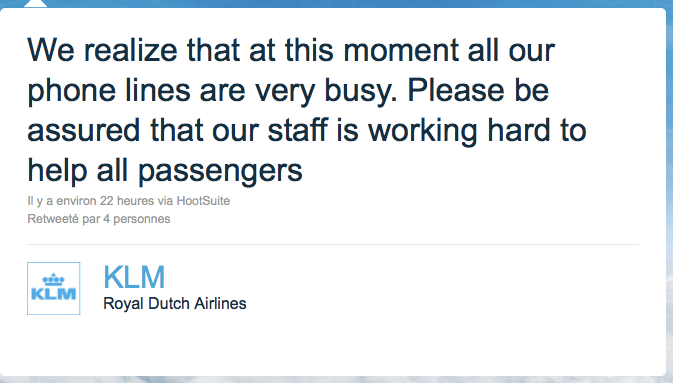 Other case : lost baggage. It’s a very common issue and there’s a specific procedure for such things. In a extreme situation the number of requests punctually explodes. Why overloading the operator with something that can be automated (access to the procedure for instance). Example : my baggage did not follow me. The airline site tells me to print and send a form. I have no time to lose with that so I use twitter to send my request. A better solution would be to make the form accessible and filled online so I don’t need to waste “Mr Twitter’s” time (knowing that the twitter person will only fill a similar form on his computer…).

Then, when the situation improves, better make the information accessible to anyone instead of overloading the point of contact so he’ll have more time for tough problems.

â€¢2Â°) Position the social channel for cases when the traditional service is overloaded, for people that need assistance or can’t use the other tools.

And keep in mind that the main objective is to make sure people won’t have to use the “exception channel”.

Example : last sunday I found myself stranded in Amsterdam, all flights to Paris being cancelled. Last year, at the same period and in the same situation I had the occasion to analyze how airlines were using twitter to assist their customers. This year, when I disembarked from my previous flights, I was informed of the situation and proposed a solution guaranteeing I’ll be home in the middle of the afternoon. Conclusion : Air France-KLM “IRL” service allowed me no to load the social channel and leave it for those needed a specific assistance.

In fact, the #1 rule should be to anticipate things as possible so customers only enter in the exception management loop for good reasons and with requests that need a human person to be handled.

So, here are 5 means to use individually or jointly according to the room for manoeuvre one has to make the processus as scalable as the channel. But don’t claim victory too fast : once your problem will be solved there are many chances the bottleneck will move along the process, on support resources or even the tool… 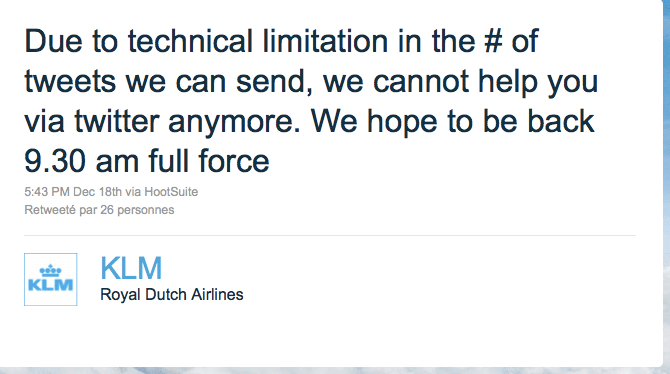 And this is a true scalability issue. Any answer M. Twitter ?

Remember that the added value of human operators is located at the two ends of the normal distribution curve. What is between has to be automated so people who face the customers can focus on cases where they have an irreplaceable added value without wasting their time. Otherwise, if the exception management look is not well designed beforehand there are many chances that quantity will block the system whereas it can be avoided.

Previous article
Picture of the week #24 : Talents are like colors…
Next article
Links for this week (weekly)