Yers and corporate IT : the expected divorce is far from happening

Summary : gen Y-related myths seem to collapse the one after the other. After having been seen as sworn enemies of IT dept’s inflexibility because of their behaviors and the usages that come with, it seems that they’ve given in and happily accept what they’re given. Their opinion on IT departments is even quite positive. The reasons of this gap are worth being understood. Maybe that, for this generation, the struggle is more about the content of work than on tools.

Many things have been said on the famous generation Y. Most of all that this generation, used to simple and efficient tools won’t accept a work environment that looks rather like Jurassic Park and will lead the fight against IT depts found guilty of opposition to change and refusal to listen to the actual concerns of end users.

Members of this generations are now well established in organization and being to have management positions. The time for a first assessment has come. Are Yers the revolutionists we were told they were or, like in many other fields, did they become more consensual than expected (and sometimes feared) and put up with their IT environment without complaining ?

Forrester recently issued a study called “What Gen Y really thinks about your IT department” which conclusions speak for themselves.

â€¢ Yers are getting older and reaching senior positions. Now they can start changing things from the inside instead of complaining.

â€¢ They feel that their personal equipment is better that what they’re given at work but are not more likely to bring their own at work than the elder generations.

â€¢ They’re quite satisfied with the tools they’re provided with at work…and are even more satisfied than the elders.

â€¢ They see IT departments as partners rather than enemies : 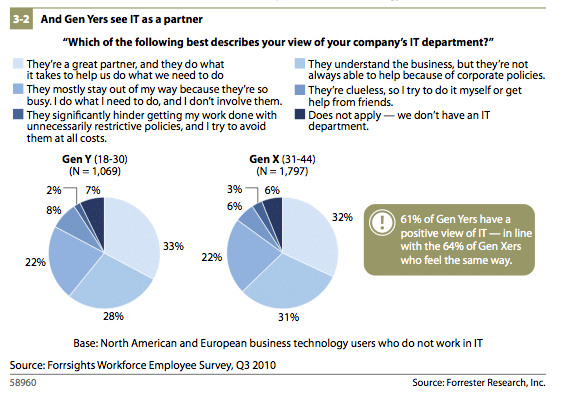 So, what can we say about those numbers that won’t, in fact, surprise many people and only confirms the gap between how Yes have been oversold and what can be seen on the field ? Many possible answers, one not precluding the others.

â€¢ They adjusted to the workplace and fitted in the corporate mould while getting older, having more responsibilities to assume and discovering the constraints of real business.

â€¢ Yers are not tech-savvy, sometimes even less than Xers. They’re more involved with the content of work, the way people, work and collaboration modelsÂ  and usages than with tools. Conclusion : the tools they’re given fit well with their current context and what they’re asked, with how organization actually work and collaborate. If Yers had a fight to lead, it would rather be about management, organization and the content of work instead of tools. Maybe the limit of the consumerization if IT is the one of corporate usages.

â€¢ IT depts are not as corny as it’s commonly said and are adjusting to today’s world.

Previous articleIn Social Business, Businesses are the Care Bears
Next articleLinks for this week (weekly)

Management in the future of work: digital leadership and systemic approach to management

The future of work: agile “by design