No matter your organization is an elephant : it can dance too !

Summary : What makes a social business project successful ? To what extent question the existing and transform the culture ? Is success possible when top managers are not much concerned ? If we observe three major cases, there’ something obvious : the project was tied to an organizational change wanted by deeply involved CEOs. They become social business projects afterwards because they eventually used some new tools to support a years old approach. The example of IBM in the 90s shows that there are little limits to what’s possible and that arguments that “our culture doesn’t make it possible”, “that won’t work here” or “we’re too big to change” are not relevant. 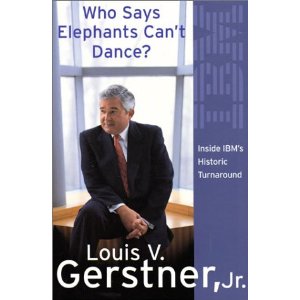 Whatever the way we consider the problem, there is no example of an enterprise dramatically changing the way it operates without a strong leader deeply attached to a vision of business. Nothing new there since this has been proven right for decades even before words like enterprise 2.0 or social business became trendy.

Successful projects have a couple of things in common : a visionary CEO who is deeply involved, a goal at is not about social business and the courage to challenge the corporate culture. And those who fail ? Top executives that are not concerned and not very involved, projects aiming at implementing a social network and a moto looking like “don’t be rough with people, we’re not ready for that”.

Let’s have a look at a couple of cases.

Alcatel-Lucent. Whoever knew this enterprise 5 or 6 years ago should have been surprised when their project came under the highlights. If there were a place where such a thing could not have worked this should have been Alcatel-Lucent. Yes but…one day came Ben Verwayyen. We all know the story. First an email adress so employees could directly interact with him. Then an internal blog. Then, as his own approach was beginning to influence people in the organization, the need for a social network. All of this because his vision of business is made of words like transparency, accountability and that’s the way that he things a business should be run.

Danone. When a CEO (Antoine Riboud) states, in the early 80s, that “The most successful companies are those that think jointly technological change, work design and the changes in internal social relationships.â€ much is said. The rest is about sustaining a strong corporate culture. In th 2000s they started a program called “Networking attitude” to favor interactions, ideas exchange and problem solving. A program that was only about behaviors, management and the human side of the organization at a moment when web 2.0 and social networks did not exist. Technology will come years after and won’t be a break but a way to reinforce the corporate project.

Then IBM. Looking at the success of IBM, not as a vendor selling social business solutions but as a social business itself, is very instructive. But a large part of the lesson is missed if we don’t step back in time to learn from the Louis Gerstner era (1993-2002). I just reread the book he wrote about the time he spent at IBM (he also worked for American Express and Nabisco before), Who said elephants can’t dance

. This book is very instructive for the very reason that, at this time, internet was not what it is today…and concepts like social networks or “anything 2.0″Â  where not even a dream. But, in some ways, Gerstner perfectly set the cornerstones that made social business possible ten years later.

This is a very important lesson for all those who think that “it’s not possible in our company”, “we’re too big to change” or “we don’t have to change…we’re the biggest, we’re the best”.

Let’s start with a couple of words about the context, when Gerstner was appointed to save IBM. The 400.000 employees company, after having been a forerunner and dominated the technlogy industry for decades (it was founded in 1911), was dying. For analysts the question was not to know what IBM was going to do but when it was going to die. A couple of weeks ? A year ? Not more.

At this time IBM was pilling up all dysfunctions we can see in large businesses today. A gigantic organization without responsiveness. An organization able to make major innovations but unable to bring new products to the market. An overgrown bureaucracy (the number of assistants and people reporting to assistants was impressive, as well as the number of people dedicated to support…tens of thousands in europe for example).

Hundreds, if not thousands, of IBM middle- and senior-level executives had assistants assigned to them, drawn from the ranks of the best and brightest of the up-and-coming managers. The tasks were varied, but from what I could understand, AAs had primarily administrative duties and even, at times, secretarial chores. For the most part, AAs organized things, took notes, watched, and, hopefully, learned.

Inability to roll out a global strategyÂ  : since respect for people was a core corporate value, people had the right to refuse to do something they did not found relevant. This even became an official process, the “non-concur process” that organized the way for employees not comply with decision that were made ! The organization was so self-confident that it was focused on itself, on its internal stuff, forgetting its customers and making their interactions with IBM look like hell. To end, an organization made of fiefdoms, with their own agendas, sometimes competing with each other and even against the corporate strategy. To some extent that, when Gerstner stepped in, the only possible was to split IBM into smaller units…and sell them.

Of course, Gerstner made a lot of courageous and clever decisions in terms of strategy, going agains many things that were decided by the previous leadership team. But he could not have been successful without a deep change in the way people worked. Without deep cultural changes, IBM would not have been able to execute his strategy (or even any strategy by the way..)

So Gerstner came with a couple of principles, clearly stated, that were the contrary of how IBM was doing things at this time :

a) I manage by principle, not procedure.
b) The marketplace dictates everything we should do.
c) I’m a big believer in quality, strong competitive strategies and plans, teamwork, payoff for performance, and ethical responsibility.
d) I look for people who work to solve problems and help colleagues. I sack politicians.
e) I am heavily involved in strategy; the rest is yours to implement. Just keep me informed in an informal way. Don’t hide bad information – I hate surprises. Don’t try to blow things by me. Solve problems laterally; don’t keep bringing them up the line.
f) Move fast. If we make mistakes, let them be because we are too fast rather than too slow.
g) Hierarchy means very little to me. Let’s put together in meetings the people who can help solve a problem, regardless of position. Reduce committees and meetings to a minimum. No committee decision making. Let’s have lots of candid, straightforward communications.
h) I don’t completely understand the technology. I’ll need to learn it, but don’t expect me to master it. The unit leaders must be the translators into business terms for me.

A large part of the book is about business decisions, sometimes contrary to what “normalcy” would have suggested, but most of it is about how he made things work, how he put his principles at work. A whole part is dedicated to corporate culture, a sacred cow no one dares challenging…what he did because it was leading the enteprise to the grave. Same for HR with a dramatic change in the compensation and benefits system, rewards, career management etc…

The book also reveals some crunchy details. For example :

â€¢ Gerstner decided to keep employees informed of what was going on as often as possible. Some answers to his messages, positive or even very negative, are quoted in the book. He used email to do so, what was a disruptive way to inform employees in 1992. Some managers did not want things to change. What did they do ? They blocked email coming from the CEO so employees will not receive them…

Whatâ€™s striking from my notes is the absence of any mention of culture, teamwork, customers, or leadershipâ€”the elements that turned out to be the toughest challenges at IBM.

In the end, we can understand how IBM eventually became a global and coherent organization, that turns its internal wealth (people, knowledge) a shared asset and not a burden like it was before. For those who are scared of loosing control, here’s what he said :

If IBM has become what we know today, we need other explanation that the tools they use (and sell). We have to get back to Gerstner to understand how things become possible. That’s also why, years before customers show interest for such products, they built their own enterprise social network : because it was a way to sustain their organization, to enable the way work supposed to be done at IBM.

So let’s come back to the original topic of this post. At a time when enterprises are questioning their social business approach, the benefits, this examples are more than meaningful. Leaders started with a vision of business, embodied by a deeply involved CEO and eventually ended by implementing tools (there are also examples of businesses being successful without technology…we’ll talk about it in future post). It took time, years, to move from the organizational stuff to using technology.

Gerstner shows us that nothing is impossible, that arguments relying on history, size, culture are irrelevant when one has the courage to make things happen. I only hope that today’s leaders won’t wait until they are in the same situation as IBM as (change or die) to find this courage.

Now…last not but least. What would Alcatel-Lucent look like today without Verwayyen, Danone without Riboud, IBM without Gerster. At least one would have disappeared and the other would be very different…

Previous articleIf it matters measure it. If it’s new build a new frame of reference.
Next articleInformation leaks on social networks : that’s not the problem