Social Technologies may increase productivity by 25%

Summary : according to a recent McKinsey study, organization may expect a 25% increase in productivity from social technologies. But, behind this appealing headline, the conclusions remain the same : nothing will happen until organizations conduct deep change programs, what put the promise into perspective and shows that the original matter of the study is not what matters. More surprising, the study adopts a generalist approach to social media (sharing and networking) overlooking operational and process related issues. Finally, even many interesting figures can be found, the final result is something very conventional that adds nothing new to issues that have been known for months. A missed opportunity.

McKinsey is used to publish very interesting studies on the evolution of organizations in the context of the emergence of social technologies. That’s why I read their last publication, titled “The social economy: Unlocking value and productivity through social technologies” with attention. Of course I won’t summarize here the 184 pages of the study but mentions some points that caught my attention.

So let’s start with productivity since it’s the matter highlighted by McKinsey to make us feel like reading the rest. We all know that social technologies can bring a substantial increase in productivity but there were few concrete things on what and how much. For the first time we have tangible figures : 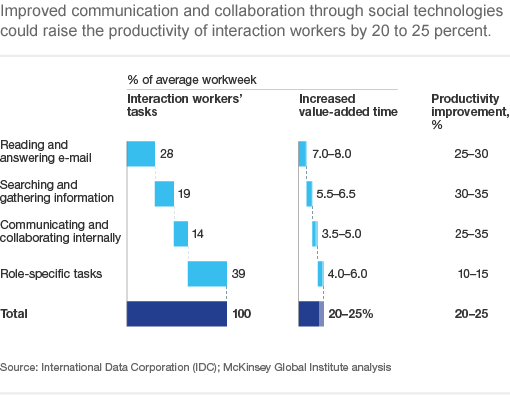 What means a 25% increase in productivity provided organizations fully embrace the full range of social technologies. On the other hand, it’s interesting to know how they got such figures. First, workers have been segmented into a couple of profile type depending on what prevails in their work (production, interactions, transactions). Then the time dedicated to their key tasks was measured as well as possible gains from the use of social technologies. In fact the gains were not exactly measured because, apart from lesson learned from some cases, it’s mainly estimations relying on….what experts, evangelists and vendors say. So even if such figures are better than no figures, there’s a lot of room for estimation and subjectivity. Maybe too much. But, even if the 25% are wrong and reality is closer than 5 or 10%, the game is worth the candle. So let’s move forward.

McKinsey also confirms that most businesses are still very far from seeing any significant improvement. Nothing new except for whom has been in denial for years and likes it. Using social technologies, even massively, does not mean anything will improve, most of all if they’re confined to over the flow the flow activities or to keep virtual communities alive through artificial respiration. So, since the focus of the study is productivity, there’s no surprise if McKinsey says we’re still at the very beginning of the journey.

In fact, what surprised me the most was a kind of contradiction between and the survey’s baseline and its content.

As a matter of fact, the introduction is rather techno-centric and could be summarized by : the more social technology you’ll use, the closer you’ll be to the 25%. But what does the study say ?

“We recognize that this level of productivity improvement does not come about simply by deploying new technology. It will require both a successful implementation of the appropriate tools, and, more importantly, climbing a steep organizational learning curve: changes in processes, organization, mindsets, and behaviors will be needed to build up habits of open communication and information sharing, particularly when ideas and knowledge must flow across functional silos.”

Nothing new under the sun. Nothing will improive until behaviors, processes and organization change. The poor results achieved by only deploying technology was just a reminder that organizations had to deal with things they hoped not having to change because of a kind of magic power tools were supposed to have. No matter : so organizations will adapt to make the most of their tools. And that’s where the shoe pinches. On can see this as one more chicken and egg question and say that the order in which things are done does not matter but facts seems to say that the order actually matters. As a matter of fact :

– as McKinsey says (and as anyone could see in the field), organizations that started with tools struggle at benefiting from social technologies.

– as anyone can see in any business, it’s hard to trigger adhesion on a change which reason is to make the most of a technology that’s been previously unsuccessfully implemented. In fact, in most cases, technology was chosen first because the purpose was to cause an instant change without changing anything in the organization because workers would rush towards communities, share and network as it was the only thing they’ve been expecting for years to improve their work. In fact the belief that employees will make the organization social, all by themselves, set a new order and support the risk of change alone was a fallacy. Most of those who started with tools did it purposely because they did not want to change the system, so there’s few chances to see them doing so afterwards.

– there are many organizations who adopted these new organization models and behaviors. Hamel’s new book is also full of great examples. All these cases have something in common : either there’s no place for tools in the program either they came as a means, once the organization change have been done. That’s also the case of many cases mentioned in the report : there was a global project at the beginning and none of these businesses tried to change to see what they could do with the tools they bought.

By the way it would be very interesting to find what part of the gain is due to technologies, what is due to organizational change and what each one taken alone can bring.

So I’m surprised to see that, even if my previous points are understood and somehow mentioned in the study, everything is seen from a technology standpoint while it clearly appears that the matter is more the transformation of organization (possibly) enabled by technology.

Another surprising thing. Even if the study explains very well what are social technologies, there’s nothing on things like Social BPM or Adaptive Case Management that are fully or partly in this field. Business processes are mentioned in only one paragraph and only through distribution, crowdsourcing and “mechanical turks”. A real pity because so much more could be said on such matters.

That said, what businesses will like in this report is an analysis by industry and activity that clearly shows what social technologies can improve in each ease, what are the fields where the biggest gain can be expected and why such or such industries are lagging behind.

But I regret this study is only focused on sharing and networking. Of course it’s a part of the scope but with little interest if not taken jointly with processes. So no surprise we find the usual conclusion :

Ultimately, the power of social technologies hinges on the full and enthusiastic participation of employees who are not afraid to share their thoughts and trust that their contributions will be respected.

I know many leaders who are expecting something more structured and rational about that. And I’m not sure that waiting for the “full and enthusiastic participation”of employees will help a lot do undertake the needed changes. It’s time to move to the next step, as Josh Greenbaum said, quoted by Mike Gotta :

Taking the concept of â€œsmart harnessingâ€ to a higher level, organizations need to avoid limiting themselves to broad knowledge sharing goals. Instead, leadership teams should focus on complex business issues where the impact of payoff of these tools can transform the way work is done, as well as the desired outcome of those activities. The bottom-line? Strategists should be aggressive and apply these practices and tools to transform the way serious work is done.

But there’s not a line to read about that. That’s a pity because the limits of current approaches have been known and discussed for at least two years, so there was a fantastic opportunity to go further and really tell businesses what it’s all really about. A missed opportunity, as if talking about social means one should focus on conventional and superficial things about work and never have a more technical approach.

In the end, this study will be helpful for some businesses to get a couple of things. But the most advanced or rational one will find it regrettable to find nothing more than known issues and no real propositions to go further on more specific matters.

Previous articleLinks for this week (weekly)
Next articleDo recruiters have still a role in recruitment ? And which one ?