What new capabilities did organizations acquire in the last 7 years ?

Summary : good intentions and passion are useful but not enough. More than individual initiatives happening on the fringe of the organizational model (and sometimes against it), businesses need to develop a really new of way of doing things. While the “enterprise 2.0” or “social business” has been around for about seven years, where did we get ? Nearly nowhere. And there are few chances to see any progress until businesses take things by the right end.

I recently wrote about the conductive organization. One of the main things I’ve learned from it is the need to develop new capabilities. As a matter of fact one can fluidify and improve the way information circulates but it does not mean that this information will become knowledge so employees will be able to use it instead of making it a constraints in a system where using one’s knowledge to improve operations is impossible.

Then there are two approaches. One, purposely or not but what matters is the final result, results in saying “don’t touch the system, let passionate and well-intentioned employees develop new practices, in addition or even against what’s prescribes the system”. We’ll see what happen in the future but I bet that is not a sustainable way to tackle deep problems and make change sustainable.

The other results in changing the system. Not in a vague way but on well defined points. That’s the capabilities Saint-Onge and Armstrong wrote about. I won’t list all what they suggest and I strong advise you to read what I consider being one of the best books ever written on enterprise 2.0 or social business before the word existed, a book that those who look for more than hazy adoption and passion based logics will love. Believe me : with such an approach, tools will follow and be adopted with very few questions.

That said, remember that the matter has been around for seven years. That’s enough to say that’s it’s not an emerging topic anymore but has become a major trend, even if emergence is nice to justify lots of approximations. But, in the last seven years, what real improvement (I mean organizations really deciding to change the way things are done and make it the official way) did happen, what capabilities were acquired because of a structured and voluntarist program on the following points ?

– decision making ? In general, at the level of a team, a project… should decisions be make differently, with what information, involving whom ?

– subsidiarity ; that’s a word I like better than autonomy. In which circumstances should one forward a point or deal with his own problems at his own level so his superiors will have time to focus onÂ  their own mission ?

– reporting : what kind of information should be visible by anyone to make collaboration and self-organization easier…and to what extent ? And how to give managers enough visibility so they could see and understand what’s coming without having to interrupt workers and keep time-consuming formal reporting for key things only ? That’s all about observable work.

– leadership : talking about it is nice, developing is is better. What kind of leadership is needed, how to make current leaders change, should new ones emerge in addition to them or to replace them ? Take it into account in the recruitment process so those who’ll join will fit in the desired model instead of the usual “we want such kind of people but hire the opposite because…with such a CV even if the guy is an ass-hole that makes his staff suffer he’s good at short-term results”.

– time allocation and management : learn while working, share, participate….many activities that should be key in future organizations but can’t resist to a cost-allocation driven system that makes any activity not mentioned in one’s mission an job description irrelevant and a waste of time, whatever its impact on a more global scale. One more evidence that the knowledge economy does not exist as such. A whole measurement system has to be invented in organizations where the most important assets are seen as costs to be banned.

I really love this slide taken from a presentation by Rawn Shah. 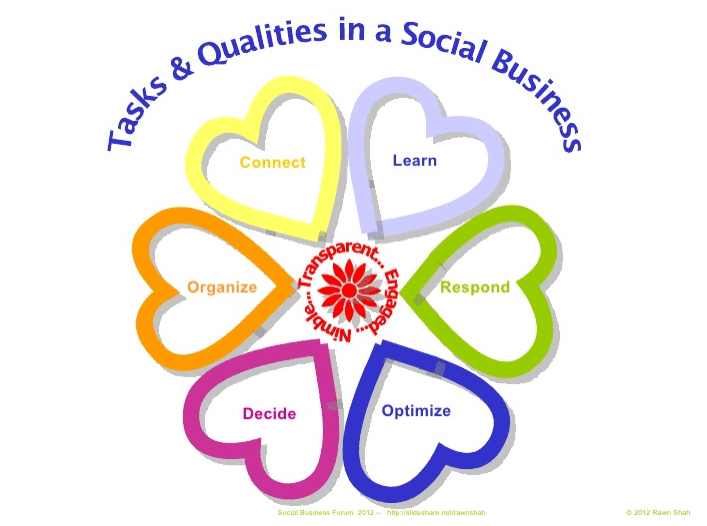 I admit that many things have improved on the “connect” side, even if there’s still a lot to do. But what about the rest ? In terms of organization, structure, going beyond surface change and the usual “make people feel like changing but leave the system untouched, let them discover the limitsÂ  and assume the risk” ? Nothing. Note that this points are also well dealt with in Armstrong and Saint-Onge’s book even if they did not have all the technology we have right now. What proves that the real matter is elsewhere…

The only thing organizations learnt about is community management. Without clearly understanding that not every problem can be solved by communities and that trying to make anything fit into communities will just result in discrediting the whole approach.

As Susan Scrupski wrote, the time of evangelism is over, now what matter is large scale execution. What will need radically new approaches and the courage to deal with real matters.