In brief: used to rely on technical partners,Â  software vendors will need to explore new kinds of partnership to effectively address the enterprise social software market. More than paying attention to new players, that’s also about rethinking the very notion of partnership and reinventing their programs.

Last autumn I saw this tweet fromÂ  Ray Wang who was sharing his thoughts on the relationships between enterprise social software vendors and their partners. 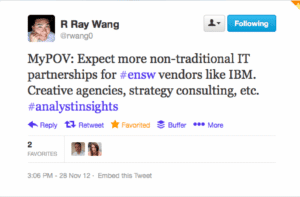 That’s not an easy matter but it echoes what many customers consider and some vendors now consider as a real concern regarding to the new nature of this kind of solution.

Historically, vendors set up ecosystems of technical partners. They provide the software and the others install and integrate it. One company, one part of the job. And the second quickly become business partners, increasing the vendor’s sales force and ensuring a permanent presence on the customer’s premises. The technical partner became a reseller in a win-win system.

While concerns were moving away from infrastructure and getting closer to business, technology started to support changes that directly impacted end users. So vendor partners started to develop business consulting units to complete their offer. For the best or the worse. That’s not easy to host and develop such competences in business which core business is and will remain technical and where consulting is not meant to do anything else than supporting technology. What limits its scope of action and often makes it intervene too late. Consequently, apart from a couple of successful examples, consulting activities are often outlying and “good enough” ones, the partner’s core competences being elsewhere. Some vendors also tried to build their own consulting activities that, because of the consulting DNA often wanted to be as independent as possible and no be tied to a given technology. In short, hosting a real business consulting expertise is neither easy for software vendors nor for their technical partners.

A situation that’s not easy to handle but that most vendors manage in quite a good way even if not exceptional.

Things begin to get worse when these vendors began to address the Social Business market. As a matter of fact, even it the technological stake is huge, the success of technology has never depended as much on non technical factors tha now. And the matter is so wide that social business projects may need to mobilize a stream of various expertise. And experience shows that integration/reselling partners struggle at fully playing their part of the job on this market. first for a matter of competences (it’s not easy to have enough of so specific competences when they’re not your core business…and it may even not be profitable), second because the customer has changed. Social Business projects seldom start at IT departments andÂ  they can even start from anywhere but the IT department. That means partners need new contacts and a new discourse to talk to business, HR, communication people that don’t get the tool discourse and don’t even want to hear it.

This field is owned by another kindÂ  of service providers. Sometimes general practitioners, sometimes niche pure-players, seldom technology lovers and with an IT culture close to level zero. They often look at technology with the same eyes as the customer’s : they want it to work and don’t care about the hows and whys.

New partners and a new culture of partnerships

As Ray said in his tweet, vendors now need to work with these new partners. A first sight that’s very easy : software vendors are quite good at managing partners and channels. Some even say that once you’ve managed partner alliances for a large software company you can do it anywhere. But, in fact, that’s a Copernican revolution that’s coming. A revolution that will take time, effort, and will question the vendor’s culture.

As a matter of fact :

– These partners have a different culture. The dialogue between a vendor and a communication agency or an HR consulting company is not obvious at all. Their constraints are often opposite, as they way they work. It can lead to a global misunderstanding.

– These partners are not on their radars : apart from some “majors”, they’ll have to identify niche and local players.

– Because of their size, specialization and the need to stay independent and agnostic, those partners will often refuse to make money from licence selling. They don’t have the culture to do so and even not the means for a dedicated staff.

– While these partners have a “business and usage” expertise, vendors only certify technological competences. Hence a problem in terms of recognition and “quality labels”.

– In terms of enablement the technical trainings offered by vendors don’t meet these partner’s needs.

In other words, in 90% of cases, the partners Ray mentions are not even qualified to apply to vendor’s partnerships programs. And when vendors try to set up “parallel” programs, out of the official process, it takes a lot of time and energy on both sides to learn to work together, understand each other’s needs and find how to meet them.

Vendors to reinvent their partnership programs

I’all also add a last point. The challenge for vendors will not only about working with these partners, but make them work with their traditional integrator partners. The two partners will have to understand each other, learn to work together, build common approaches and methodologies instead of having two parallel ones. And then again, building such “duos” with the required level of trust, able to understand one another and speak with a single voice is everything but simple.

But that’s what customers are requesting. What makes sense to them. An end-to-end approach covering all the matters and not just of part of each ones, an unified approach that will save them from having to manage a lot of heterogeneous partners on a single project.

The good news is that vendors are moving ahead. Maybe in a more natural fashion for small pure players but I can attest to the will of some large players, locally, to work this way. I say locally because, at the beginning, such things are more a matter of people than of businesses. And the gains are worth it for all the people involved. Customer included.

Learning to work with a vendor

On the other hand, knowing the time, the energy and even the risks such approaches involve to have the expected payback, one thing is sure : “channel and alliances managers” will have to reinvent their programs and operate a major change in DNA in the upcoming months or years. And these new partners will also have to become bilingual because understanding each other requires all parts make their part of the effort.

Not easy but exciting…