It happens once or twice or year : McKinsey issues its report on the state of the networked enterprise (the in-house word for social business, enterprise 2.0, collaborative enterprise etc). And as usual everybody pounces on it. And as usual people try to make something of it, facing a strange paradox : the more things more forward the less there’s to say. Even when you’re McKinsey.

So the survey is titled “Evolution of the Networked Enterprise” and from the very first lines we can know it’s about social media adoption in the workplace. I can hear that from anyone, from a vendor, from a consultant considering that his practice of facebook is enough to make him the next Peter Drucker, from a project manager stuck in a project that’s been assigned to him during in a lottery game. But not from McKinsey. Why having invented the 7S if it’s to tie an organizational model to the use of a given technology ?

We already had something similar with a tacky title promising stratospheric productivity improvements with social technology…provided businesses change their culture, organization and processes – what tells a lot on the role of technology – so let’s see if this survey is in the same trend.

â€¢Wer’re told that global adoption is progressing. Notwithstanding the fact that, once for all, I consider adoption as one of the more dangerous and stupid ideas since it make employees carry the weight and support the risks tof change alone in an organization that does not question itself (and can punish employees going aingainst a system that does not change), I can’t see here anything looking like a clear increase. I see light underlying progress, stagnation and even decline. 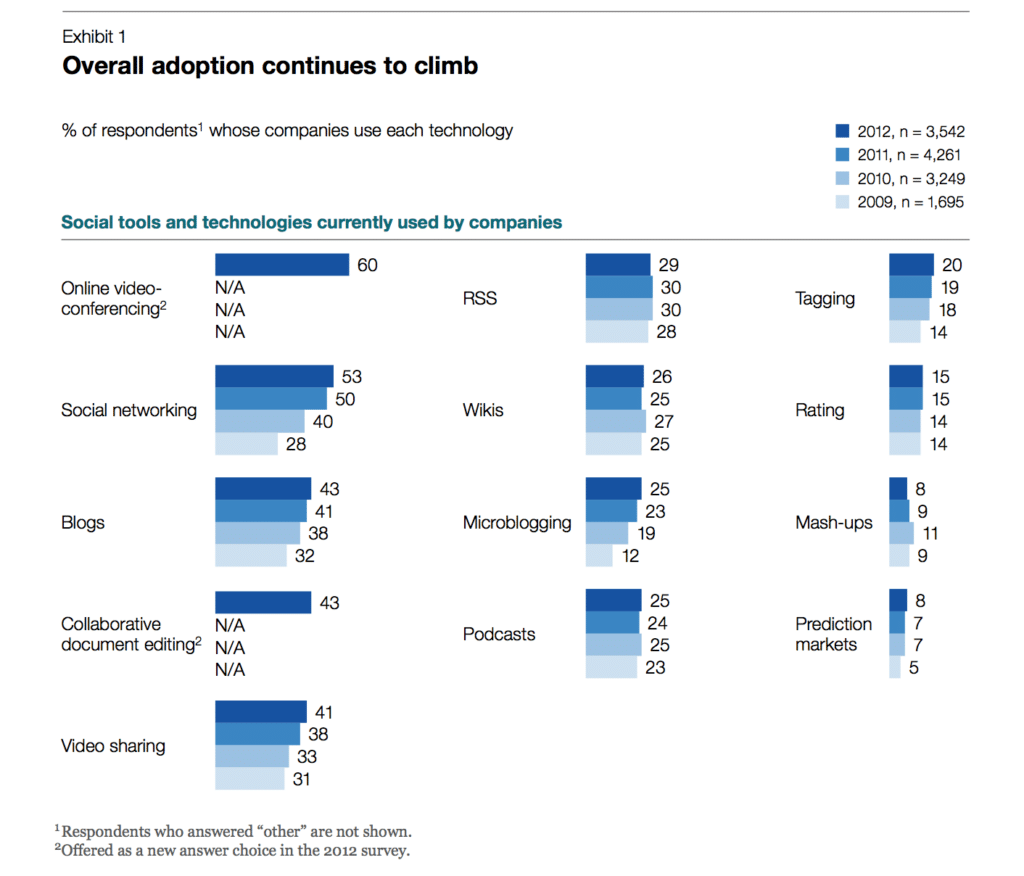 Moreover, anyone knowing the matter knows that there’s a huge difference between “businesses using a technology” what means having deployed and productive use by employees.

Besides that we’re told that the number of fully networked enterprises has increased by 11% in the two last years. But if it’s measured on the number of technology used and not on organizational and work models it does not mean that much.

We could discuss this matter and the effort needed for such projects to bear fruits for hours. As the report I mentioned above said, two things are needed to get all the possible benefits from such projects : a systemic change and/or a strong governance.

We’re still far from the first, what explains that businesses need to get their second wind after the first quick wins. As for the second we can see that some matters are easier to address than others and that’s changing travel policies is easier than dealing with some sacred cows.

Anyway, talking about benefits, even if I’m one of the strongest believer of their potential (even if I’m not always convinced by the way they’re showcased), I would like, in 2013, to stop reading “according to executives”, “businesses say that…” because it will make social business, enterprise 2.0 and social media die from lack of credibility by absence of measure and incapability of tracking value. As Deming used to say :

“In God we trust. All others must bring data” !

The purpose of such reports is not to convince me an my peers but give “average” and normal people tools to understand, assess and drive. Surprising ?

Two interesting pointsÂ  that can’t be discussed : mobile usages are increasing what is a good news because it reflects what work actually is. No we have to stay lucid : it’s more a gap being filled that a major move forward. Moreover mobile is often seen as making mobile versions of desktop applications while it’s actually a new paradigm to understand and a new value proposition to reinvent for new and contextualized use cases. We’ll discuss this point in a future post.

No surprise for Big Data : after having praising for content for the sake of content businesse are realizing that they can make sense of interactions and derive value from it. Anyway, the future of social surely lies in decision making.

â€¢ Nothing new on risks

Businesses still fear data leaks and threat to reputation. In both cases it’s more an awareness matter because those risks are more behavioral than technological.

Has technology become its own constraint ?

â€¢ Technology as a constraint

Businesses see that social technology could support new processes but they find limits caused by their own technology constraints. Sorry but I find it difficult to understand what they mean.

All these points are legitimate but more details would have been appreciated. On the other hand I really would love to meet the companies that say they have no technology constraint.

To end with this point, that’s the very first time I hear of technology constraints as barriers to a transformational project…except if they’re seen from the start as the perfect scapegoat of a change no one wants to drive. And if businesses consider it’s all about technology, seeing technology as a barrier to technology is quite ironic.

My conclusion ? As said in the title of this post there’s absolutely nothing new, nothing practitioners don’t know. That’s surely what explains the global stagnation of such project (what seems to be a taboo word…since 1% increases are often shown as awesome progresses), leaders being themselves trying to get their second wind. But what stuns me as that so serious companies can still see this matter as the use of social technologies while they have powerful matrix and methodologies to assess organizational transformation. Or maybe they’re still stuck in 2012 ?

In short you’ll learn nothing there except if you’re trying to reassure yourself and justify your own procrastination. Others will make a better use of their time finding the indicators they want to impact and align their management, decision making models, structure and tools with how people should work to improve things. But if it’s too difficult, this report will be a good way to tell your boss “don’t worry, all the others are stuck too !”.