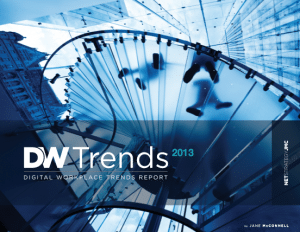 Like every year, Jane McConnell issues her report on the Digital Workplace trends after having assessed 362 organizations around the world. I won’t explain in detail each of the 169 pages but share a couple of comments, on the flow, as if I was reading it with you. For those who’d be interested in reading the full survey, it’s on sale here and the executive summary can be downloaded for free.

The digital workplace is an intranet that has succeeded

First note that the name “digital workplaces” definitively replaces “intranet”. That’s not a matter of branding : traditional intranets mainly dedicated to communication and including a couple of services is dead of no being able to become the unavoidable space of life and work that the digital workplace aims at becoming. Ironically we could even define the digital workplace as an intranet that have succeeded.

Businesses expectations towards digital workplaces look contradictory to me : organizational intelligence and cost reduction comes first, business performance last. I would like someone to explain me why the first is not a necessary condition to get the third, which impacts the second. Speed and agility comes just before business performance.

Anyway, it’s coherent with what we can see on the field : either in desperation or by lack of maturity, many businesses still hope to rely on technology to get tangible results without having to change the system. I’ll comment another day the Gartner study that says that only 10% of social networking projects succeed but the issue is quite similar here. For those interested in the matter, please read this post by Oscar Berg, and this one by me. What the report makes clear is that behind technology it’s all about enterprise transformation.

What is surprising is that most respondent say that their project is aligned with strategic goals, what should mean that this point is clear. Future will tell but we may think that if these projects actually support the corporate strategy, they’re still in their early age and the conditions that makes a digital worplace support a strategy are still vague.

An opinion confirmed by the gap existing between early adopters’ discourses and others’.

â€¢ Blue collars get it

That’s one of the most surprising findings of the survey : the challenge is seen as more vital by blue collars organizations than white collars one. This is the end of a myth and a good thing. I think there are simple explanation to that : these populations are under equipped (or even not equipped at all) so there’s a big gap to bridge and the impact of better communication and collaboration on their work is more easy to see. Moreover, for these populations, change is often more pragmatic and less politic than for white collars. Maybe you’d like to read this old post one blue collars organizations. Maybe the current difficulties these business face urge them to undertake transformational programs.

Question : does the fact that blue collars organizations consider “belonging and engagement” as more important than white collars ones do means that they’ve been lagging in this field for a long time of than communication is more important to them than execution ?

It’s clear for anyone : talking about transformational programs the backing from top management is required. But with some slight differences.

Top management seems to be mure more involved at early adopters where they actively participate instead of being passive observers.

Mobility : new experience and value models to be built

That’s a key point that’s seen as a main priority, mostly because of official or tolerated BYOD. That said I see a major challenge coming : if the survey shows that mobility is mainly saw as meeting the needs and top managers and nomad workers, I don’t think this vision will last. First because mobility concerns everybody, then because it’s much more than turning desktop applications into mobile ones. It’s about reinventing the user experience and a value proposal based on contextual uses with a focus on activities instead of contents.

There will soon be a need to review all the work that’s been done.

After the Real Story Group report, here’s, at last, a second document establishing a difference between structured and social collaboration, showing that both are complementary because they don’t address the same need and does not fail into the trap of “social anything” that replaces everything, structures nothing and establishes serendipity as a management principle. Thank you Jane !

Functionalities do not create needs or drive adoption

Two trends appears here : mature early adopters and a majority lagging far behind, even when it comes to very simple things that comments or rich profiles. When I say lagging I don’t even compare to early adopters : it seems that for the majority few things have changed since….2008. That’s both normal and worrying. Normal because if uses are linked to a strategic project that’s the proof of the gap that still exists between what our world is and the may many leaders still see it. Worrying because beyond Digital workplaces there are organizational challenges businesses seem unable to deal with.

What is confirmed bu the study : either early adopters or late majority, everyone seems to be disappointed by tool adoption. It takes a lot of time, even at early adopters’. The situation is even worse when it comes to enterprise social networks.

The reason ? In my opinion, still the one I mentioned above. Tools are part of a transformational project and the naturel reflex is to focus on the project and avoid transformation until there’s no other solution. Joking aside, the 3rd era of social business is coming but is still in its infancy.

That’s all for the first part of my takes. To be followed next week.