Is Social Business about good intentions or war ? 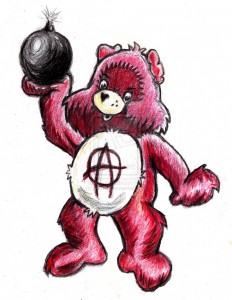 A couple of weeks ago Anthony Poncier said that despite of appearances, more and more social business and enterprise social networks projects were not – or less and less- looking like the Care Bears world they used to. Anyway, reputations dies hard.

It’s true that the way things are explained and the vocabulary being used may surprise the most business focused and rational people. As a matter of fact we often hear about the natural will and need to “do things together”, kindness, passion and, in the end, of the invisible hand of human nature. Others would also mention that jealousy and mistrust are also parts ofÂ  human nature.

In short, social networking tools and approaches would be supposed to enable the expression of natural positive behaviors to establish a world where everybody, employees, businesses – competing or not -Â  customers would adopt win-win relationships made of mutual and reciprocal attention and kindness.

The illusion of a pacified business

What was perfectly summed-up by someone I was discussing the matter with : “Before, business was war, tomorrow it will be pacific collaboration”.

If I liked the analogy with war, I’d rather say this in other words that are closer to my perception : “before, business was war, tomorrow it will be guerilla”.

What we can see these days is the emergence of new tools and strategy designed for guerilla. An idea that’s very close to all that has been said and written on guerilla marketing to explain the best practices to adopt on social media.

As a matter of fact what has changed is the field. The D-Day beaches and the plains of Napoleonic battles won’t host battles anymore and are replaced by hostile and changing jungles where visibility is low, ambushes easy and where adapting to the field is the first battle that has to be won (sometimes against oneself).

Social business is mass tactics replaced by masses of tactics

New field means new tactics. It’s not about aligning thousands of people in rows anymore but about enabling commandos, small, responsive and autonomous teams, able to survive and get itself organized without the help of the HQ – even if the latter is still in charge of the global strategy. What we need now is small teams able to coordinate together when the “head” is too far from the battlefield,Â  does not know the context enough or is even not able to command anymore.

The field can be one’s worse enemy or best friend depending on one’s ability to understand it, to know its codes. There’s no need to remind you of the story of the businesses that tried to use Facebook, Twitter and even the web with generals trained for mass and top down strategies.

On this field, the local population (employees and internauts) is a stakeholder of the battle. Sometimes neutral, sometimes ally of one or the other side, sometimes deceitful and traitor, able to change side in the middle of the conflict. So businesses need to know this population, understand it, be accepted, prove they’re acceptable in order to have them on their side. But they need to be aware that any unkept promise, any opponent coming with better arguments (weapons ?), any decline in leadership or trust will cause disengagement and make the population join their opponent. Yes, leadership, engagement and trust have never been that important because when collaboration happens its based on trust and have a limited duration. The conditions of collaboration have to be renewed day after day, leading by the example. Others are more important than ever because without them you strategy is doomed to fail.

One don’t win a war with weapons only. A war is also won by convictions, making as many people as possible join your army. To be successful in having people joining you’ll have to turn local people into ambassadors who will carry your message towards their peers. One more reason to consider them as partners and stakeholders. These new wars are also values wars.

On this new field visibility is low and intelligence matters more than ever. Intelligence will come from the ties build with local populations and signals send from the field provided one is able to analyze and understand the field. It’s all about big data and cognitive computing.

Who says autonomy on an hostile ground says ability to handle exceptions. Giving the right information to people on the field and develop their ability to create and innovate is key to their survival as well as your army’s.

This is also the end of massive destruction weapons, intranets and mass media. Welcome in the era of specialized tools. A mass of tools that are used in a specific way, in a given context for a precise mission.

Sharing and collaboration : a matter of survival

No one should be abused by the behaviors observed at the periphery of the battlefield. What is often seen as well-intentioned sharing is nothing more than optimizing the use of scare resources. No one shares information, no one consumes collaboratively : they just optimize the value of what they have. It’s a matter of survival.

Second, this is not about being social â€“ it is about business done at the intersection with collaboration, in a way like never before

If you used to find the perfect world of social business and social networks unrealistic compared to how they see the world, please be reassured. That’s still a competition, a war, certainly one of the toughest business had to conduct. A war that requires a perfect understanding of field, to build reversible relationships and alliances. Their goal will always be to beat their opponent, gain ground, have the bests joining them, expel enemies from their bastions. But the way of doing things will change.

Previous articleThe individalization of custmer relationship : why and how ?
Next articleSocial media make critical thinking critical