If there’s a competence and attitude anyone should develop because it has become critical to survive in the era of the web and social media, it’s critical thinking. How many Hoax do circulate, even sincerely, on Twitter, Facebook or elsewhere ? One can argue it was already the case with email and that’s true. What changes is the virality and power of the message.

The ability anyone has to publish information and the speed at which it spreads worries people. It worries those who have grown up in a top-down system and whose mind can’t accept that one can’t say or publish something without the approval of a legitimate authority. It worries those who get this new paradigm but are aware of the dangers that comes with and moan about the incapability of crowds to manage this new situation. That’s a concern for both businesses with the proliferation of collaboration spaces, social networks and internal communication tools and the society that recently assessed the impact of a malicious tweet that was close to trigger a stock market crash.

Before going further we need to make something clear. A wrong information is not always shared with malicious intentions. Sometimes that’s the result of a bad understanding, sometimes it’s humor (even if the consequences can be dramatic) and sometimes there’s a real will to harm. Then there are, of courses, fields where the freedom of speech can be regulated and some level of validation needed. That’s obvious in the enterprise and may also be, in some cases, outside.

So, acknowledging the possibly dramatic consequences of the phenomenon, some suggest -even reluctantly – that publishing information should be regulated. Of course some things should be forbidden and punished but controlling publishing is not the right solution. First because it’s technically impossible. Then because, from a moral standpoint, we all know where societies that begin to decide what is true or not and who decides what’s true often take a dangerous path. 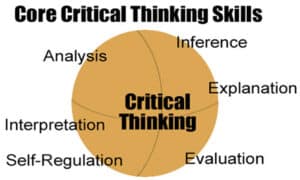 So the solution is not to be found at the publisher’s level but at the reader’s. Considering the increasing mass of information being published and to which anyone is exposed, what matters is to learn to to separate the wheat from the chaff . Check the sources, question the credibility of the information, compare with other sources. In short showing critical thinking. Obvious ? In theory yes, but in fact the maturity of the large maturity is quite worrying.

Critical thinking is a critical competence in the information society

For some it’s a natural attitude. But for most people that’s a new reflex, behavior and attitude to adopt. But where and when ? As is many other fields like collaboration, good practices are learned at school. But, according to my own experience, the system is designed to deliver an unquestionable true. I even remind of teachers who considered any question as being questioned themselves. And the more we wait the more bad habits take root. Recently a french teacher set a trap for his students. He built false sites and wikipedia pages about an author that never existed. Nearly none of of them cross-checked, questioned the information and they all fell in the trap. Don’t expert this competence to be taught at work either. Enterprises are not the kind of place where people who question things, doubt, double-check information are appreciated.

Those who own the knowledge should teach others to question it

Anyway, critical thinking becomes essential to the good functioning of our society and enterprises and that’s a major competence in the information era. If we want to trust people, our children, employees, staff and their ability to make the right decisions in this context we should first teach them to question anything they’re told, anything they read. Even if it comes from us. Paradoxical but vital.

Previous article
Is Social Business about good intentions or war ?
Next article
Links for this week (weekly)