Social Media Policies Do Not Bind Employees Only 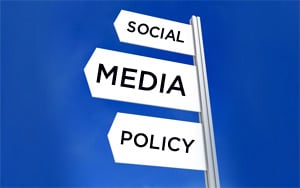 Social media policies are an important matter for businesses. Not only for using internal communication and collaboration tools but also for the use of consumer-web tools both as an individual or as employee. The “as an individual” may sounds suprising but facts are facts : people will always end linking a person to his job and businesses may be impacted by the private behaviors of their employees. But not that it’s also true for offline behaviors so there’s nothing new here.

We often hear that this kind of document aims ait controlling employees, keeping them in check. I don’t subscribe to this point of view. There’s of course a risk that businesses mistake policies for barbed wires and establish a list of “don’ts” or “you can …at your own risks and perils” which effect is devastating. That’s OK if it’s what you’re looking for ( but collateral damages will come later), but it’s a pity if it’s only because of a lack of maturity.

In my opinion (backed by experience) such policies, often completed by training or awareness sessions should be used to build zones of security, of comfort. What’s that ? That’s the fact employees know that nothing bad will happen to them provided they respect the policy and that businesses, reassured by having their employees knowing what’s at stake and what the good practices are, let them leave their lives, trust them and even rely on them. Hence the need to to make the elaboration of the policy a collective event, a conversation between the business and employees.

That said, it’s hard for policies to not abandon their normative and unilateral aspect. They’re often view as something business establish and employees have to respect. That’s, once again, far from the truth.

Businesses want dynamic, responsible and engaged employees / ambassadors. Ideally some will involve themselves much more than others and will go further in socializing their job, what implies discussions, taking stands etc. That’s exactly what Ed Brill tells in Opting In : how the way he uses the web, his postures and behaviors have changed over time in the context of his Product Director job. But there’s an anecdote Ed tells that shows that if you wan the system to work there’s a need for much more than a passive tolerance : an active enforcement of the policy.

What does that mean ?

Ed tells that it happened a couple of times that a blog post or a public stand made some people’s teeth grind, what leads to complaints adressed to IBM’s top management. What did the management do ? They checked that Ed had respected the policy and, since it was the case, told the complaining person that not only they won’t reprimand their employee but they’ll also back him.

That’s what I call an active enforcement. When an employee is called into question while having respected the policy, he must be sure that his employer will full back him, whoever complains.

Without that he won’t engage or only in the most minimal way. Loosing employees as relays comes at a cost. Maybe you’ll think that it supposes a high level of trust. Of course. Hence the need to make the elaboration of the policy a collective and unifying event. Since the guidelines are suitable for anyone there is no way to drop someone who respects the rules that have been collectively established because what he said did not please anyone.

Social media and networks are game changers in the workplace. As they allow a less hierarchical, less formal and more desintermediated form of communication,...
Read more
Books I read

The social employee : foundations of a social business

How to male employees adopt social and digital technologies ? That's one of the first questions any business undertaking a digital turn must answer....
Read more
Books I read

Connected objects, (big) data, social networks. They are today's hot topic even if the general public and even businesses don't really understand what it's...
Read more
Customer relationship

Reconcile data to reconcile with customers

Today there's no company that does not proclaim its customer orientation even if looking at the facts often makes wonder if it really goes...
Read more
Human resources

Should employees be rewarded for using social media ?

That's a major trend : an increasing number of organizations are trying to make as many employees as possible use social media. Reasons are...
Read more
Collaboration

If the matter was largely overlook while enterprise social networks projects were in their infancy, compliance is becoming a major concern for many businesses. What...
Read more