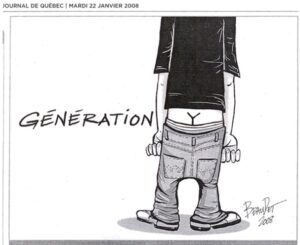 Generation Y, digital natives etc. What haven’t we about the revolution they embody and the vital need to adapt if we didn’t want to lose them or be overwhelmed by the wave. If I’ve always admitted that these generations have their specificities, it seems that too much have been said and done on this topic. Generations come and each one differs from the previous. Each brings a kind of disruption and the history repeats endlessly. If we lack hindsight, we saw hurricane but with hindsight we see a foreseeable and cyclical need to update our businesses and society.

Generation Y does not exist

French digital marketing expert Yann Gourvennec wrote a couple a good pieces on this matter last year. In the first (in french)Â  he explains – backed with sound arguments – that :

– The concept of Generation Y only relies on anecdotes. And statistics, that relies on tangible evidences, show nothing.

– the discussion on generations is a recurring Y and the “Y model” has already been used for many other generations from the 90s. “If digital natives exist today they already existed 20 or 30 years ago” so we can’t restrict to the current generation.
His second post shows that the characteristics of new generations are less caricatural than we often say and comes to the conclusion that “we’re all members of the generation Y”.

A conclusion that meets my own observations..

As a matter of fact, who are, today, the people that have the most marked, convinced and mastered “Y behaviors” ? Who are those who make the best productive and accountable use of social technologies ? For what I see it’s more people between 35 and 50 than people between 20 and 35. What are those that have the most accomplished thinking on social structures, inside and outside of the organization ? Who tried the most – and sometimes managed – to change the system ? The same. Who are the most critical and protesting ones ? Still the same.

What does it mean ?

The acknowledgement of the inadequacy of structures regarding to reality is not new. It’s even permanent and recurring. Baby boomers and Yers were not less critical than those that followed and even managed to change things. Less than they would have wanted to but they did. The same is happening with generation Y, digital natives etc. But it’s much more visible.

Is this visibility due to the new media we have today ? No. For what I see when I deliver classes and for having may Yers around me at work, I think they’re much less protesting that many of those who came before and do not agree with the way we often describe them. But, on the other hand they are much more likely to take responsibility for their convictions and are ready to make their way ouf of the beaten tracks to be coherent with themselves.

A first explanation is that Yers and digital natives are the inhibited version of Xers and boomers. They all acknowledge the same but some decided to fit the mould that guaranteed them a linear career path and progression, a job and some kind of financial safety. Boomers were able to push the logic to its limits and for most Yers the bridge collapsed in the middle of the crossing. Consequently, the following generations understood that they have very little to win if to trade their convictions for an hypothetical professional success. Their career will be much more complicated that their elder’s and it’s easier for them to say that the system is broken and draw all the consequences without putting themselves at risk since the whole society has come to the same conclusions, regardless of generations.

Yers : others say a lot about them while they say very little themselves

The second explanation is to be find at Xers and boomers that threw their convictions away, traded for an – often apparent – safety offered by the system. If some acculturated, others are now back with their banners since the times seem to be more favourable. And many found the way to move the needle without putting themselves at risk : establishing Yers and digital natives as scarecrows and using them as a screen for their own convictions. As a matter of fact, new generations don’t speak and protest much. But others do it in their name.

So are Generation Yers and Digital natives a myth or reality ? What we can say is that their message is not new at all ant that they’re more a rallying banner than anything else. But does it matter ? What matters is this this shared feeling of urgency that’s not common to nearly all generations, the acknowledgement we should change our structures and practices. It does not matter if they’re only a pretext while the cause is right.

Previous articleWhere to start your social and digital transformation ?
Next articleLinks for this week (weekly)