Previous articleBig Data requires a specific culture and data ethics
Next articleIntranet and portails : between centralization and deconcentration
Lire

After Email, What If We Get Rid of Meetings 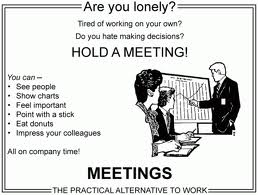 What if, after email, meetings were the next curse businesses will have to deal with ? If we listen to employees and even managers, meetings are always mentioned as one of the most negative side of their work. Useless, time consuming and often painful moments, they are only appreciated by those who organize them.

As a matter of fact, if we want to address productivity issues, time waste and engagement at work, the situation could not look worse :

â€¢meeting some people should attend “for their information” while nothing that will be said directly matters to them and a simple report would be enough to keep them informed.

â€¢ Meetings where so many points are tackled that each participant will have to stay 2 hours while only 20 minutes are related to their concerns.

â€¢ Meetings to prepare meetings that are themselves followed debrief meetings.

Don’t get it wrong. Not all meetings are useless and unproductive. In fact the similarities with email are numeros and that’s for a reason. They share the same problem : the problem is not the concept but how it’s used.

Meetings are not bad, the way they’re organized is

What are the causes of “bad” meetings

â€¢ Lack of visibility and “open work“. The famous “meeting to share updates” where everyone tells what he did the previous week. Not because that’s useless but because it causes too many and lengthy meetings. A meeting should be used to solve problems and make decisions, not to share problems and have to schedule another meeting to fix them. Anyway the only fact we sometimes use the “work meeting” word is meaningful : if we had to say that a meeting will be a work session that means that there are meetings where no work is done.

â€¢ Lack of clear agenda. That’s often a consequence of the previous point : the meeting where people share their updates becomes systematic and people come without knowing what it will be specifically about. It may be due to lack of organization or…

â€¢…or a misuse of meetings, a kind of meeting hijacking : the goal of the meeting is not to be productive but to gather people and strengthen team spirit, the meeting being a pretext. In the end the result is often the exact opposite of what was expected.

â€¢ lack of good manners : time slots are chosen in defiance of attendees’ constraints, meetings are set to show “who’s the boss” and who owns other’s agendas.

The comparison with email is astonishing : emails with too many people in cc, sent at any time with, poorly written, even aggressive, turned into a collaboration and reporting tool etc. And as we often say that one’s inbox is the to-do list of others and that email is often the best way to become in charge of other people’s problems without having enough time left to tackle one’s, the problem with meetings often comes from the gap between the needs and wills of their hosts and the needs and constraints of attendees.

The response is not only technological. The best communication, remote meeting, collaboration or social networking solutions won’t fix bad habits but can enable new ones provided they’re desired. No one will switch from a reporting culture to an open work one without effort. And in the same way businesses establish social networking policies – and should even start with email policies – they should contemplate establishing meeting policies.

That’s a concern which importance is growing as the physical workplace is disappearing to the profit of a digital workplace, what supposes new behaviors and rules.

If you want to read more on this matter, have a look at Luis Suarez’ post. The man who said no to email is actually considering the need of doing the same wit meetings.

Employee experience has a very operational component in the daily work that concerns the content of the work and the way it...
Read more
Management

How leaders bought themselves time (and why it failed)

Time is always a scarce commodity in a company and even more so for leaders and managers. The phenomenon has of course...
Read more
Management

Monitoring the productivity of employees has always been a concern for companies and managers, and the transition experienced (or rather sudden) to...
Read more
Employee Experience

Very often I hear that the purpose of the employee experience is to take care of…employees. Well if that's partly true it's...
Read more
Human resources

For several years a growing number of companies have been using intrapreneurship as a tool for motivation and commitment.
Read more
Management

Real “digital working” may not be far away. And not as cool as expected