A Digital Department must plan its obsolescence 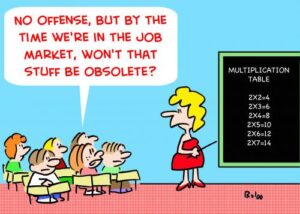 While more and more businesses are equipping themselves with a digital department, some are already questioning how useful they’ll be in the future. Build to be a digital transition catalyst, such departments can either fulfill their mission or be totally counter-productive.

Explaining one more time how it’s important for any business to get digital important is pointless, as well as repeating one more time that digitization is much more than spreading tools and having them adopted. It’s also a new philosophy of work and operations that must soak the entire organization.

Adopting a tool is adopting a management philosophy

That said there’s a risk no one should forget : “digital” can mean both everything and nothing and will become so ubiquitous that having a single direction in charge of it is the best way to make it a goal and not a means, a power and political challenge and even to lock it into a closed box while pleasing its promoters. Last pitfall but not the least, any direction or department has the naturel reflex of organizing its own survival in order its raison d’Ãªtre will never cease to exist. NaturalÂ  and logical.

But there’s a digital urgency, if not a digital emergency. A level of culture and literacy to spread so it will soak operations and decisions. Not something people do but the way they do it.

A company I was recently talking with told me : “we consider ourselves as a task force. We look like a department from the outside but we’re doomed to disappear and get back to our previous jobs and departments. To some extent our success will be measured by the time we needed to become useless”. They are the necessary spark in a company where the cultural gap is quite large at the start but the combustion should become as natural and self-sustaining without having to need support in the future.

So yes, digital departments are necessary in many cases. But their long-term institutionalization may lead to setting wrong goals.