Previous articleLinks for this week (weekly)
Next articleBig Data: A Revolution That Will Transform How We Live, Work, and Think
Lire

Social in the workplace : forget adoption

Adoption.The word comes again and again when it comes to implenting an enterprise social network or any technology supporting new ways of working. But when the assessment time comes, one must be very ill faith not to see adoption poorly works and that new models have to be found.

Change Agents Worldwide, a community of seasoned practitioners, recently issued a sound and serious white paper on the matter.

1st acknowledgement : usual adoption strategies mainly relying on awareness and communication do not work. That’s not a surprise but stating it is a good point. Personally, I’ve been used to calling them exhortation strategies instead of adoption because they rely at best on seduction and at worse on supplication rather than alignment. If seduction matters one should not expect to transform a business, its culture and work practices by relying exclusively on it nor begging employees to have pity and decide to use a tool for which lot of money has been spent.

Adaptation, as the word suggests, is employee adaptation to a new context. Facing an urgency, aware of how critical change is, employees will adapt and adopt new practices.

Exaptation is more like serendipity. It’s a shift in the function of a trait during evolutions. Put in a simple fashion it means letting employees find new ways of working that were not expected from the start, using functionalities for something they were not designed for. 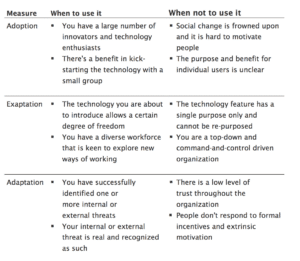 Each one works better for a specific typology of users.

No surprise here : there are adventurers and people who need sense and a rational analysis. And experience tells the latter matters a lot : a tool that’s not used by everybody is not a reliable place to get work done and when even only one person misses, collaboration fais. I can see a shift happening in some businesses : arguments based on changes in business models that can help anyone understanding that their company is at risk and can experience the same fate as former leaders that collapsed within a couple of years and that help to make sense of change instead of trying to be up-to-date, use new tools because they exist or please users.

A last point beofre I finish. One again it’s about making employees supporting the full weight of change alone. Once for all : we need something else. Of course we need employees to be deeply involved and engaged, co-construction and advocacy matters but are not everything. From the very beginning the corporate message has been “change your work practices but we won’t change a thing in the organizational structure”. It makes no sense. I’ll mention one more time the missed Goldratt : ” dont expect an application to work in an context in which its assumptions are not valid”. It’s obvious that none of the assumptions that come with social technologies and are as many prerequisite to their utilization are present in today’s work context.

That’s rather the way I understand adaptation. People won’t adapt while they’re a player in a complex system, are impacted by a system that does not change. The entire organization has to change as a system and not only adopt social technologies. Some businesses are trying to embrace the matter globally while a lot are still in denial and add social technologies in a context (culture, management, HR, processes) that is social-adverse, hostile, thinking that tool adoption will transform the context without havingÂ  tu put their hands in the dirt. Failure guaranteed.

It's been a long time since we've had a major announcement in the small world of the Digital Workplace, and here we...
Read more
Employee Experience

An organization that is inconsistent with the way we work. Irritant #6 of the employee experience

When you want to know who does what in a company, there is a very simple way: look at its organization chart....
Read more
Digital Transformation

Which company does not nowadays claim that customer orientation is its main concern? I wonder what they were thinking before. What we see, in reality,...
Read more
Management

In these times when under pressure from customers, competitors, technological innovation and even employees, the businesses must reinvent themselves, it is tempting to look...
Read more