Social Business and Enterprise 2.0 in 2013 : the sense deadlock

December is usually the time of predictions. Not the best word for what is often prophecies we hope to be self self-fulfilling but that’s the way it is. But before I share my dreams and expectations for 2014, I think a quick reality-check is needed, based on my observations but also on comments and feedbacks I got from the trenches.

I’ll start with this slide from this excellent presentation by Emmanuele Quintarelli. 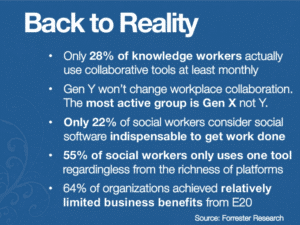 Despite some remarkable exceptions that show that things are not that bad, I think this won’t surprise anyone. An admission of failure that can be see from many perspectives ; adoption, impact, beliefs and vagueness.

Beliefs first. Just to mention the most obvious that have been deluring businesses in their change programs.

First one : social technologies are desired by employees. That’s wrong to a large extent. What they want is to get work done in a more efficient and simple may, what is wrongly mistaken with “they want the same tools they have a home”. But these tools only make sense in a context of the work and interaction models they allow are desired and acceptable in the workplace, what is seldom the case. Their actual demand is a new way to get things done, which consequence may be new applications. But until the way work gets done changes, new tools make no sense. At best they bring a less user-hostile experience and interface. But for what uses ?

Next : new generations drive change and adoption. They may be accelerators, levers, but not drivers. If you want to find drivers, go and meet the Xers.

ThenÂ  : the future of anything is communities. A problem = a community. That’s wrong. That’s only a part of the scope. Interactions can be 1 to self (Yes it’s possible), A to one, One to many, many to many, emergent (let things happen), managed (people get organized around a goal), participation can be voluntary o mandatory. To look modern, any kind of group is no called a community. That’s a wording mistake that has dramatic consequences : one does not manage a team and a community in the same way, even if the same tool is used. It lead to have community managers asked to do manager’s jobs without any legitimacy, trying to catch employee’s attention with content instead on working on the sense of participation in a business context. Employees see a job to do, businesses see communities to host/emcee/lead and the reconciliation between both needs much more than community management and content-based attention phishing.

Last : technology will make people change. Businesses have been thinking (are many still do) that the fact technology allows something will turn this something into an actual shared practice without having to make it possible, acceptable and desired. In brief, without having to deal with sensible matters. Thinking so and acting accordingly opened the Pandora’s box : all the matters that have been hidden under the carpet for ages surfaced when the time came to explain with social business initiatives or social networks implementations did not succeed as expected.

Sense off the face of the earth

There’s a lot of talks on adoption but nothing on sense. That’s a huge mistake since we all know that change must be sense-driven. Why is one doing something ? Why should one do something ? Is it tolerable or acceptable in a given context to adopt such practices or behaviors ?

The answer should never be “I must change to use a new technology” or “I need to change to collaborate, to share”. The first means that the effort aims at justifying the money spent in the latest craze, the second means nothing outside of a sensemaking context that makes the result of change desirable and acceptable at work. Exhorting people to share and collaborate means nothing until people are shown what behaviors and concrete actions are expected and those behaviors made acceptable at work.

There are many way to have a sense-driven approach but it often happens this way.

First, awareness happens at the highest level of the company. Not that the company has to get digital or that people should collaborate more or better : it leads to nowhere. It’s about the awareness the the value creation model is changing, that it’s about short term value, mid-term competitiveness and long-term survival. This awareness should be spread, explained, to be shared by all employees.

Once shared, awareness allows to go the second step : draw the consequences. People need to organize, manage and work in a new way. This message works when it comes with concrete cases that are specific to the company and if everyone understands what’s at stake.

Drawing the consequences does not only mean saying people they must change and show them what they should do then. It’s also about creating the context that makes change possible. If change harms result measurement because the focus is put on something new, if managers are not supported, if the way delegation and decision is made is not compatible, if processes… (the list is long) it won’t work.

Once the sense is clear, once everyone understands what’s at stake, that the context is favorable that new behaviors are seen as necessary, are acceptable and even desired, it’s time to deal with technology adoption. But not before.

Lack of adoption is not a problem

So, after the lack of sense, the other problem is poor adoption. But, in fact, it’s not a problem. The importance given to technology adoption is in inverse proportion with the work made on change. When a way to manage and work is logical, desired, obvious, technology becomes desired because it makes sense and helps to do what has to be done in the way it has to be done.

To some extent, the lack of adoption is not the cause of poor adoption programs but of lack of sense that make these programs useless.

We got it wrong : it’s not an employee matter but a business one

For lack of sense-based approaches and drawing all the consequences, employees have become the only target of change programs. They had to carry the weight of change regardless to the existence of a sensemaking context, sometimes even against the context.

In such a situation and without any “higher purpose” that engages everyone and drives sense, projects have slipped and the result was that technology was accompanied, not employees. Accompanying technology to hav it used in a context where its assumptions are not valid while it should have been about business transformation. But since everyone was convinced that using tools will transform organizations without having to put one’s hands in the dirt, or did not even see the interest of transformation, that’s where we headed.

For lack of a systemic approch, for lack of business adaptation, businesses are trying to adapt employees to today’s economic context without adapting the organization that is the interface between employees and the external context. Doomed to fail.

Another point that’s often overlooked : by neglecting the organization and focusing on people and treating employees as common users and not managers, managers can’t embrace change as managers. How could we expect work practices to change without involving managers and empowering them to be proactive and change themselves the way they organize work, communication, reporting etc. with their staff ? Note to those who still don’t get it : teams won’t self-organize despite of or even against managers. What limits use cases to discussions without assigned goals above the flow of work (communities of practices) and prevent any “getting things done”, vertical business case to happen. Bad news for whom is looking for tangible and measurable benefits.

A vague concept and futile conversations

Hence the many (and often justified) feebacks we hear

â€¢ the concept is vague : between the use of technonly, organizational transformation, learning organization approaches, community management…no one know what it’s really about anymore.

â€¢ we’re going into round circles and there’s nothing more to say and learn onÂ  the matter : of course, since we’ve reached a deadlock that forces us to rethink the approach. Until minds shifts, there won’t be anything else than nice conversations between believers.

â€¢ use cases are hard to get : the very notion of use case shows to what extent the focus has been but on technology and not the context in which work is done. The only thing businesses cared about what the technology that was used at work, not work. Technology was changed, not work and, as Goldratt wrote “we should expect an application to work in an environment for which its assumptions are not valid” it’s not hard to understand why few organizations meet success. These assumptions are not the fortunate consequence of the use of technology, they are prerequisites.

The good news is that despite of this situations, positive things also happen. There are businesses that “get it” et “made it work”. Businesses that leave people in peace and focus on context. That’s how my “Perspectives for 2014” will be about. See you next week.

Once you have become aware of what employees really do at work and have identified all the factors that generate frustration, pain...
Read more
Digital Transformation

Which company does not nowadays claim that customer orientation is its main concern? I wonder what they were thinking before. What we see, in reality,...
Read more

Improving a team’ s work: a story of continuous improvement