We need a new representation of reality

The need for new enterprise and management models is a shared acknowledgement but what remains a major issue is the time needed by leaders, managers and employees to act accordingly and their ability (or rather lack of) to move in this new paradigm. An acknowledgement that is – according to what I often hear – seldom the result of a slow maturation but of a sudden slap.

This suddenness has nothing surprising : the acknowledgement is not only the result of long observations but a paradigm shift. If one sees things with the same eyes, it can take years before he sees anything new but if he adopts a new perspective, if he makes a step aside, then he’s submerged by a new reality.

If information was visible, any manager walking through an open space would.

Recently, someone made me notice that what was surprising with digital transition and new work models is that we were struggling to fix things the old manufacturing industry, that’s considered as the embodiment of backward-looking models, fixed decades ago. It’s all about flows, stocks and bottlenecks. The only difference that we have to deal with intangible flows.

When one walk into a factory, he sees idle machines and workers, others with impressive stocks of work in progress, too few raw material and too many unsold or unshipped finished goods, scraps that are synonyms of poor quality. When the model dysfunctions anyone can realize there’s something wrong just by having a look and walking around (even if finding the root cause may be a tough job).

Now imagine that anything intangible and digital in the workplace becomes tangible and visible. That we could see the stock of emails or tasks to complete on each desk, problems needing someone to fix them, that the guy that’s been looking idle for a couple of years is only waiting for his manager to validate something or is trying to fix a problem alone without being able to get any help. 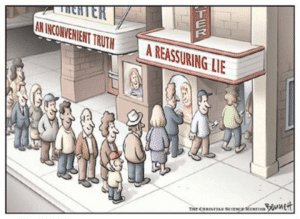 If we could make intangible tangible, anyone with a very little common sense would faint when walking through an open space and say “Oh my ! It’s not possible, all the processes are wrong, we’re all dysfunctioning”. But we can’t. So we guess, we think that… and say “it does not matter, it’s not that important” until things become obvious and visible.

There’s not bigger danger that the ones we don’t see, no worse situation than those we have to handle blind.

We perceive things through indicators that give us a wrong view of reality.

We shaped tools to help us assess an intangible reality. These tools are our eyes in a abstract, intangible and complex reality. They are complemented bu the intuitions wa have about what things are, what they should be, a little bit like we use the memory of a room seen by day to move into it by night in the dark. These tool did not become wrong or irrelevant overnight, they are, in fact, still telling us what things are, what reality is. But the reality they show is now a very little part of the global reality businesses need to move in, or sometimes the image of reality as it was years a decades ago, like the starts we still see shining in the shy while they died thousands years ago. What leads us to manage a whole based on a vague perception of 10% of it.

We’re only realizing that financial indicators don’t account for what economy actually is and lead to dangerous misunderstandings and wrong decisions. A part of our business and operation indicators are not better. As for the way we perceive the way things work, it’s still improvable since we don’t understand the way value si created now.

Because we can’t perceive reality visually, we need prosthesis. The one we’ve been using until now are outdated and make us bang into walls while keeping us sure that it’s the only solution at the same time.

When context and priorities change, the smartest companies change the way they represent and visualize reality, build new frames of referencee.

We look at where there’s light, not where we should.

Maybe you know the following story.

A man is searching something in the light of a street lamp. People passsing by stop and ask him what he’s doing and he says “I’m looking for my keys”. They decide to help him and spend a long time searching but no ones finds anything. Then one asks : “Are you sure you lost your keys here ?”. The guy answers : “I’m sure I didn’t, they’re elsewhere. But this is the only place where there’s light to search”.

Previous articleThe limits of social collaboration : a matter of “pull”
Next articleLinks for this week (weekly)

Remote work: a mirror of the organizations’ weaknesses.

To take care of their mental health, employees prefer robots to their managers

Can Agile and HR cohabit?