A study made by Deloitte and sponsored by Google drew attention by the end of 2013. It showed, among other things, that only 11% of french employees were using social collaboration solutions while cloud based document creation was used by 53%.

Such numbers caused lots of reactions that led to the usual discussions on pointless the concept was, the irrelevance of the french management model, the lack of a sharing culture etc. I do not agree. I’m even likely to say that 11% is not bad at all.

First let’s have a look at adoption rates by tool and country. 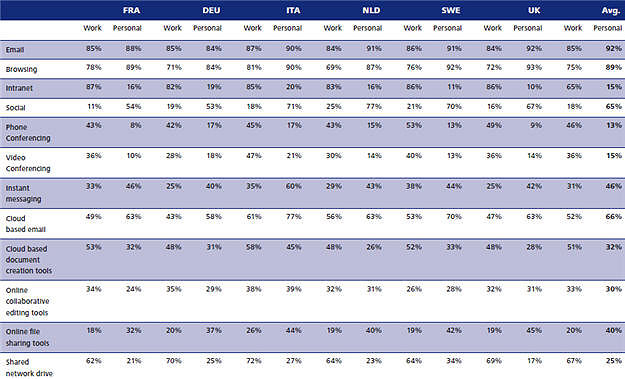 So the adoption rate of social in France is said to be 11%. To be compared with the european champions who are the Netherlands (25%), with the 19% of german employees or the 16% of english employees. So, of course, France is lagging, but what’s the matter exactly ? A few percents, talking of a technlogy that is supposed to revolutionize the workplace ? At this point, even the UK’s 25% is not acceptable and, if we can spend long hours trying to explain the differences between countries, we must ackowledgeÂ  the facts : this discussion would be about details, facing alarming numbers.

That said, and without have conducted such a deep study, I often mention 10% as a logical average number. What makes me say that these 11% are quite a good surprise. Why ?

1Â°) If lots of businesses are experimenting social collaboration, there are are still few global implementations. 11% may not be bad is the maximum target is 33% and has a different meaning is technology is available to everyone.

2Â°) Let’s put ourselves at the place of the average user. Email ? I know what it is. File sharing tools ? Too. Instant Messaging ? Of course. Social ? So-What ? Can you repeat ? I bet that even when they use such technologies, 3/4 of employees don’t know what social means and that they are actually using it. Moreover, social is sometimes so integrated into intranets that they don’t see the difference (what is the case for most advanced companies). It can even be embedded into line of business tools.

3Â°) I don’t want to repeat the same story again and again but we’re reached the plateau of what’s possible with current approaches to social collaboration. Isolated from business activities and processes, layer added over the existing “real” work, more focused on communities than on execution, it only attracts those who are convinced by sharing approaches, who want to teach by the example and are ready to do so despite all. Even despite of their peers and managers judgement, on their personal time, in a poorly relevant context, regardless to the sense of the approach. If we consider participation rates on the web, 10% of actual contributors seems to be the maximum we can expect since the approach stays the same. Something we can wonder is to what extent differences in adoption rates relates to countries where community driven approaches based on voluntary participation prevail vs those where line of business approaches prevail. In regard to these point, the Pierre Audoin Consultants study was full of valuable insights.

So there may be a French specificity. Maybe HR are more over-cautious here. Maybe we lack a culture of sharing. But that’s certainly not all.

It's been a long time since we've had a major announcement in the small world of the Digital Workplace, and here we...
Read more
Recommended Bookmarks

Why HR and managers should have watched Bayern Vs PSG

It was a lean summer for sports enthusiasts but at least the Champions League was able to come to an end. Even...
Read more
Collaboration

Corporate silos are the enemies of collaboration, knowledge transfer, problem solving and innovation, contribute to its complication and undermine engagement and sense...
Read more
Collaboration

So what? More or less productive in remote work?

This was one of the great objections of those who, rightly or wrongly, did not want to hear about remote work: it...
Read more
Collaboration

While it has been two months since companies have been immersed in forced remote work, they are beginning to learn the lessons....
Read more
Customer relationship

Omnicanality is the enterprise's new Holy Grail. Firstly because it is the logical evolution of e-commerce that we have known for a...
Read more