Holacracy at Zappos : no boss or hierarchy. Really

It was the big announcement of the end of 2013 in terms of management innovation. Zappos announced they were going to adopt a management model called Holacracy. It’s an enterprise transformation aiming at making the organization more responsive, adaptable, efficient by focusing on the work to be done rather than positions and job descriptions.

The organization will be made ofÂ  “circles” based on critical activities, each employees being a member of many circles depending on his skills. No more job title. No more managers as we know them : circles will be led by mentors that won’t have any direct hierarchical power on employees but will assign them to missions without telling them how to do things. No more hierarchy too.

Accountability and focus on the work to be done

This shift of power towards the periphery aims at focusing on the key missions, the work to be done and bring power as close as possible to the field to make employees more accountable in an intrapreneurship approach. The Graal many businesses have been looking for for ages.

If many organizations have already adopted the”Holacracy” model, a mix of agility and lean management, Zappos is the largest of them (1500 employees). 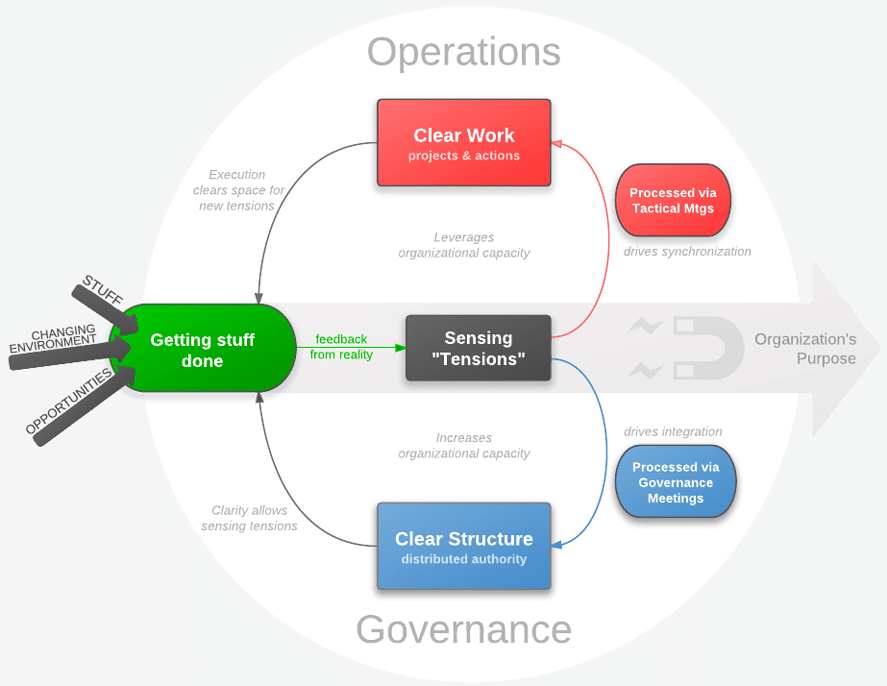 So, is Zappos a model of business without management or hierarchy ? It all depends on the perspective we adopt.

As I’ve already said, an enterprise without managers is not an enterprise without management. Power and accountability still exists but have moved from then center to the periphery, to the field, where action takes place. And if employees can choose the way they do things they don’t choose what they do : the leader/mentor are in charge of resource allocation. If the model allows employees to position themselves on the activities they prefer in an intrapreneur approach, they need to “sell themselves”, develop their branding as professionals to be recognized and get the assignments they want. It’s a system based on results and personal brand, the balance being a guarantee between arbitrary decisions and political games.

Results matter a lot in such systems. Evaluation is not absent from holacracy but works in the reverse way. Here, people get “noticed” when they areÂ  not staffed enough (what shows leaders don’t find you good enough) or when the employees in charge of monitoring the corporate culture find someone does not fit in.

Managers and hierarchy don’t disappear but work in new ways

What makes me wonder about a couple of things.

First, power games. By distributing responsibilities, Zappos want to get rid of hierarchical and political games in the workplace. But will it work ? On this point I agree with Bob Sutton :

Zappos gets rid of traditional bosses not hierarchy and status differences http://t.co/jhwZercOUj

“show meÂ any group of five human beings or five apes or five dogs, and I want to see the one where a status difference does not emerge. Itâ€™s who we are as creatures.â€

While Sutton says that the instinct to remove as much friction and internal competition is the right idea, â€œcreating situations where youâ€™re clear who has decision authority is important.â€ Without that, he says, â€œyou get more politics.â€

Hierarachy and statuses are not removed but work in different ways. And, as Sutton says, if things are not stated clearly politics will be reinforced.

What Zappos seems to be trying to do is replace conferred attributes with deserved ones and separate execution from personal development, employees being the only responsible for the second in a system focused on the work to be done.

What leads to another question (to which I have really not a single piece of answer) : will the move from a fixed and explicit authority model to a moving and implicit one be perceived differently by employees ?Â  I’m likely to think so because employees will contribute to confer authority. But we can also fear that for some of them authority will still be authority, no matter the system, and the politics that come with won’t end.

Second point, which is very important to me, is the role of social technologies in supporting this kind of organization. On the Holacracy website I can read “purposeful organization through social technology”.If I dig a little further I find things about glassfrog, a solution designed to support activities as they are organized in an Holacracy. A solution that does not seem to have anything in common with enterprise social networks as we’re used to see them but that’s supposed to fit perfectly in an holacracy. Evidence that such tools can follow the structure of work. And the solution is shown as the companion of the approach, what means two things. The first is that the software use uselesss without the approach. The second is that the software is optional : it helps but is not critical. What’s critical is the organization. The contrary of many enterprise 2.0 or social business approaches that have similar goals but rely on the illustion that technology adoption will be enough to transform the organization.

Recruiting one’ s clone: reassuring at the beginning, penalizing in the long term