Employement : a (lost ?) war against the machine ? 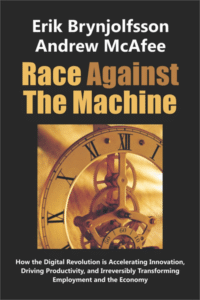 Does the digital revolution create or destroy jobs ? If we consider the digital industry and how it grows in value there’s no doubts it creates jobs. On the other hand, if look at the destroyed jobs in the “old economy” the balance is everything but positive. And the prospects are not promising. That makes many people wonder if, in terms of employment, the race against the machine is not a losing battle.

That’s the matter Andrew McAfee and Erik Brynjolfsson dealt with in Race Against the Machine: How the Digital Revolution is Accelerating Innovation, Driving Productivity, and Irreversibly Transforming Employment and the Economy

. As paradoxical as it seems, they felt they had to explore the question of employment while they were working of what they call the “Digital Frontier” and the impressive potential that comes with. As a matter of fact they considered that employment was notÂ  handled properly by the classical vision of economy.

The starting point is simple : even in a recovery phase, the US economy creates very few jobs. Not enough to balance those that have been destroyed by the crisis. According to economist, at this pace we’ll have to wait until 2013 to recover all the jobs that have been lost during the crisis.

Three theories try to explain the weakness of job creation :

We innovate too fast compared to our adaptation capabilities

1Â°) A classical theory of demand that says that a weak growths causes a weak demand which is not sufficient to create enough jobs.

2Â°) Another theory emphasises a stagnating innovation The US economy does not innovates enough and does not improve its productivity. If “stagnationists” don’t ignore the impact of the crises, they don’t believe it’s the main cause of the current situation. According to them the real cause is the lack of innovation.

3Â°) On the contrary, a third theory claims that we’re innovating too much and too fast and that both the economy and businesses can’t adapt to make the most of innovation. That’s the argument of “the end of work”, based on Rifkin‘s work, that claims that technological progress will lead to needing fewer and fewer workers to produce the goods and services the population needs.

This third theory has never been taken too seriously by economists who never believed that technology could disrupt the job market in a deep and lasting way.Â  McAfee and Brynjolfsson want to bring this approach back into the debate and explore how technology impacts skills, salaries and employment.

From my own perspective, two points discussed in the book appear to be essential.

First, machines become every day more capable to work in fields we thought being reserved for humans. Today 47% of jobs are at risk due to “computarization”. We talk about “cognitive” jobs, hold by knowledge workers. and even if it’s been proven that that best chess player is neither a human nor a computer but an human interacting with computers, many people are wondering how long it will take before Watson, the new cognitive computing machine by IBM that is able to learn by interacting with doctors today, is able to teach them lessons.

We need new structures to make the most of technology

Then, and that’s my major take from the book, if technological progress is destroying more jobs than it’s creating, that’s because we’re unable to make the most of it for many reasons. First, organizational models that does not fit today’s economy and work (both at the level of businesses and nations), then lack of skills.

McAfee and Brynjolfsson end by a list of recommendations to implement as fast as possible to win the employment race against the machine, in the field of learning, entrepreneurship, investment, regulations, tax.

A reflection that reminds me of the one I had on how organizations adopt social technologies, the need for a systemic approach and, more globally, the knowledge economy that does not exist as a real andÂ  organized system. It’s not possible to deal with all these issues with tactical actions only but with a systemic approach at the level of nations, businesses and people.

In the end McAfee and Brynjolfsson are optimistic about the contribution of technology to growth, our well being and our future successes but at one condition. After having created a society and models that helped technology to grow up and improve over time, we adapt them so they’ll make the most of technology.