What is cognitive computing ? IBM Watson as an example 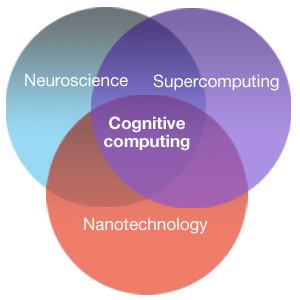 There are lots of talks about big data, analytics, cognitive computing but what it means is still unclear for most of people. Hence a lot of confusion and a tendency to mix everything together to, in the end, not get what it’s really about and what it can be used for.

A couple of weeks ago I’ve been invited to breakfast on cognitive computing by IBM, with a focus on IBM Watson. It’s a good occasion to make things clearer and set the foundations of a better understanding for anyone.

First thing before we start : what is cognitive computing ?

This is the definition we were given.

Cognitive systems are complex information processing ones, capable of acquiring information, putting it into action and transmitting knowledge.

Cognitive science brings together things like perception, intelligence, calculation, reasoning and, in the end, conscience.

They articulate many disciplines of science and technology : linguistics, anthropology, psychology, neurosciences, philosophy and artificial intelligence.

Cognitive computing is the 3rd era of computing

In a little more than a century we went from numbers to data then from data to knowledge. It’s not about having one replacing the other but enriching it. Programmable systems allowed to create data by processing numbers, cognitive computing allow to make sense of data. Sense is what stand between raw data and actionable data.

In a simplistic way : tabulation was about adding objects (items in an inventory), programming was about taking color and matter into account, cognitive systems about predicting the weather and telling what to wear.

We’ve been saying for long that machines were good at doing what humans were bad at. Today we’re on our way to use machines to do what humans are good at.

Cognitive computing is also a revolution in thinking models and our relationship with computing. Until now, computers used to give absolute answers, tomorrow they won’t say “right” or “wrong” anymore but “probably”. Cognitive systems suggest answers they refine based on their interactions with end users. They don’t the “the” answer (because it does not exist) but the most acceptable one, the one that is more likely to work in a given context.

From stealing attention to understanding intention

From a more practical standpoint, applied to customer relationship, here’s how the change materializes. Before, we used to get an answer (a product) a business tried to push to us, sometimes by trying to identify the customers that were the best “target”. Tomorrow, the system will try to understand our need and build a response. In terms of marketing it’s about moving from attention marketing (trying to grab people’s attention to sell them something) to intention marketing (trying to understand the intention to come with a custom-made solution).

It raises a question : are computers able to understand humans, learn from them and come with an answer that is not formally written in a database ? Have a look at what IBM Watson, the first cognitive system ever, did at “Jeopardy”.

Unlike the system we know, designed to give us an information that was previously stored in their memory provided it was put at the right place and the question asked was exactly the one that was expected, Watson has its own way. No information was “put into” but a large amount of unstructured information was made accessible to it. There is no field containing “Henry IV horse” and “white” but lots of texts, blog posts, wiki entries etc. If a text says that that Henry IV was the king of Navarre and another that the Kind of Navarre had a white horse, then Watson can says that Henri IV had a white horse.

A cognitive system works this way. 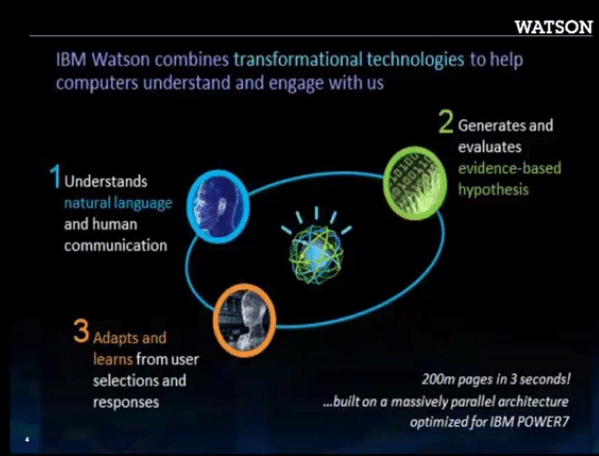 3Â°) adapts and learns from user selections and responses

If Watson’s appearance at Jeopardy was a launch event in the context of IBM’s 100th anniversary, Watson improved and can now be used to solve real-life problems.

A man with a machine will always beat a machine

The most famous use case at this time is in Healthcare with the Memorial Sloan-Kettering Cancer Center (MSKCC) where Watson helps doctors to find the right treatment regarding to a given patient’s constraints. We can see on this screenshot the different confidence levels for each treatment and its acceptability by the patient. 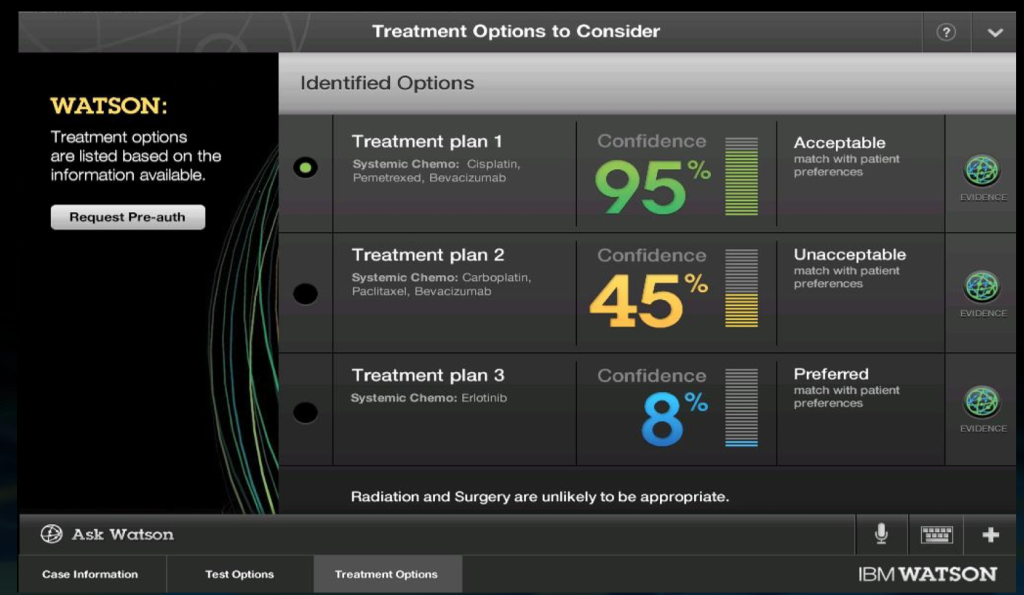 Each interaction with doctors makes Watson more knowledgeable, more relevant. But, at this point, we must avoid the common traps : Watson isn’t and will never be a doctor. It’s an assistant. As said and illustrated in this previous post, if the machine can beat humans, the human+machine couple will always beat any machine. That’s Watson’s approach : interact and develop synergies with humans to be better together than human or machine alone. This TED keynote explains it very well.

A lot of new use cases are being implemented. For example, a customer relationship case for a bank that could end in such chats between Watson and the client :

– what should I do with my savings ?

– you should apply for a home-buyer saving plan.

– what is that ? What’s the difference with my home saving account ?

– how much should I save every months ?

– considering your incomes I would suggest that…

– so do you want me to start one for you and set up an automatic transfer ?

And if the conversation starts on the client’s mobile phone and is interrupted, Watson will be able get in touch later in the evening on another device and continue the conversation from the point where it stopped.

In the travel industry, instead to searching “flight Paris Kuala Lumpur” people will key “I wan to see what matters in Malaysia” and the response will include everything : airport transfers, flights, hotels, excursions etc. That what intention is all about.

As we can see – and sometimes worry about – a lot of jobs are at risk with such systems becoming mainstream. But we should not overlook the new jobs that will emerge. Watson can’t work without a cognitive background. Without knowledgeable humans to train him, tell him about what’s peculiar to a job, an industry, lead him in an iterative process to make him more relevant, Watson is only a machine. An empty one.

In short, once this new kind of system is mature, our relationship with computing will have dramatically changed. We won’t use computers anymore but interact was assistants that will provide us with actionable operational answers instead of data. Jobs and industries will have been disrupted, new business models created. Waiting for this, by feeding the social web and enterprise systems with structured and unstructured data, we’re creating the fuel Watson and its likes will use one day.

To go back to my introduction paragraph and the need to make concepts clearer :

– big data is nothing but the capability of processing a large volume of data. That’s the engine of lots of applications but it’s not a revolution : we’ve always tried to process as “big” data as possible, according to the available technology. It’s and should be a black box for lines of business and end users.

– analytics means using this capability to understand how things correlate and predict what’s going to happen. It’s like business intelligence.