Who is really benefitting from employee engagement ?

Engagement is now seen as an essential factor of sustainable success. As a matter of fact in a connected world businesses need the active contribution of everyone to be successful. In a world of fierce competition everyone needs to do more than expected to beat competitors.

So the benefits of engaged employees are obvious, even more when we consider that disengagement has the exact opposite effects and has a negative impact on all the factors mentioned above. Engagement is not neutral : it’s positive or negative and doing nothing to improve it is not overlooking a major lever but letting things worsen with the knowledge of what’s happening. 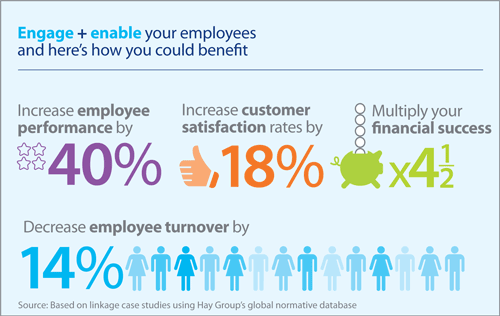 So having a high employee engagement is the best of both world. Highly committed employees who make a business successful what is good for them in return. And everyone is happy in the end.

In fact that’s not always true. First because any study shows that about only 20% of employees are engaged. What means that 80% aren’t or are even actively disengaged, playing against their own company. So today the fully engaged company is more a concept than anything else. Then because engagement is not satisfaction, happiness or well-being at work.

Engagement is not satisfaction or well being

It would be an easy shortcut but no : an engaged employee is not an happy employee. Are we happy because we’re engaged ? We have nothing to back such an assumption. It may be true on a short term but on long term vision employees need to see the impact of their engagement, what the company makes of it, how it is recognized, valued and used. Of not, employees are like lovers who don’t get even a look from the loved ones : they become frustrated and start to hate the one they used to love. This year, I had the opportunity to see “Brasseries Kronenbourg” (A Carlsberg Company) talking about the engagement survey they made with Kenexa. One point caught my attention : while many simply measure how engaged employee are, they made the link between engagement and performance. Do employees feel their engagement is useful, not wasted. If not, the most engaged employee may become the most disappointed one because his good will, his attachment, his willingness had no impact and was even unnoticed. Are we engaged because we are happy ? That’s more likely even if the relationship between happiness and engagement is a virtuous circle, one improving the other.

What leads to a warning I’ve made in previous posts on that matter. If everyone agrees on what an engaged employee is (see the illustration on the right) there are two ways to act based on it. For some, businesses have to create the conditions for engagement, for others it’s up to employees to get engaged and find their own levers. “Find a way to love us, understand us and motivate yourself…for our part we’re not going to change a thing. If you don’t get engaged it’s your problem and you’ll face the consequences”. Engagement is seen as the employee’s problem while it’s the company’s one for a large part. With all the drifts we can imagine, most of all in terms of work/life balance. Today we see employees being fingered at and subject to criticism because of a so-called disengagement because they don’t answer emails while on vacations or week-end.

This real example I was recently told about reminded me of this strip :

Engagement : the new word for exploitation 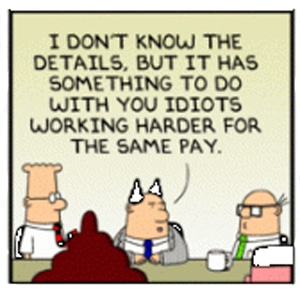 Engagement is necessary and good for both employees and companies provided it’s a joint, two ways effort where each one is engaged towards the other, gives and receives. If not it’s going to be one more wolly HR concept used to dress a less appealing truth. Taken seriously by some and abused bu others, it starting to make people smile in organizations or conferences when it’s mentioned. As a matter of fact if in some cases it’s a lever of performance and developement, in others it’s a gift without compensation in return, under the cover of angelism and good conscience, a deal of fools that allows to :

– ask them more for less

So yes : you’re going to hear about engagement for a long long time because it’s a key factor for the evolution of businesses. But before it becomes a management matter it’s a matter of ethics first. By what end will businesses take it ? Like a fair and balanced deal or like window-dressing.

What anyone should remember about engagement is that everyone should benefit from it. The enterprise in terms of investment and return on investment, the employee in terms of recognition (which can take many forms and not only nice feelings…). Business need to become engaging first, then people will engage and, after, get something in return. If not, well get the exact opposite effect : a violent disengagement and the feeling of having got ripped off.

When engagement is paid in return it’s called well being and that’s a sustainable performance lever. When it’s one way and benefits only to the enterprise, it’s a short term vision that will backfire. Not the first time similar thing happens.

Let’s see in one year where we stand in terms of engagement. Let’s hope it’s going to be used to really improve things, what would be much better than becoming famous in bullshit bingo cards.