Being a 100% B2B vendor at the age of IT consumerization 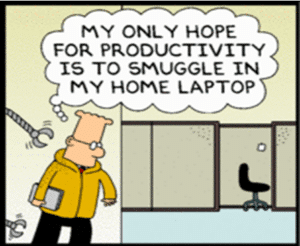 This well-known phenomenon is called consumerization of IT. It relies on the employee’s need to align the performance and experience they have at work with what they experience in their personal lives. It started with office tools, then the devices and as starting to move to more specific business applications.

If you’re a company you already noticed that and it’s giving you nightmares in terms of governance.

If you’re a vendor you’ve started to embrace this shift. With a variety of fortunes.

Maybe you’ve already been riding the wave that allowed to step in the enterprise market while you used to be a consumer company.

Maybe you’ve been challenged by your clients. The time when you used to sell software to IT departments that only checked the functionalities without any consideration to the user experience is over. To some extent the logic was “the more austere the better”, what kept alive the vision of an elitist IT “for the few of us”. Today you need to convince IT and sell to line of businesses, to people who always compare you to Google, Apple or Facebook, saying your product is not appealing at all.

Is it possible to be successful in the corporate IT with no experience with employees outside ?

Last case, you’ve been slowly forgotten or neglected by your usual contacts. As we saw, they are taking more and more advice around them and involve end users in their decision making process. If you kept your usual B2B approach you might have moved out of the radar. Of course they still know you exist but you’re not anchored in the collective unconscious anymore and, even worse, you don’t have any shared experience with the people that will be involved in the decision process at any time in any way. If you sell specific business application it may not matter but if you offer applications that are supposed to be widely used by everybody, then you may have a problem.

Communicators often say that it does not matter if people say nice or bad things about you, what matter is that they talk about you. It’s quite the same in IT : it’s better that end users and those who impact the decision know you even with a improvable experience than not knowing you at all. By “knowing” I’m not talking about spontaneous awareness but about “knowing by using”.

So, vendors that have both an offer for consumers and for businesses gained a competitive advantage. Maybe their interface is not that nice and the experience can be improved but it does not matter. We use them on a daily basis at home and can imagine ourselves using them at home without starting from scratch. We have habits, markers. They are what they are but they impact mindsets.

It became obvious when I read these words from Constellation Research‘s Alan Lepofsky in this post :

“What IBM is lacking,” Lepofsky said, “is that consumer appeal. For example, consumers can use Outlook.com, Onedrive and Skype, but IBM does not have a hook into the consumer space.”

In short “it’s as good and even better than competitors but no one has the opportunity to use/experiment it in their personal lives”. Which is also true for many legacy leaders in this industry. Talking about one of them having a recent but promising new offer, I recently heard “What ? They’re doing collaboration/social software?“Â

Is a B2C approach the prerequisite to B2B selling ?

It raises a question : at the age of IT consumerization, must vendors be deeply anchored in the consumer landscape and, i f yes – how, if they want to sell to businesses ?

There are many possible answers.

We saw that it’s more than desirable. It helps to be in the radar of people who, unlike 10 years ago, become influencers, advocates within their company. It’s also a means to reach more people, gather more feedback, try things before implementing them into enterprise products. Today no vendor can ignore it if he’s in the collaboration industry but it’s also becoming true for more specific business applications.

So, of course, many vendors are not following this way. But two things have to be known :

– a large part of their offer is not in the “consumerized” field. What balances things.

– they can hit a glass ceiling when it comes to move from being chosen locally to deployed globally.

A first step can be improving one’s digital footprint.If your not being used it will at least help to be known, recognized and to catch attention. But IT consumerization needs a real experience. Issuing products for th consumer market ? Hazardous and even irrelevant is it’s not your strategy and your business model is optimized for something else. Start a freemium offer with a light version of your enterprise one ? Some have tried. Sometimes it works, sometimes not.

The governing principles of the employee experience

It's good to launch a new concept, but you still need to know why you're doing it and in what direction you're...
Read more
Customer relationship

Omnicanality is the enterprise's new Holy Grail. Firstly because it is the logical evolution of e-commerce that we have known for a...
Read more
Employee Experience

A complicated IT experience. Irritant #7 of the Employee Experience

In the mid-2000s there was a lot of talk about the consumerization of IT in the workplace. This term referred to the...
Read more
Human resources
00:02:29

Golden Bees is one of the startups that caught my attention at Unleash18. It is a solution that for me is at the crossroads...
Read more
Customer relationship

Being Digital in 2018 : stop making your clients stupid

Being Digital in 2018 : don’t be frustrated nor destructive

Many people don't understand why others are reluctant to embrace the unavoidable changes caused by digital. I say reluctance but I could also say...
Read more

What is the difference between an Employee Experience strategy and an HR policy?

My manager doesn’t do anything. Is it an issue ?

Why HR and managers should have watched Bayern Vs PSG

What methodology to build an employee experience program