Are your employees really hopeless at digital ? 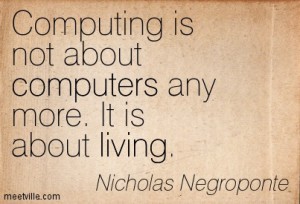 A company decides to tackle its need for digital transformation. Not only to provide new trendy devices and tools by make employees make a relevant use of them. Make them think what they do, design propose “right” to be aligned with the world that surrounds them.

A dedicated team is set up, reporting to the highest executives in the organization. They start with sourcing and prioritizing everything that will need to be addressed, the key success factors. As they know that it’s not a matter of technology but of mindset, of DNA, as know that people fear change, that their fast moving environment is anxiety-provoking for already under pressure employees, that a digital culture ils bottom-up, they are fast at identifying what matters : employees. Employees, which are hopeless at digital, don’t understand what it is and fear any kind of change in their day-today lives.

This story, of course, is not the one of a specific company but of most of them. Maybe you’re asking yourself the same questions in your own organization. Before going further, let’s focus on basics.

Why are organizations questioning themselves in such a way ? Because of the pressure of the market, of their competitors and because of customers that have become the external factor that impacts their strategy the most. Customers are connected, social, mobile, demanding and businesses need to adapt and get equipped to face them, serve them and even work with them. The problem is that employees are the exact opposite of customers.

So, obviously, in this picture you can see lots of customers and only one employee (circled in red). 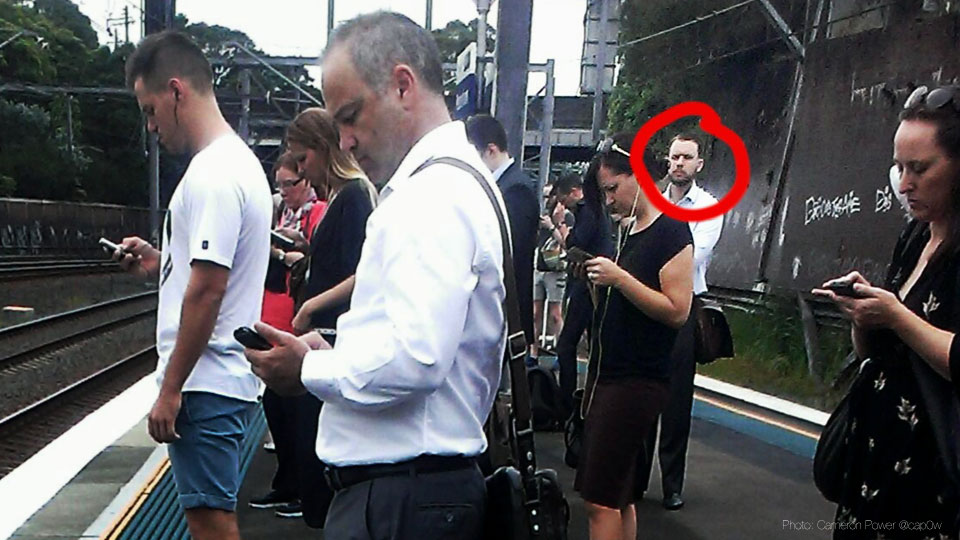 Between 2005 and 2013, all the people attending the Pope’s nomination must have lost their job because of the crisis. In 8 years they have become internauts, customers, but are not anymore the employees one can meet in any office. Or they are other’s employees, not yours. 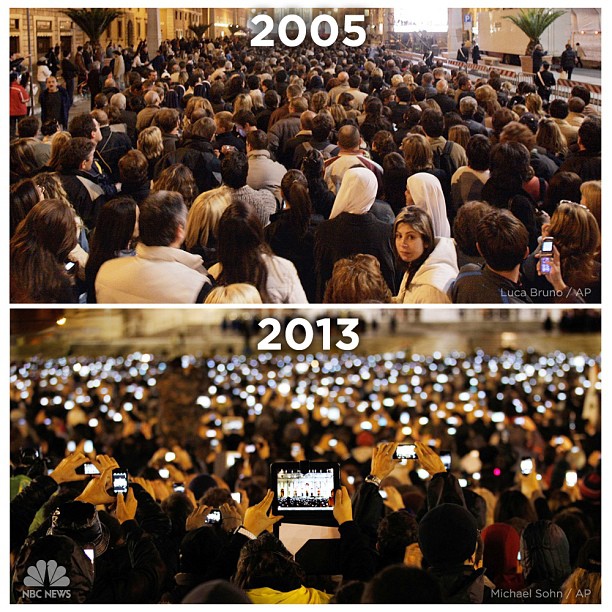 Easy. To get the unemployment trends and numbers in the future we’ll only have to track the number of people using Facebook. Ok. I’m exaggerating. We all know that there’s a big difference between being on Facebook and using it well.

In short, none of these hundreds of million people – even billions – which behaviors and expectations make businesses panic is working for any business.

Employees know everything about digital

The truth is that these people are your employees. With a closer look, how many unofficial digital initiatives could you find in your organization ? Your employees introduced blogs and wikis in the workplace in a clandestine fashion in 2004, someone at the marketing department started an underground twitter account with an intern in 2011 and have been trying to secretly try new things for a decade to be sure you would not forbid their initiatives.

And since it’s more simple to experiment things when far from the center, how many local initiatives driven by aware managers or inventive employees were successful but never recognized or duplicated because the idea did not came from the top ? Maybe not that much but enough to show that things are happening in your company, there are leaders, digital savvy people and surely more than you think. Enough to start dynamics in an exemplary manner rather than promoting cases imported from the outside.

Employees are customers and internauts like any other. Among them you’ll find the same ration of leaders, early adopters, followers and laggards than in the civil society. Maybe you already know the people you’ll need but you know them for the wrong reason : too advanced regarding to what you think your company is, they’ve been put aside so they won’t disturb.

This is the typical distortion of vision when the HQ looks at the fied. “We know, they don’t”. The times when knowledgeable people were at the top of the company and ignorants anywhere else is over and businesses have lot to learn from the field provided they take time to talk with people and listen.

Employees lose their digital culture when they step into the office

So what’s the matter ? Once they pass the office door employees lose what makes them the customer or the internaut which digital side is putting businesses under pressure. Whose fault is it ? Finding someone to blame is too easy. It’s a matter of system, of environment and we all know that if the environment one works in pushes people in a direction there are few chances they follow another.

The goal is not that businesses teach “digital” to their employees. They already know and experience it and thinking that a Facebook and enterprise social network training will be enough is a big mistake. What they need is to :

Understand what digital means for the company, what leads to strategy issues. If a business is not knowing where it’s heading and has words copied from blogs or conferences where a project manager was sent, the issue is not at the employee level.

Understand what it means for them, in their own job. It’s a matter of acculturation to think different, to explore new fields and, most of all, a matter of sense. What’s expected from them, to what extent can he go, what’s acceptable and not in terms of personal initiatives, what’s about the right to fail. Knowing what peers (and not people in another company and culture) have done to get inspiration from it.

Understand what it means for others, what puts the issue at the management level. We already had the same with enterprise social networks : managers must not adopt as employees but as managers. Managers are the one who have to make success possible for others so they need to understand why the others need to make the most of change and put them in the best possible condition, make them feel safe, enlarge their comfort zone even it means going out their own. No digital employees without digital managers.

Being in a dynamic, not in a training logic because digital is something one lives, experiences. You don’t learn digital acquires it through experience. An immersive approach among peers is much more valuable that a formal training one. It will be more efficient, perennial and less costly. The other solution is to train employees, at the enterprise scale, through formal classroom learning, hoping digital won’t change too much before the end of the process. Doomed to fail.

Employees are not hopeless at digital. They have problems with sense, coherence and alignment. That is not something that can be fixed at their level.

Employee helpdesk and enterprise ticketization: instructions for use