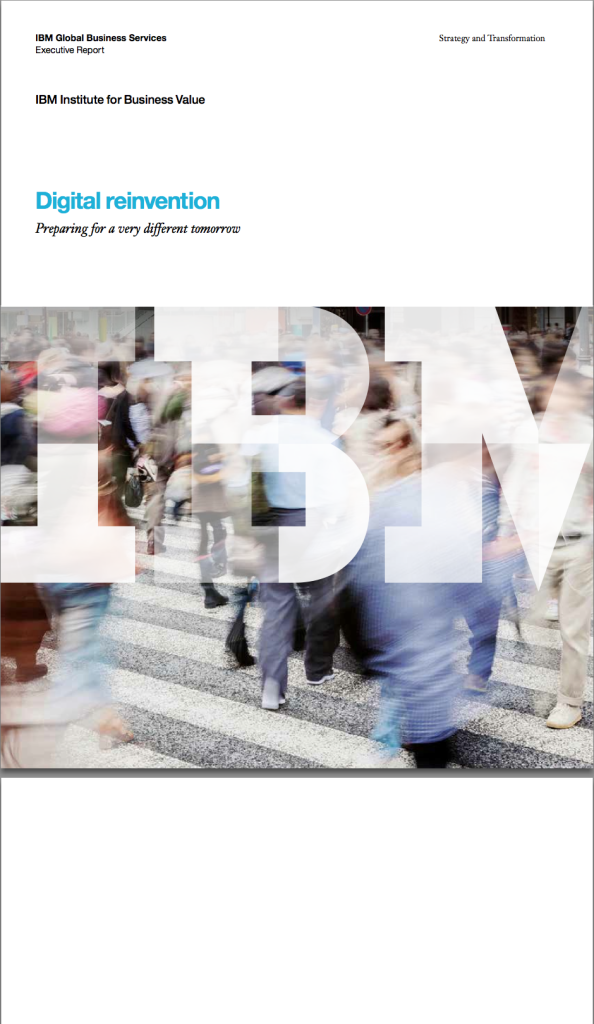 Among the many studies on digital transformation, one recently caught my attention. Issued by the IBM Institute for Business Value, it’s titled “Digital Reinvention : Preparing for a very different tomorrow”.

I won’t discuss the use of the word “reinvention” even if I find it meaningful. Businesses have spent years digitizing the existing instead of reinventing themselves et and their business models, what explains their mixed-feelings about digital transformation. Things started years ago with enterprise 2.0, then came social business and, more recently digital transformation without leading to very different results – particularly from an internal transformation perspective – : as long as the transformation does not mean more than repainting the faÃ§ade it’s difficult to make sense of new tools and work models.

That’s what caught my attention in this study : it’s not based on the use of social media and digital interactions but on the evolution of business models, from which the rest arises.

An economy centered on individuals

The founding assumption is that we’ve entered an economy centered on individuals. It’s not coming, it’s here. It’s not B2B or B2C anymore butÂ  People-to-People. Everyone to everyone. If the change is caused by technology, technology is not the response. Or, at least, it’s secondary. As shown in the diagram shows, priorities are changing. The focus is more on customer relationship and changing business models than on technology adoption. Another interesting point is that cost reduction is becoming less important. That’s an evidence that there’s not much left 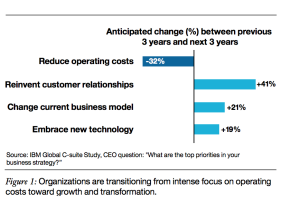 to optimize in existing models and that new ones have to be found to move forward. Let’s remind that endless cost reduction leads to a limit : the zero-cost organization. It does not have employees and machines anymore, does not produce anything…and does not make any money. But, at least, it does not spend any cent.

So we’re moving from an economy centered on organization to an invidual-centered one. What are the differences ? 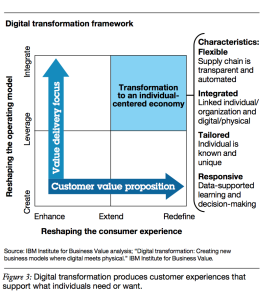 It’s not about standardization anymore but about small segments (even markets of one) and based on predictive models. In ten years we’ve moved from the need to gather people and make them interact to building an environment that serves them. If the economy is centered on individuals, the model it will run will be based on data.

Then comes an analysis I found more interesting than all the stuff we’ve read before based on things like “people connect, network and interact”. Here, the approach is more structural and based on customer experience. Much more structuring because it’s about supply chain, the link between digital and physical, the personalization of experience and the responsiveness made possible by data.

The next part of the study is an analysis of the concept of value chain and the way it’s impacted by digital. It makes it clear that businesses need to have a very structural approach. Social media adoption won’t transform businesses if the value creation model does not change. I hope it means the end of window-dressing initiatives and the beginning of a real transformation of the lower layers of the organization, of the business mode. People don’t change the model and make it live – or not only – : the model helps people to make sense of change.

There’s a special attention paid to the concept of ecosystem. As a matter of fact, to make business models based on the participation of a large number of stakeholders work, everyone must find something for them in it. It raises the question of sharing and distributing the created value among economic and non economic players (people used to participate without anythingÂ  in return…as it often works today).

A digital maturity model is proposed, showing the different stages of the digital era. 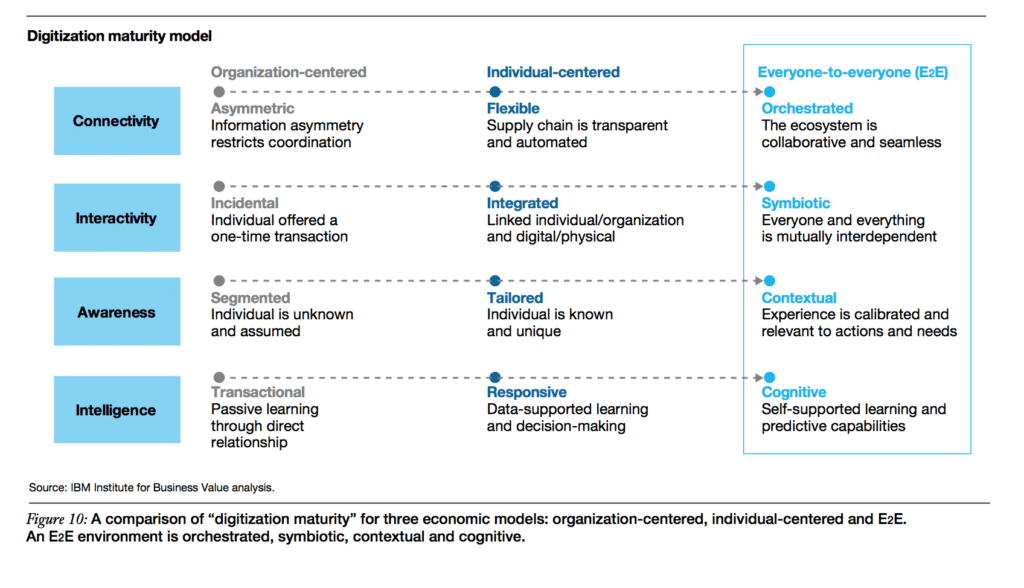 The digital reinvention is based on seamless and collaborative ecosystems. We already know what collaborative means…that’s the community and network effect. But the study raises a new and very interesting point : the automation and transparence of the production chain. In other words, the digital economy is notÂ  made of people only : data are players like any other and optimizing their use without waiting for people to make something of it will be very valuable.

One more evidence that social chaos and wisdom of crowd don’t do everything and that structure and automation are needed to run the model.

Contrary to an organization-centered economy where interactivity is incidental, only happens when the transaction needs it, individual-centered models integrate interactivity as a founding principle. From a long term perspective, the model will become symbiotic and everyone and everything will become mutually interdependent. The “everything” is worth being noticed : it shows the growing importance of connected objects. Symbiosis will not only happen between people but between people and objects and even between objects to fluidify interactions between people.

The individualization of the customer relationship matters. I’m not talking about the relational knowledge developed through web-based interactions but about the importance of cognitive systems that will help to make decision based on what one is as a person, not because he belongs to a market segment. That’s about the “markets of one” made possible by an intensive use of data.

In the end, the digital organization features

To end, the study recommends defining priorities not based on what technology makes possible today but by following the most profitable ones. Understand : “don’t worry, technology is secondary and will always follow. The slow factors are people and organizations”.