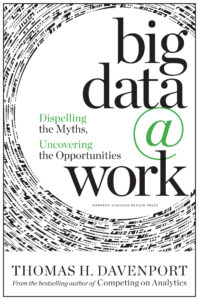 In his new book, Thomas Davenport explains why and how to design and deploy an enterprise big data strategy.

If data are the new oil and Big Data one of the major challenges for the coming years, moving from concepts to actions is still a problem for many businesses that lack clear points of reference. Big Data at Work: Dispelling the Myths, Uncovering the Opportunities

will help businesses to understand what’s at stake, the benefits they can expect, how to make it work and the human challenges related to big data.

For those who were not following this matter a couple of years ago, Thomas Davenport was, with Andrew McAfee, one of the biggest contributors to the enterprise 2.0 debate in 2005-2007. It’s interesting to see that the one is now focusing on data and the other on intelligent machines. Maybe we should consider this as evidence that the debate on organizational performance has moved and changed nature.

Is Big Data perennial and here to stay ? That’s the first question Davenport deals with and the answer is, with no surprise, “yes”. First because using data for BI or analytics is nothing new. Many businesses have been trying to make the most of data for years. The only difference today is how fast data can be processes and the variety of data that can be used. We have more and more data and the advent of connected objects will do nothing but increase this trend in a way no one can imagine. More, the social web and the explosion ofÂ  user generated content made it vital to deal with unstructured data. The capability, beyond descriptive and predictive analysis, to conduct prescriptive analysis (what should be done to meet a gold) is a major improvement that makes big data a game changer. To end, Davenport says that we aren’t even able to imagine today all the things we’ll be able to do with big data in the future.

The next part explains what big data can be used for and by whom. Four scenarios for the future help the reader to embrace the power of big data and how in can transform some industries. Then an industry based analysis lists the benefits that can be expected and studies the state of maturity of the major industries. Bottom line : if big data will impact all the industries, all the functions of the enterprise, the urgency is not the same everywhere and some industries are much more advanced than others. But it does not matter if you sell online services, furniture, turbines, if you’reÂ  a farmer or an organization like UNO…you have something to do with big data and if you don’t go to big data, big data will come to you.

Once one has understood that big data was worth his attention, whatever his industry, it’s time to think about designing an enterprise big data strategy. Since there’s no strategy without goals, the first thing to know is what you want to use big data for : Cost reduction, time reduction, developping new offers, decision making.

It’s important to make the difference between big data initiative in “discovery” (discovering opportunities) or production (integration at scale within existing systems and processes) phase and according to the goal being pursued in order to build a manageable initiatives portfolio. Obviously the constraints are not the same in each phase and initiatives should not be managed in the same way : in the one hand creativity, right to fail, experimentation, on the other scalability and reliability. Don’t expect that even half of your initiatives in discovery phase will move to production phase…

Considering all these factors for each initiatives is essential to decide who should be involved, what data should be used, how fast to go… It’s possible to be either conservative or aggressive : it all depends on the need, the context, the goal…and the corporate culture.

Then follows a part that’s too often overlooked : the human side of big data. But if, like me, you were expecting something about change management and culture you may be disappointed : this part is all about the people who make big data work : the data scientists. Businesses must to understand what is a data scientist, what are the required skills, how to find, hire and even manage them and what to do with their “old” statisticians. An interesting lesson learned from businesses that are actually doing big data is that it’s so hard to find people with all the required qualities that it’s sometime easier to build teams with people having each one part of the needed skills and to make them collaborate effectively. There’s also a couple of valuable insights on how to manage these professionals of a new kind whose scarcity makes them very expensive. As for change management, it will be dealt with later, in the part about success factors.

The next part is about technology. I won’t elaborate much on this matter but my opinion is that this part is pretty well written so non-IT people like me can understand what the challenges are, what kind of technology is needed. No enough to become an expert but enough to be able to talk with IT people without looking totally clueless.

Then come the success factor. Data, (what data, how to manage them), enterprise (its maturity), leadership (how leaders get and support big data), target (where and why to use big data), analysts. Two other factors are also key to success :

– big data integration with legacy (processes, applications…) in order not to create a bubble without any impact. In my opinion that’s even the biggest challenge : it’s often easy to conduct experimentations, get enthusiastic, but when it comes to really get big data to actual work it challenges so many things, breaks so many bearing walls that one should expect to face a lot of resistance.

It’s not a surprise that most of the examples Davenport mentions are young IT companies, often from the web industry, that had to deal with big data from their very first day even before big data existed as a known discipline. The cleared the mines, build the road and established good practices for others. Most of times the fact they had few or no legacy allowed them to start from scratch, what is a chance old large companies don’t have. Most of large business has to deal with their legacy, their existing processes, find the right balance, integrate.

The last chapter of the book is dedicated to large and “old” businesses, what they can learn from startups and how some of theme did to become successful in big data. There are lots of success stories involving such companies despite of their specific constraints.

I don’t have much to add. Davenport’s book is not about any revolutionary approach that can lead to endless discussions, he’s not selling any new management theory. He states what’s actually happening and how to make things work. Not more, not lesse…and that’s really good.

Digital transformation works but does not scale

For the third year in a row, IBM, the BCG and the EBG issued their report on the digital maturity of french businesses (document...
Read more
Data

At the times when digital mainly meant collaboration and knowledge management, businesses quickly realized that the principal barrier to success was trus (or lack...
Read more
Digital Transformation

Industry 4.0 : the dark side of the digital enterprise

Digital transformation often goes hand and hand with customer experience and the highest priority is often given to marketing and customer relationship initiatives. It...
Read more
Data

Thriving in the data economy requires a legal framework and boldness. An Interview with Mouloud Dey, SAS.

Everybody's talking about the data economy but few are really doing it. Some are aware but don't know where to start, some are stuck...
Read more