Enterprise social networks : what to expect, at which price ?

What’s important when a social collaboration project starts is to gauge one’s effort and expectations according to one’s potential.

It’s been nearly ten years that businesses have been trying to improve the way they collaborate, their collective intelligence and effectiveness through technologies inspired by the social web. It started with blogs and wikis deployed in an unorganized fashion, on the end-user’s initiative, then came more exhaustive and integrated approaches with enterprise social networks, most of time at the company’s initiative.

Where do we stand now ? Results and feelings are mixed. Impressive successes, less and less failures (but failure still happens) and, in most people’s opinion, many halve-successes. Of course, the definition of an half-success is very subjective : it all depends on the goals that have been set and seasoned observateurs will always be likely to say that things don’t happen fast enough, that organizations can do better, be lore ambitious while the result matches the reasonable expectations the company have set.

When I stand back to observe such projects, my first focus is not success. First because I don’t always know what was really expected, second become success can come in many forms. Some will be happy to see people using a social platform for any reason because that’s a good start for them, others will expect a process-based ROI and others will content themselves with an enterprise-wide water-cooler to foster a feeling of belonging. Not of these goals is wrong, it all depends on the company’s context. Highly performing businesses will try to perform even better while those in a poor state will try to improve engagement and social links before having a more productivity-driven approach.

What I think about first is to put in perspective the effort, the result and the change potential. Rather than “it’s good” or “it’s not enough” I’m more likely to say “whatever their means they could notÂ  have done better” or “it’sÂ  a pity, they could have done more without much effort”.

Even if any business can make something of such initiatives and, anyway, can’t overlook this matter, they’re not all equal regarding to enterprise 2.0, social business or social collaboration. But putting my thoughts together I came to a series of findings, some obvious, some not.

1Â°) It’s hard to have quantifiable objectives at the star of a project. Because businesses don’t know much about the matter (what’s logical) and because success depends on so many factors that are peculiar to each organization that it’s impossible to base one’s criteria on another company no matter it looks very similar. So some companies have results that exceed their expectations and others that are below. Are the first successes and the second failure ? No. Each business made the most of its potential at a given moment, in a give, period and some had a higher potential. Each followed its way and get what it was possible to get. It does not mean than five years later those that looked late won’t outpace others. They only need more time.

2Â°) Budget and means don’t explain all the success. Don’t make me say what I’m not saying : improving collaboration through the deployment of an enterprise social network comes with a price in terms of technology and change. But, on the other hand, the budget is not the limit : it’s the change potential of the company at a given moment. In some organizations you can get highest results by increasing the means, in others the limiting factor is elsewhere. You can triple the budget and still face the same hurdles and won’t be able to go either further or faster.

3Â°) So the challenge is to well size expectations and effort according to the potential. Knowing that if more money in change management will lead to better results or if overinvesting will do nothing and it’s better to get ready for a marathon that will require more lime but less instant energy consumption.

So we need to find a way to assess the potential in order to size the effort and expectations. The number of possible indicators is high but, overtime, we can realize that not any indicator are as relevant as we may think.

For example, if we consider employee’s digital literacy, it appears that if it helps to know how deep the change will be it’s not a primary factor. Experience shows that a strong leadership helps to go far even with “non-digital” employees and, on the contrary, a strong digital literacy is not enough to fight against the inertia and lack of awareness of leaders.

The most limiting factor is the change potential of the organization.

Corporate culture ? In many cases it will need to be reinvented.

In the end, to avoid a complicated matrix, it seems to me that two factors tell how capable an organization is to move forward on its way to social collaboration, to enterprise 2.0.

The first one is urgency. There’s no question that any business can benefit from better collaboration but knowing if changing structures, breaking down silos, going out of one’s managerial comfort zone and forget decades old practices is not obvious for many organizations. Some industries have to reinvent fast because the wall is close or has already been hit. Others know that they will have to change but still have time : margins are high, markets hard to enter and they are more likely to optimize the current organization than to transform it. At least from a short term perspective.

The second is leader’s involvement. All businesses have once stated that collaboration, innovation, digital was a major stake, a priority. But what really changed ? The point is not to have a sponsor but the right sponsor. How many leaders say “it matters”, “we must move forward” then leave the meeting room to focus on something else waiting for change to happen. By involvement I mean the will to change to make things change, in a visible way.

What is shown in the following chart. 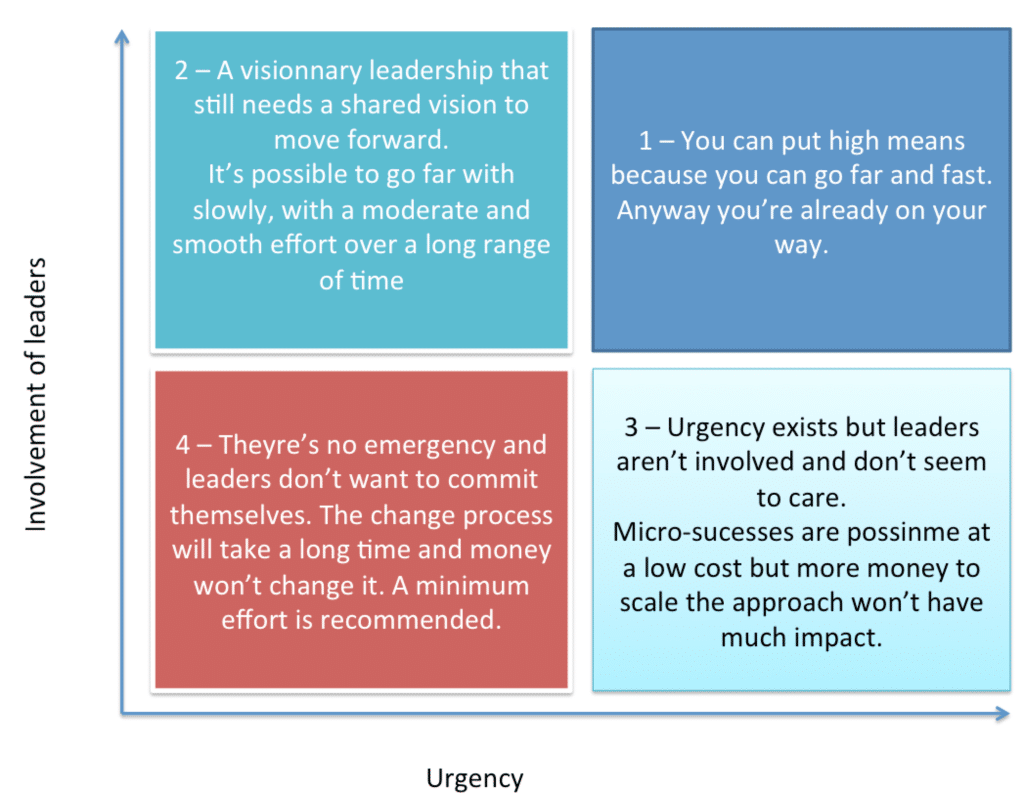 1- Emergency exists and leaders are involved.Â You can invest a lot and expect high results. On the other hand, if you’re in such a company, you many not even have to ask such questions. The the change process started a long time ago because your company considers change as a natural and ongoing process, as the norma. You certainly started to change your values in management practices many years ago, long before you heard the word enterprise 2.0 for the first time and your enterprise social network looked obvious when it was deployed because it was seen as a way to put work practices at scale.

2- Leaders are involved but there’s no urgency. Your company is doing well right now but know what the future will look like and wants to anticipate. You’re in a smooth and progressive change approach that will take a long time. There’s no doubt change will happen but il will take time. High expectations or massive investment won’t help that much to change the company, the current “comfort” being the limiting factor. Start small and be ready to speed up in a couple of years.

Sometimes it’s better to “built it and let people come”

3 -Â  Urgency exists but leaders don’t get involved. It happens frequently. Either leaders can’t see that change is needed (at least this kind of change) or they get it but don’t want to get involved. Don’t expect high results at the company scale but try to make success happen where it’s possible. You can target some matters, teams that have the right predispositions, are in the right context and can move forward without the support of support from the leadership team or even from management. You can invest and even set high objectives but on small scopes and scale. Forget any global transformation plan : it won’t work and will only make you spend money for nothing. Make the tools available and wait for things to happen. It will take 5 years or more but, slowly, people will start using them. Anyway, nothing will help you to speed up adoption.

4- There’s no urgency and leaders don’t care. Less frequent than the previous case but still prevailing in many industries. There are people in your company who know that improved collaboration will be good but neither the economic context nor the leaders discourse helps them to move forward. Everything is fine right now so there’s no reason to change. No matter you can spend $50K or $15 000 000 to drive change : it won’t work. So you must be very cautious regarding to your expectations and don’t invest a lot. Build the technology, provide tutorials and best practices and things may happen. Slowly, very slowly but don’t even think you can go faster or at a higher scale. Maybe, in 5 years or more, you’ll have enough success stories and adoption will speed up by itself. But no matter the energy, time and money spent, no heavily-funded adoption plan will change things. The only thing a massive change initiative will lead to is frustration, clashes and unreachable goals.

In fact I still see too many organizations in the quadrants #3 and #4, investing a lot while the organization does not need to change or does not want it and not being ready to do less and take time to let things happen.

At this point you could tell me that it’s the same for digital transformation, in its broader meaning, and that it does not work only for social collaboration. That’s what I thought at the beginning but I changed my mind over time. First because, even if needed, having involved leaders personifying the approach is less critical in customer relationship than in internal collaboration. Then because urgency is not seen in the same way : sometimes it’s not perceived from a collaboration perspective (rightly or not) but it’s always seen as critical from a customer relationship perspective. A given organization can have two radically different standpoint on each matter (and it’s often the case). More, the fact that customer relationship always prevails make businesses pay less attention to how important it is to change internally, what means less budget and priority. It’s obvious than when it comes to customer relationship there are less organizations in the quadrant #4. Having two parallel scorecards will eventually help to show how coherent a digital transformation strategy is while it needs both sides to really take off.

That’s all. These are nothing but my own thoughts and it’s worth what it worth so it’s open to discussion. But I think it reflects quite well what we can observe in the field.

Previous article
Links for this week (weekly)
Next article
The digital enterprise is like planes : drawn, not supported