Previous articleEnterprise social networks : what to expect, at which price ?
Next articleLinks for this week (weekly)
Lire

The digital enterprise is like planes : drawn, not supported

Digital transformation is something binary. Historically, it’s been made of two disciplines. An internal one, collaboration, collective intelligence and efficiency driven and an external one rather focused on customer relationship. Despite the time that passes, we still see businesses favoring one over the other, dealing with each separately and not in a fair way.

The reason of this separation is easy to understand. Collaboration is everything but new : it’s evolving, the concept is improving (at least…the name changes) but, in the end, few progress has been made since the 50s and Peter Drucker despite of all the technology innovation that happened meanwhile, most of all these 15 last years. On the contrary, customer relationship is a younger matter.

Historically, the internal side has been the filed of organization, management and sociology theoreticians and and had the time to gain respectability over decades, since the middle of of XXe century. As a matter of fact, should we talk of enterprise 2.0 or social business, the technology-oriented wording shouldn’t make us forget that it’s a matter which concepts dates from more than 50 years, concepts that are still referred to and which obsolescence haven’t been proven yet. On the contrary, the customer relationship side is tied to communication and marketing and is just starting to gain respectability. Don’t forget that while Drucker, Deming and other management theoreticians were pontificating at Ivy League Schools and in front of leaders, advertising executives of that time (marketing was a young discipline then) were seen as futile entertainers (remember Mad Men ?). So it’s logical that, for a long time, businesses have considered that they had to start from the noble matter before caring of superficial aspects. Even more the idea according to which external facing practices won’t be successful if not a part of people’s day-to-day work was more than credible.

Then, these two sides have never been handled by the same people. Communication and marketing people for the one, HR, internal communication and even IT for the other (yes…collaboration is a matter of tools). Even the service providers businesses rely are not the same depending on stream. One more reason for anyone to say “my part prevails”, even if, in the end, it broke enterprises in two and siloed projects that were global by nature.

Now, thing have changed and the customer relationship side is taking the lead. Some people – me included – were not happy to see the internal side becoming secondary and even overlooked. Not for petty squabbling reasons (“that’s my field”, “it’s my market”) but because if the one drives, the other is still necessary.

To explain how things work, I decided to use a metaphor based on planes. Let’s draw a parallel between the digital enterprise and a plane.

Experience proves it : employees asked to collaborate for collaboration sake don’t see the impact of change. On the contrary, businesses with a strong customer orientation started from the need to improve the zone of contact between them and the customer and that’s what pulled change internally. I usually say that “if you don’t sell more or spend less, change is nothing but window-dressing” and that’s exactly what happens here. The more people see their contribution to the revenue, to customer acquisition and retention, the more things make sense. And the easier it is to mobilize those who’ll be in charge of making the new promise a reality. 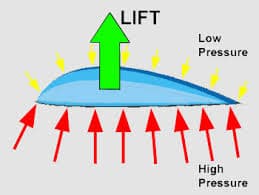 Back to planes. The sucking up phenomenon is caused by the difference of speed between the air above and under the wing (hence the form of the wing, the air upside having a longer way to go needs to go faster). The parallel with the enterprise is quite funny because the world outside of the enterprise is going faster than the inside and sucks the enterprise up in a change area.

So, improving the customer side is enough to pull the whole enterprise ? Not at all. Pressure doesn’t lift plane up, difference of pressure does. No matter the pressure above the wing, a higher pressure is needed under. In the company this higher pressure in made of people engagement, corporate culture, management models etc. that push a new value proposition to the market.

Marketing and customer relationship are pulling the change, are sense-makers and help to trigger things but the internal side is here to keep the promise and prevent the house of cards to collapse, the enterprise to stall.

If your organization is not flexible, it’s going to break at the first turbulence

Since we’re there, let’s push the comparison further. A wing is flexible (FYI the extremity of the wing of an A380 can go 6m up and down, what means a 12m range !) because if it were rigid it would break at the first turbulence. Think about when you’ll redesign your organization, processes and redefine people’s’ roles. Your wing is where employees and customers meet. Too much rigidity will make your enterprise break in the air.

A metaphor that’s worth what it is but if it can help to deliver a message to your employees or board it’s better than nothing.

Corporate silos are the enemies of collaboration, knowledge transfer, problem solving and innovation, contribute to its complication and undermine engagement and sense...
Read more
Collaboration

So what? More or less productive in remote work?

This was one of the great objections of those who, rightly or wrongly, did not want to hear about remote work: it...
Read more
Customer relationship

Clients and projects: irritant #12 of the employee experience

It was impossible to review the irritants of the employee experience without talking about what is central to any business, its raison...
Read more
Collaboration

While it has been two months since companies have been immersed in forced remote work, they are beginning to learn the lessons....
Read more
Customer relationship

Omnicanality is the enterprise's new Holy Grail. Firstly because it is the logical evolution of e-commerce that we have known for a...
Read more
Employee Experience

An organization that is inconsistent with the way we work. Irritant #6 of the employee experience

When you want to know who does what in a company, there is a very simple way: look at its organization chart....
Read more

How do you recognize a good employee experience?

Why it is sometimes necessary to refuse to tackle a problem ?

What are the benefits of a good employee experience?