[Quote] In God We Trust, All Others Bring Data (Deming) 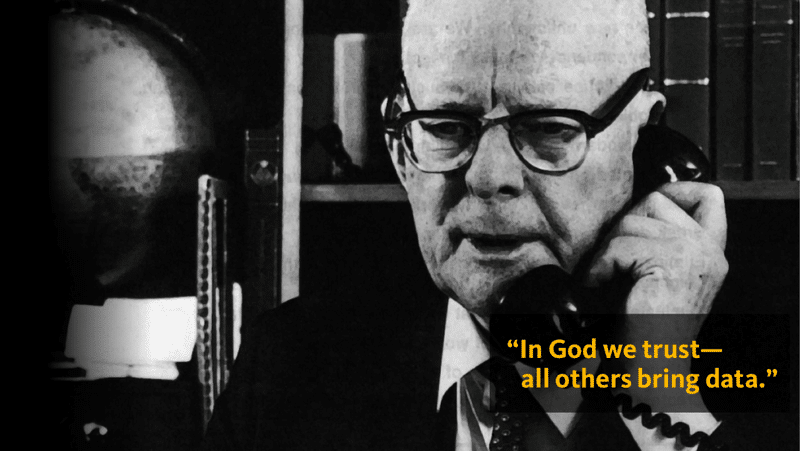 That’s a quote many people like to mention but that’s widely overlooked when it comes to actual work. It says that expect in one famous irrational cased based on personal beliefs, no one should trust anything that’s not backed data.

If you were thinking that tools, methodologies, indicators, dashboards and KPIs were helping organizations to make rational decisions you were incredibly wrong. And some upcoming trends are going to turn some managerial habits upside down.

For example, despite of the many tests and recruitment methodologies used to make sure that the “right” candidate will be hired, 85% to 97% professionals rely on their intuitions to hire someone. A whole optimized process ruined at its last step. Generally speaking, to use Andrew McAfee‘s words, the prevailing decision making model is the “HiPPO” (Highest Paid Person Opinion). In other words, the opinion of the highest paid person at the table prevails. Or, to use another well known expression :”since we have no data, let’s go with my opinion”.

Most decisions are irrational

No data. No relevant data. Maybe it used to be true but things are changing. Today we can get nearly all the data we want and can process them to get descriptive, predictive or prescriptive insights…provided we know what we’re looking for. Data will win against HiPPO and if everybody agrees to say that’s something positive, things may be more traumatizing than expected.

We already saw the advent of something similar in organizations when social networks allowed communities to form and experts to emerge to solve problems in an adhoc way. In the first times the HiPPPO rule was prevailing but, over time, decision making practices changed and the expert took the lead.Whatever his position, the expert became the person people listened to.Â Â  That was not a comfortable situation for the ones used to impose their point of view because their were the bosses and, suddenly, used to hear things like “wait…we need xxxx’s opinion” or “shut up….xxxxx is going to talk”.

With the rise of big data in decision making, we’re moving one step ahead. Intuition – should itÂ  be the boss or anyone’s – won’t prevail over a good predictive analysis. This is going to have a huge impact on the role of leaders and managers in theÂ  future

The end of the presumption of infallibility of the boss

Today, and even more tomorrow, it will not be possible to be a manager for the same reasons than in the past. For decades managers have been the one who knew the answers and, when they did not, the ones with the right intuition. At some point, consciously or not, all their decisions were biased by their intuitions. Tomorrow they will be the ones capable of getting the right answers from others and from data, even if it goes against their intuitions and certainties.

We’re entering a world where statuses and hierarchical positions won’t mean being right anymore. Should it be about personal egos or problems with trusting a machine against one’s intuition, the human side of the change caused by data should not be overlooked.

Why it is sometimes necessary to refuse to tackle a problem ?

Managing others is good, but first of all it is better to start by managing oneself. Some of the anecdotes I heard...
Read more
Employee Experience

An organization that is out of sync, irritant #13 of the employee experience

The company's worst enemy is not its competitors but time. Time to understand, time to decide, time to act, time to solve...
Read more
Management

What COVID-19 teaches us about how organizations work

We are far from the end of the story and no one knows what debriefing of this episode will teach us nor...
Read more
Employee Experience

A recent barometer of employee experience showed that many of the subjects mentioned were "soft" subjects, very much oriented towards perception and...
Read more
Data

Digital transformation works but does not scale

For the third year in a row, IBM, the BCG and the EBG issued their report on the digital maturity of french businesses (document...
Read more