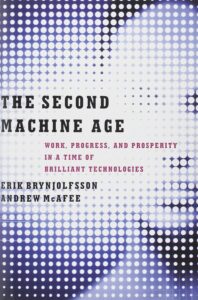 The digital world ahead of us is very promising. However, we should not believe that technological progress alone will bring prosperity to all. It may even be the contrary.

In a previous post I showed the impact that machines and robots will have on jobs and came to the conclusion that we were not ready to deal with this inescapable evolution.
The Second Machine Age: Work, Progress, and Prosperity in a Time of Brilliant Technologies

, by Andrew McAfee et Erik Brynjolfsson can ben seen as a sequel of Race Against the Machine: How the Digital Revolution is Accelerating Innovation, Driving Productivity, and Irreversibly Transforming Employment and the Economy

Don’t expect to find a nice storytelling staging the wonderful world that’s ahead. This book is more an economic research at the crossing of economy, sociology and technology and it highlights many things.

First, things we know but that many still seem to overlook or don’t understand their actual impact. Yes, more and more tasks are and will be automated and not only routine and basic ones. Computers and machines are now able to perform intellectual tasks and their progress is exponential.

An exponential, digital and combinatorial revolution

That’s what McAfee and Brynjolfsson call the second machine age. An age where technological progress is :

– exponential : we’ve reached a tipping point where any next step will be bigger than the previous

– digital : everything becomes digital (at least almost everything). Our interactions, of course, our cars, any object will become more connected and smart every single day.

That can lead to a virtual circle of economical growth. Can, because the value created in this new economy is not always tracked by current indicators and is seldom integrated into the GNP calculation. First because a large part of the digital economy is qualitative, then because a large part of the services has no financial counterpart, then because the sharing economy is disrupting models that only measure trading activities. Our indicators are not relevant anymore in this new world and can lead us to make wrong decisions.

The end of routine jobs

However this revolution is on its way and already impacts jobs. But contrary to received ideas, manual jobs are not the most threatened. The jobs at risk are routine jobs, no matter they’re manual or intellectual. In other words it’s better to be a hairdresser than an accounting clerk. However, the demand is still decreasing for low skilled employees and a high education is still the best way to avoid being unemployed.

Another thing worth knowing about this revolution is that it’s exclusive. In a digitized economy the marginal cost of each additional unit is close to zero. When one starts a digital business, addressing the world is not much more difficult than addressing one’s city. Conclusion : in the digital economy, winners take it all and there’s very little left for others. In a physical economy there will always be room for the 2nd, 3rd, 10th best car manufacturer. In the digital world the winner takes it all and no one wants to use the 2e or 3rd best service.

So it’s easy to understand where a system that allows to produce always more with less leads us. Decreasing wages and less jobs to make humans able to compete with the machines. A race that’s lost before it starts according to the authors who say that’s it’s not a sustainable approach to deal with the second machine age. In their opinion we should not try to race against the machines but to race with the machines.

Race with the machines, not against them

Successful people will be those who’ll learn to collaborate with the machine. That’s – in my opinion – one of biggest challenges of the next decades in terms of education. When they face the same task, humans and machines have two different but complementary approaches. There’s one thing machines will never be able to : have ideas. Ideation will be unique to humans for ages. So machine and humans will always be better together than if they work isolated. If you still need to be convinced, watch this video.

Learning to read, write and count, although necessary is not enough anymore. School must teach something else to studentsÂ  : ideation, large-frame pattern recognition, complex communication and mastery of self-organizing learning environments. We’re far, very far from that.

Maybe one day a machine will have all the skills humans have. Maybe. But not today.

Then the authors end with recommendations. What to do to benefit from the good sides of the second machine age and prevent its bad sides. I advise you to read the book to know more about these recommendations. It’s about IP, education, support to startups, research, tax…

The machine age : a new gold age or an age of mass downgrade ?

So the second machine age can be a new golden age where, freed from arid tasks, humans will be able to focus on what they’re good at, what they love, spend time to develop themselves. But there’s a requirement for that : this technological evolution must come with a change in society so progress won’t mean mass downgrade.

My point of view ? Like Race Against the Machine, The Second Machine Age is one of the founding books of a new era. Not only in terms of technology (honestly if you want to read nice stories about the miracle of technology and how it will make the world better there are other books worth reading) but in terms of economical research. We can’t understand the world we live in without understanding the mechanisms at work behind employment, wages, demande, prices and growth and how they’ll be impacted positively or negatively. That’s what “the second machine age” will give you : keys to understand tomorrow’s economy and make the right decisions to make the most of it, not to suffer from it.

It’s a book about political economy more than technology and I advise you to read it.

Unfortunately I’m afraid that most political leaders will never read, neither high school students we prefer teach to understand tomorrow’s world with yesterdays models. What a shame.

Previous articleWhere are the budgets of digital transformation going ?
Next articleThe Digital Enterprise in 2015 : where are we headed ?

Employee services and one-stop shopping: towards the ticketization of the enterprise.