Is change better driven through heavy and one-shot actions or through daily micro-events on the long term ? Is the anchoring of new knowledge and behaviors more a matter of repetition than of intensity ?

Most businesses are in trouble regarding to this matter ? They have to lead lots of change initiatives at the same time and are facing the limits of traditional approaches.

I’ve met Lara Pawlicz, the founder of 2Spark, 5 years ago when this learning and change platform was at its early stage. Today, after a couple of “pivots”, the model works and has already attracted some large clients.

This post is the occasion to mention a quite innovative approach to change I find interesting and effective.

We forget 90% of what we learn

Let’s start with a finding : change is a continuous change approach, most of all today when matters evolve so fast that working and changing sequentially is not possible anymore. Awareness about new matters, acquisition of you knowledge and new behaviors must be a day-to-day activity if we wan them to bear fruits in a sustainable way.

The logic behind the creation of 2Spark is known by everyone. We forget 90% of what we learn. The causes are known but still poorly addressed.

– businesses are too large and their structure too heavy to address and engage everyone in a period of time compatible with the stakes.

– trainings happen out of the context of work and knowledge does not have time to anchor.

Whatever businesses do they struggle to disseminate change and 90% of what is disseminated is immediately forgotten.

Engagement is key to change

In this context, businesses face a Cornelian choice : either their massively disseminate and accept a pour effectiveness caused by a limited anchoring, either they deeply engage their employees but must narrow the scope of knowledge to disseminate. None of these are satisfactory. The idea that sprouted in the mind of the founders of 2Spark was to address a large audience (dissemination) and to have a long term action (engagement).

The idea of a digital support came naturally. People have to be directly in touch with change/learning systems since cascading approaches lead to message loss and even to its alteration.

But there’s still an issue : how many people really use the digital learning systems they’re provided. As we saw with e-learning, these tools seldom meet their audience on a long time frame while the concept of duration is key to knowledge anchoring.

So the idea was : anchoring requires duration, duration requires engagement. The very concept of learning had to be reinvented.

Change, one minute a day

The idea behind 2Spark is propose questionnaires helping to validate and anchor knowledge – something that’s not new – but with a radically different approach : it should not take employees more than one minute a day. The purpose is to focus on anchoring through repetition and learning paths that adapt to how fast people change. The key idea is to make it an habit : 1 minute is a coffee break, a break, a blast of fresh air in the work day. So the change approach is made desirable from the employee perspective, something he’s happy to join one minute a day, a time in his day he’s looking forward to.

It requires to be very careful about the questionnaires and learning paths : their quality and relevance regarding to people’s need is what will lead to engagement. An algorithm also helps to adapt questions to the matters on which people have difficulties.

So engagement is at the heart of the 2 Spark approach since the purpose is not to force participation : what’s key to success is engagement on a short, non-intrusive and time saving.format that meets employee’s needs.

And it works since 2Spark claims an anchoring rate of 80%.

I wondered if it was possible to improve theses numbers even if they’re already higher than what we can often see. According to Lara Pawlicz, many tactics than can easily come to our minds would be counter-productive.

– if the questionnaire is pushed on the intranet, it would add noise to an already saturated media.

– if people are forced to participate they will answer anything without paying attention, what would be counter-productive.

So it’s a qualitative approach aiming at a high anchoring rate that differs from traditional models where most of the effort is on anchoring, with unsatisfying results. 2Spark focuses on engagement as a multiplier effect on anchoring rather than directly tackling anchoring. 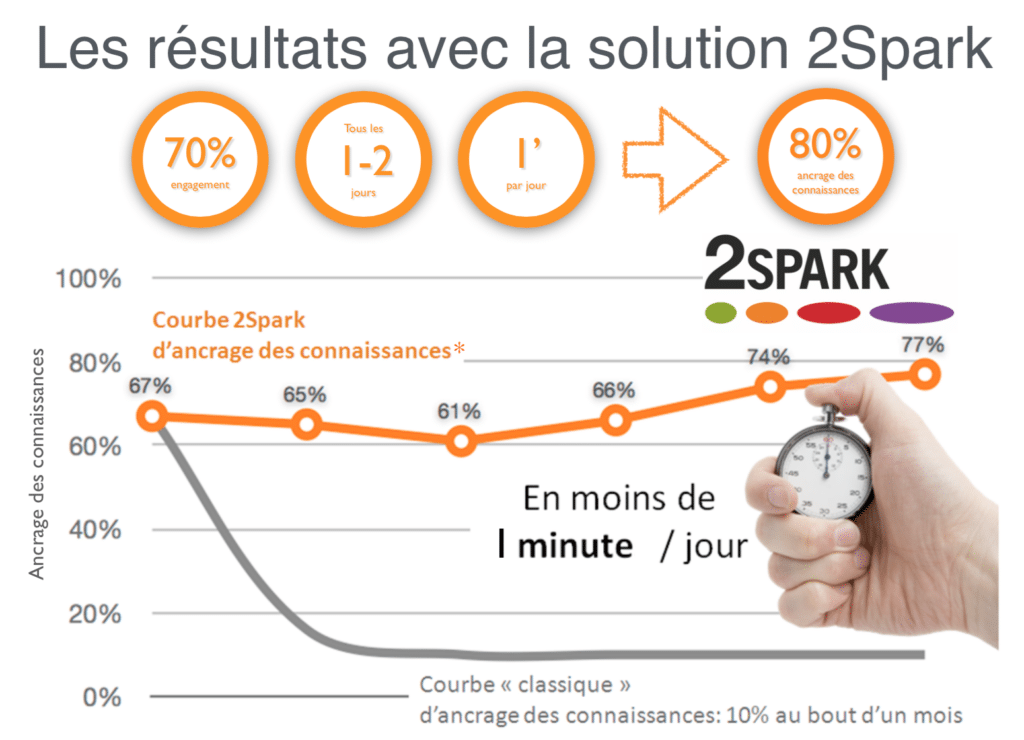 A tool and a methodology

If I focused more on the principles than on the solution that’s because I consider that – on such matters – tools are neutral provided they’re designed to support the vision. What matters here is the vision of change as a 1 minute a day approach. A chosen and not suffered approach. What explains that 2Spark pays a lot of attention on the methodology that accompanies the solution :

– questionnaires addressing operational, field issues that meet employee’s concerns so they will experience the approach as a service. So it’s important to take the company’s culture and words into account.

And, of course, a solution that makes things easy, fluid, natural, for both employees and businesses.

The future of change management is continuous learning

Some takes to end.

I’ve been very happy to see how 2Spark has evolved over the last years. Most of all because it echoes a heavy trend I’ve been observing for some time. Two examples : the hero platform used at Emakina is about the same logic, and the people from the L&D department of a large business I’ve met recently who had a approach different from what their peer do. In their opinion, digital transformation is a continuous learning process and not a traditional, sequential learning process split into modules that are delivered out of the context of work. I’ll elaborate more about that in a future post.

Top-down approaches to change management have become obsolete. They’re unable to meet both the scope and speed of change. The only fact people are considered as the “subjects” of a mandatory approach that encroaches on their already saturated work time without meeting their needs in real time make such approaches irrelevant. From this perspective the idea of focusing on long time engagement instead of instant “one-shot” anchoring looks more credible, sustainable and perennial provided the people in charge of change except to step aside.

I also appreciated the maturity of the vendor that says that even if their solution is obviously designed to perfectly support such ways of driving change, the core value lies in the global and tailor-made approach.

Since I’m rather an ROI person, a last point ended to convince me. When you can show that the anchoring rate increases to 20 to 80% and the engagement rate from 5 to 40% it’s easier to have a discussion with your board, knowing that the question of indicators is never easy in such matters. Instead of measuring the volume of disseminated knowledge, 2Spark measures the anchoring, that’s to say sustainable learning and change. I did not mention it but 2Spark proposes dashboards that allow to understand where change happen and where it doesn’t (in terms of geographic, functional or business entity) in order to take the needed actions.

That’s an approach I really believe in because it’s in touch with really and meets what businesses need in term of change management, that’s to say engagement and scalability.

Which company does not nowadays claim that customer orientation is its main concern? I wonder what they were thinking before. What we see, in reality,...
Read more
Management

In these times when under pressure from customers, competitors, technological innovation and even employees, the businesses must reinvent themselves, it is tempting to look...
Read more
Digital Transformation

Some time ago I pointed out that, paradoxically, the dynamism of the digital world could be a factor of inertia in businesses. This is...
Read more
Design

As I said here, one of the things I noticed at the latest 'UNLEASH Conference & Expo edition was the importance given to HR...
Read more