Is technology the answer to all our problems or is it an easy way to shrug off our responsibilities and capacities of judgement and decision in face of a manufactured idol ? Are Silicon Valley Gurus visionaries, resignated people facing a phenomenon going out of control or evangelists serving a dogma they concocted themselves ?

In short, it’s, in my opinions, the two questions raised by Evgeny Morozov in “To Save Everything, Click Here: The Folly of Technological Solutionism“. 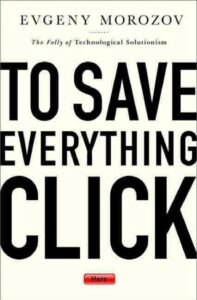 I won’t intend being exhaustive about this very very dense 300 pages book that’s easily understandable but may be indigestible at some point as thoughts and arguments follow each other without a break but here ‘s the outline of the book and my takes.

In fact Morozof is challenging two phenomenons that skew our relationship with technology in general and internet in this particular case.

First, solutionism. It’s the tendency to fix or improve things by relying on technology without paying attention to the human factors that led to the situation, without wondering about its deeper causes, without thinking about the consequences of the solution. In fine it often lead to bending the problem to make it fit in the solution even if it means not solving the original problem et creating a new one.

Then webcentrism. It’s the assumption that anything web-related is good and what happens there is better, superior to what happens offline. Consequently it makes people try to apply the principles of the web – openness, decentralisation, transparency – to all situations of the real world, to any problem.

To start, Morozov questions the true nature of internet and the web. He stands up against the assumption that the web would have an existence of its own, a will and value that are peculiar to it, like an human being or a superior an autonomous body which principles impose themselves on us. It’s followed by a criticism of the “Silicon Valley Thinkers” and of all the behaviors such as saying that “the web is like this or like that”, “the values of the net…” as it was a given, something external and superior to us, almost religious values one should respect without being allowed to discuss or change them. Principle and values some of which are good by definition and some of which we’ll have to do with because we can’t do anything to change them.

According to Morozov, the web is neither superior nor external to us. It’s built by humans, for humans and what happens there is what we want to, provided we stop deifying it, being resigned and, in fine, comply without discussion.

Then, Morozov deals web the web and technology gurus who comment industry news and spread the good words. He has two reproaches regarding to them :

– they use this posture to share their owns truths and messages without having to justify themselves or face criticism.

– they promote defeatism : since it’s from the the web the only thing we can co is bow ourselves. There are two kinds of Gurus : those who use this reasoning to push their ideas, dreams and illusions and those who abdicate all hope to change things, what leads to the same result. Things are what they are, the web will make us whatever he wants (since it’s a superior body with its own will) and we must learn to make to without any hope of changing anything.

The rest of a book tackles, one by one, all the assumptions and scope of solutionism and webcentrism to show their limits.

– an interesting criticism of the supposed and necessary transparency. Morozov doubts that openness and transparency are intrinsic to the web and, most of all, that they should be applied anywhere. Backed with examples. They also have downsides, including the price to to pay in terms of discrimination, giving up free will and submission to a body of values and fabricated norms built by others.

– the dangers of a world dominated by algorithms. Not because he’s doubtful about the potential of data, of our ability to capture them at scale and use them for predictive analysis to anticipate crimes, save lives, solve problems, but because algorithms lock us. Algorithms are opaque by definition and are in some ways biased by the values and purpose of their authors, which we seldom know, and imposes upon us decisions that have neither reasons nor appeal procedures. They often embed a vision of society and of the acceptability of such or such behavior that may change over time while but that they enforce the same way whatever the person, place and time.

– a legitimate questioning on giving up free-will and people’s accountability. Since all these stuff is leading us to a preventive age, what will be our freedom to act and what society model does it imply ? Do we want to live a world where we have our free will, are accountable for our decisions, where we have the choice between doing right or wrong, where any occasion of doing mistakes is prevented ? It’s about to visions of autonomy and accountability that imply two radically different models of society.

– do quantification and datification pushed to the extreme biases the way we make decisions ? Will they help us to make better decision of force us to comply with a norm without thinking about the “why” of our behaviors (and without questioning the merit of the norm ).

– As we’re giving up intelligence, free will and decisions in favor of the “system”, aren’t we regressing, abdicating our capacity for judgement and our will ?

Once we abdicate our free will, it’s too late to go back

In the end, Morozov knows that he can do only very little against solutionism, which, like idealism or utopism is a way to see things that will spread. He’s not techno-averse nor doubt of the ability technology has to make things better, what raises questions is the way we’re headed there ? Without critical thinking, without questionings, by devoting to a deified technology, to a fabricated ideol which we think has “THE” solution and the right values by definition.

Technology is not the matter of this book. It’s not being criticized. What Morozov does is starting a society debate, open political and philosophical discussions that will help us to frame a world able to make the most of technology while respecting people, not a world where technology imposes its model without letting us know and discuss its long term impacts.

My POV: Don’t expect a Geek Ode there or, on the contrary, an anti-tech rant. It’s more a politics and philosophy essay, even an humanities book.

Morozov puts the debate where – at least in my opinion – it should be in a world of fast and deep technology disruption. That’s not a technology issue but a society one and thinking that technology is the matter makes us overlook the deeper nature of what we call digital transformation. Without a relevant society model, the right arbitrations, clear and informed decisions, heaven may in fact look like a dead-end with no way out.

Keeping our eyes closed about actual issues makes us see technology both as a almighty God that imposes its – good by nature – decisions and as the scapegoat of anything that goes wrong while it’s neither one nor the other. Technology is what we’ll make of it but we – and those who push us in that direction by interest or beliefs – are giving up our free will, our capacity of judgement, our right to participate in a society debate. The risk is to find ourselves living in an Orwellian world in the next 20 years and say “we did not chose it, we’ve never been asked anything, we’ve not been warned”.

By wanting to make us happier – even despite us -, will technology lead us to the opposite of its promise ? As it can help us becoming more humans by handling many sides of our lives, will it make us regress by making any mistake, choice, experimentation, self-learning impossible ? Will we abdicate our free will in favor of the new web powers ?

That’s the question Morozof raises and the answer lies in his book. Technology is the solution to nothing but a tool supporting the solution. Provided we tried to find the solution, discover the deeper cause of our problems rather that finding problems that fit in the technology solutions we have. Our problems are human before all and human problems need human solutions first. Technology can help but me must decide in which direction to go before it imposes its own direction.

I also agree with Morozov in his rant against “the web as a superior autonomous body”. The web is what we’ll maj of it provided we don’t abdicate, provided we take it for what it is – a tool – and don’t deify it. It’s neither good or bad, that’s not because we apply the so-called “web values” or use any web-based thing that we’re doing better or worse. We are the ones who do better or worse.

Previous articleIT departments in the digital age : from collaboration to robots, with Frederic Charles
Next articleLinks for this week (weekly)

Leaders and managers: how far are you prepared to go to protect your “disruptive elements”.