The Future of work by Jacob Morgan : digitizing Drucker

Digital transformation is not a customer-facing program only. As a matter of fact, organizations will have to reinvent themselves internally too for the same reasons. First because the world, the society, people are changing and in the same way customers are not buying products or services but experiences, employees are asking for something different. Second because they can’t work as they used to in 1980 to keep the promise made to the customer in 2015. 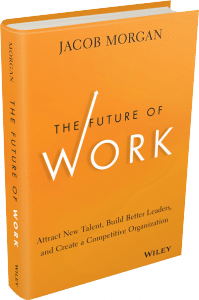 It’s not only about rethinking HR, management and work tools, that’s work that need to be reinvented. That’s the subject of The Future of Work: Attract New Talent, Build Better Leaders, and Create a Competitive Organization

Jacob starts reminding us what took us there, what forces us to reinvent work : new behaviors, mobility, technology, new generations and globalization. The same that are at work on the customer side, that said.

Then he assesses he reality of employees today, with two maine lines. The first is that, today, humans are asked to make jobs designed for machines and that there is an engagement crisis in the workplace.

Even if we already know all these things, stating them helps to set the scene. Now comes the most interesting part of the book, describing in a very detailed way what work will be tomorrow.

It starts not with the characteristics of tomorrow’s employee but with his context. I find the approach interesting. Talking about tomorrow’s employee often leads to reactions like “it won’t be possible in my company”, “these new generations are too demanding, who are they to ask for such things ?”. The context-based approach used by Jacob Morgan is interesting because it shows that it’s not about th whims of a spoiled generation and that tomorrow employee is a byproduct of the world he grew up in and that, to some extent, his characteristics are the result of facing phenomenons he would have preferred not to have faced.

The value of degrees is decreasing, flexibility is the only way to be employable in an unstable environment that does not reward loyalty, the world is globalized and the balance between work and life make the idea of work time and place obsolete.

Moreover – and that’s another chapter – work is not an employee-only matter. Jacob shows the raise of the freelancing economy, how it becomes the new normal and how the frontier between independent workers and employees is blurring. In tomorrow’s world, independent work is seen both as a way to decide how to manage one’s time and quality of life and a guard against more and more insecure jobs : the person that has many clients is less at risk when he loses one than the one that loses his only job and has to find another one. It’s a move towards freedom, even if it’s a choice for some and a burden for others, but it’s nothing more than the response to enterprises one can’t rely on for long-term employment.

The future of work as described by Jacob Morgan is about entrepreneurship and intrapreneurship and is flexible in all its dimensions. It’s the response to an economic and sociological context, not only an unilateral decision from the employee or the company.

What leads to a paradoxical discourse from the author since he shows us what the future of managers will be and what will be the future of enterprises…without managers. But if it looks paradoxical, it’s not. Managers won’t disappear as people but their role will evolve and this new role and skills it requires is what Jacob writes about. Consequence : enterprises will function without “old fashioned managers” what leads to a more distributed authority and accountability.

I’d like to elaborate more about this point. The examples used in the book are known by anyone interested in the matter, from Valve to WL Gore and always lead to the same reactions : it won’t work in our company, businesses need to be managed etc. The author is clear about that : these models may not work in any workplace and each business need to find its own way. I’ll had that, from my own standpoint, turning the pyramid and the chain of command upside down does not mean democracy inÂ  the workplace. The guiding line takes a new form and relies more of legitimacy and leadership than authority. Authority and accountability are more distributed and when all the members of a team are collectively accountable we can expect self-control mechanisms to be more powerful and relevant that when they are in the hand of a single person. One’s manager is not the only people concerned by what you do, all your colleagues are. By the way, distributed accountability and autonomy requires trust what requires smaller teams. Change won’t come without organisational redesign.

What is the subject of the next chapter. Saying that the enterprise of the future will be agile, responsible and rely on intrapreneurship is a very common place. In his book, Jacob Morgan gives details about what contributes to such a transformation : decentralized decision making, team size, intensive use of cloud, engagement through storytelling etc.

A clear and exhaustive picture of the future of work

What to say as a conclusion ? If you’ve been thinking about this matter for a reasonable time I don’t think you’ll learn anything new in terms of ideas and concepts. The issue has been around for more than a decade, stakes and solutions aren’t new, neither are the cases of mature organizations.

But Jacob Morgan did a good synthesis work, making things organized a clear for anyone, new to the domain or experienced. This book is a great entry door for those starting with this matter and are looking for a clear and exhaustive overview of the impacts of digital on work.

What I’m wondering about is how much time will it take to reach what Jabob Morgan describes ? Will the many barriers we already know and face be insurmountable ?

As a matter of fact what we portray today as the future of work and management is not far from what Peter Drucker started to work in the 60s, excepted what related to technology. What Jacob Morgan did is “Digitizing” Drucker in a relevant fashion but will it be enough to make organizations move forward ?