Who are the clichés about new generations for ?

New generations are extraterrestrials. They don’t respect anything, have expectations that are totally different from their elder’s and will revolutionize the way people consume and work.

That said, when you talk about that with field people, it often seem that the mountain has brought forth a mouse. Or, in other words, it’s not that bad and they calm down very quickly. I recently attended a panel on this matter and all panelists were agreeing : it takes less than six month for Yers, Millenials and, surely one day Gen Zs, to conform. I’m notÂ  saying that’s a good thing : losing what they bring in terms of change, innovation and expectations is a pity. And “looking” externally conform does not mean they’re not frustrated internally, what leads to disengagement.

New gens are not that terrible and acculturate quickly

As I already said, these generations are not that different from their elders. Of course there are differences but, as long as I can remember, it’s logical that any new generation comes with the peculiarities it developed when they grew up. Xers came with theirs, as did boomers, each generation having grown up in a world that was different from the previous generation’s.

On the other hand, the “young” are a very good pretext for the elder who claim for change but don’t really assume it. They young take blames they don’t always deserve.

However, when you talk with them – and that’s my point today – they admit they don’t recognize themselves in the way they’re described.

New Gens are an easy excuse for many things

So why do we keep on selling the idea the any new generation will be much more terrible that the previous one.

First, to sell change. It’s aÂ  flourishing and necessary business but, from time to time, it needs fuel to create a sense of urgency and push another new concept. Yers, millenials and Z perfectly played their part in this context.

Second, to justify an internal project. New Gens want this, this and this….so it helps to start HR, marketing or IT projects that despite of being meaningful need a compelling reason. Since these generations will soon account for more than half of the workforce, they’re a valid argument.

Thirds, as a member of these new gens recently told me, to convince them that they are different. I would not have paid that much attention to what he was saying if I hadn’t heard the same thing in the mouth of HR people or recruiters.

Let me sum it up in a few lines

The guys from your generation are saying so much BS about us. But that’s not us. Or not exactly. What’s your purpose ? Brainwashing us so we come for a job interview convinced that money does not matter and ready to work for peanuts ?

I don’t know if there’s a mandatory single way of thinking but one thing is sure : there’s a prevailing discourse about new generations and anything different gets very little attention and diffusion.

I already discussed an interesting IBM study on millenials but I’d like to elaborate a little bit more.

Boomers are the most concerned about environmental/social issues.

Millenials are the least passion driven.

Financial security is less important for millenials than for boomers but more than for Xers.

But the most noticeable point is that numbers are quite the same for each generation. 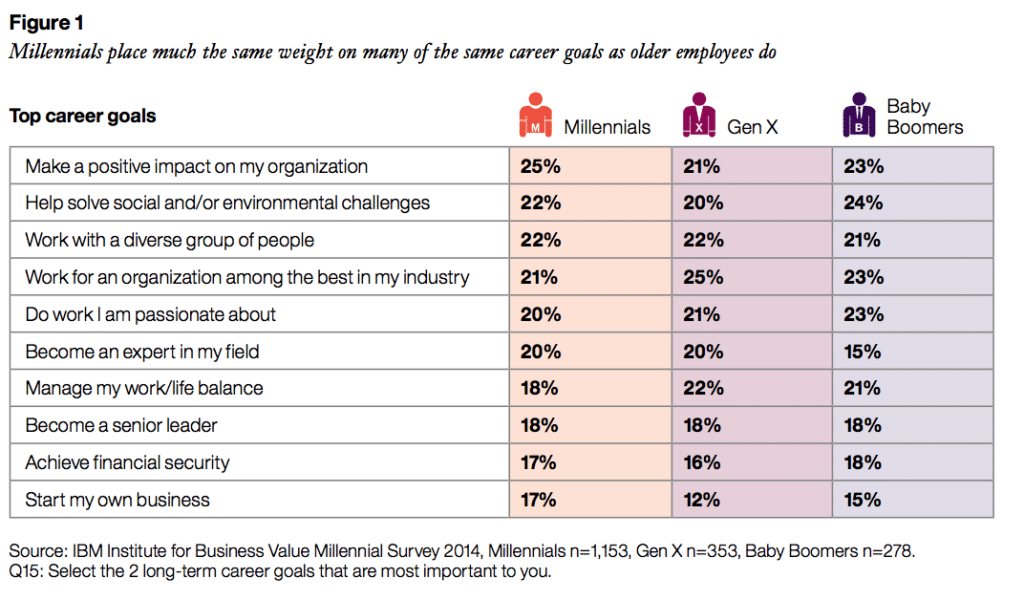 And when they leave a job it’s not to change the world. No more not less than others. What matters is their career. Reason first, passion second.

Now let’s talk about a study conducted by SAP and Oxford Economics. I had the chance to talk with one of the authors when it was published but had no time to write about it.

Changing the world does not matter for millenials. At least not more than for others. Work-life balance matters less than for others as well as finding a meaning in their work.

What matters to them ? First : money. Second : money.

Maybe they care about things the previous generations did not care about but that’s not “instead of” but “in addition to.”

So, to come back to the young student concerns, I have to agree with him. Many people have interests in convincing themselves and convincing them that they can accept anything provided they’re working at making the world better but that’s wrong. It even look like manipulation regarding to their own expectations because it would be a good thing for lots of people.

Maybe it’s high time to see them as they are and not as we would like them to be, stop living our own dreams through them and send businesses and recruiters on the wrong way.

In fact there’s so surprise if the young and the enterprise don’t seem to speak the same language.

Few things are as experience-driven as training in the employee's life cycle. Because it's something that we receive thus...
Read more
Employee Experience

Career management: the long-term experience of the employee

If we start from the principle that an experience is something that we live, it necessarily has an instantaneous character, even if...
Read more
Employee Experience

When does an employee’s onboarding begin and end?

The onboarding is a key moment for an employee. These are his first real moments in the company, the moment when, after...
Read more
Recommended Bookmarks

Remote work is one of the major issues of 2020, at least in countries like France where the lag on the subject...
Read more
Employee Experience

The 6 dimensions of a successful onboarding

Today nobody questions the fact that successful onboarding is essential. It determines whether an employee stays or leaves quickly, whether he or...
Read more
Human resources

For several years a growing number of companies have been using intrapreneurship as a tool for motivation and commitment.
Read more