Previous articleHRTechWorld 2016 : Reinventing HR or inventing something else ?
Next articleThe onboarding : the pivotal moment of employee experience
Lire

From Digital Transformation to busting bureaucracy

Digital transformation can mean different things. Some people will focus on customer experience but most of all it’s, for a business, acquiring the capabilities to operate at speed and scale on markets that move and transform fast. Customer and employee experience are means to this end.

“We must not expect and application to work in an environment in which its assumptions are not valid“. In other words, acquiring the last technologies to interact with the customer, improve the go-to-market, exchange, collaborate and make decisions fast will be useless if the structure of the company is designed for centralization, causes bottlenecks everywhere and, in the end, slows everything down.

This kind of structure has a name : bureaucracy. And it was the theme of Gary Hamel‘s keynote at HRTechWorld 2016. 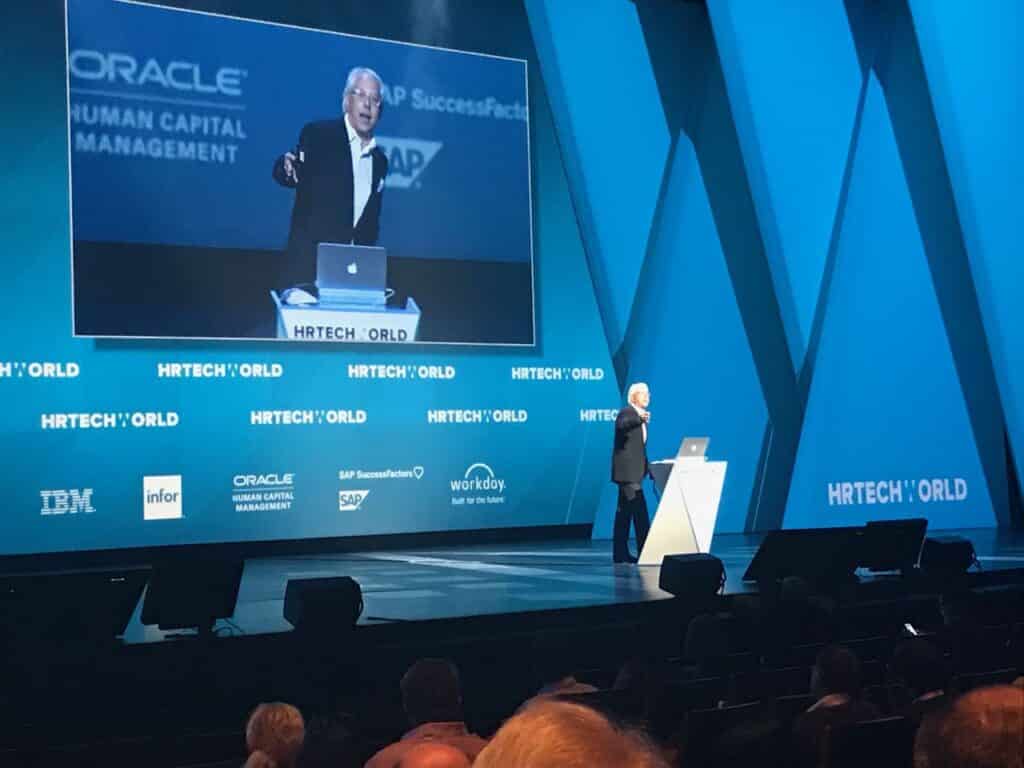 Startups are where talents flourish

According to Hamel, today, talents have a preference for startups. No because it’s fun or any similar reason but because it’s where they flourish and can give the best of themselves. It may be a matter of culture but it’s above all a matter of structure (even if the first has an impact on the second).

Startups are bold, open, flat, lean, simple and free. On the contrary , most of large businesses put their employees in a work environment that is exactly the opposite.

How many of you can agree with the following statements ? 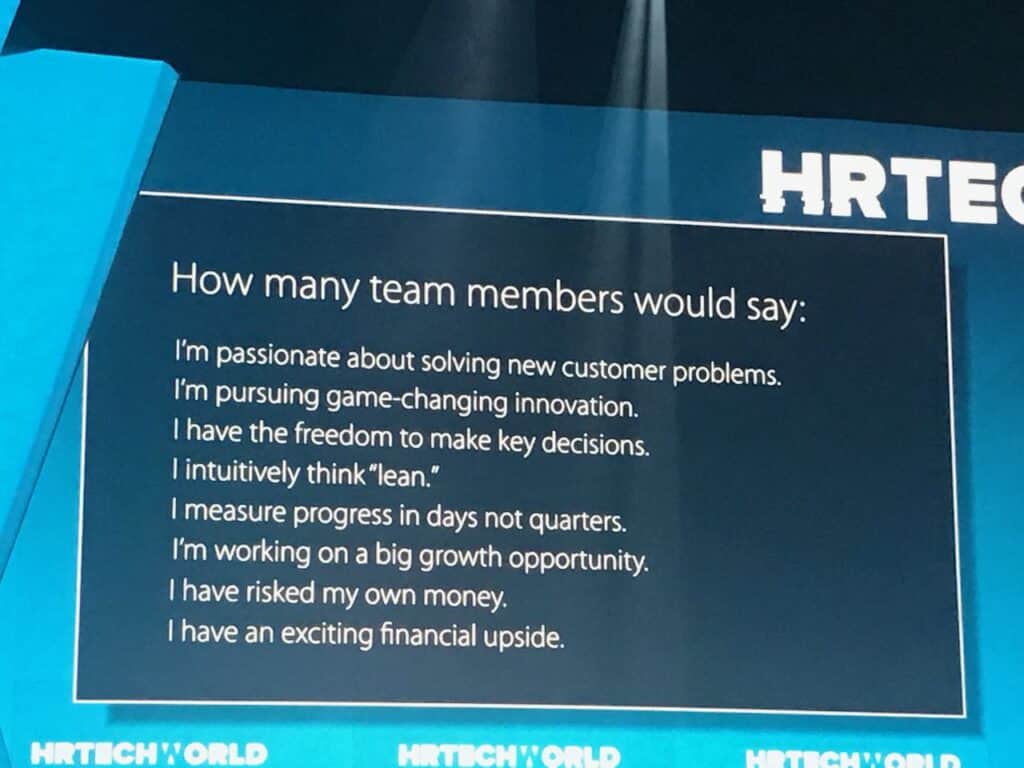 I’m more likely to think that for 95% of us, the following ones are more relevant. 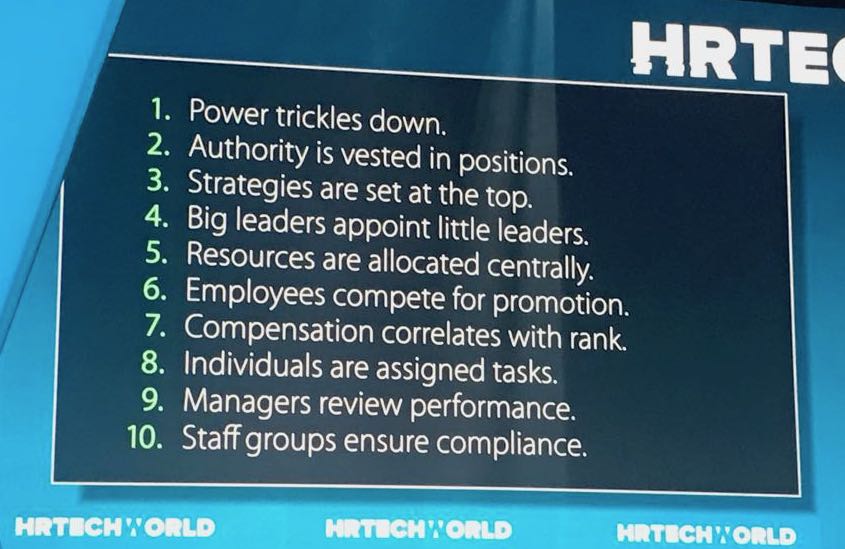 Before going further, I’d like to make two things clear.

â€¢ I’m not saying that “old” businesses are wrong and that startups get everything right. The truth is more complex : all large structures have been small at their beginning, agile, innovative. Over time they grew, had to structure, become manageable despite of their size, comply with what investors and markets expect in terms of governance. They became naturally fat even without being conscious and they’re the first to acknowledge that. And I guess that many startups we’re mentioning as examples today will follow the same path.

â€¢ As Hamel says, unicorns, that are a model for many, represent with their cumulated $400 billions valuation in the US only very small part of the overall capitalization (2%..).

Hence the logical conclusion : the point is not to create entrepreneurial enclaves but to spread this culture into existing organizations.

So bureaucracy is a disease that protects the organization against transformative cells and is a burden in day-to-day operations.

With, as we know, an impact on engagement. 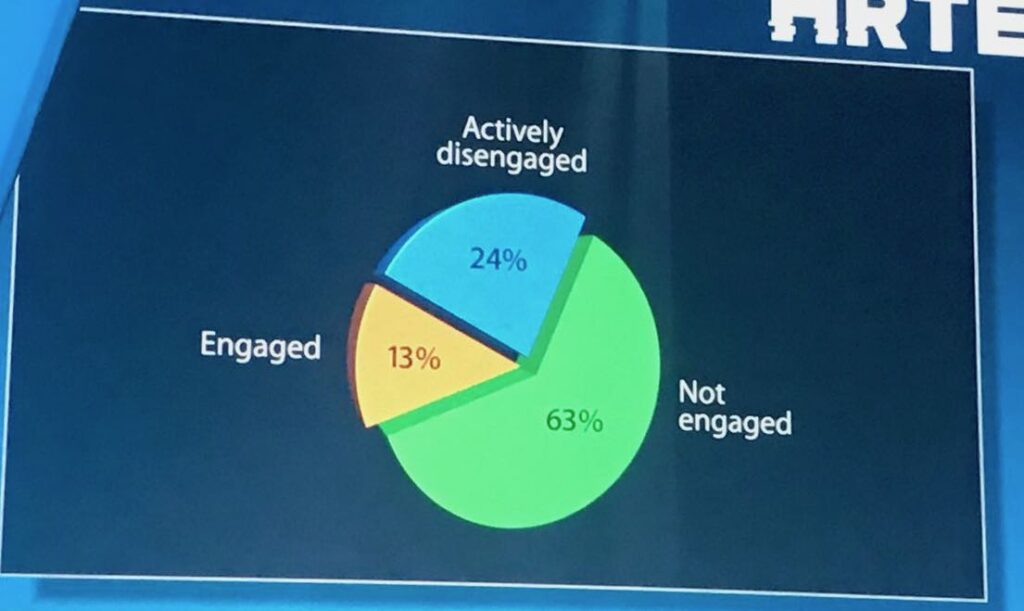 However, other models are possible and Hamel mentions a bunch of well-known examples.

â€¢ Hayer that operates 4 000 businesses with only three levels of hierarchy, relying on platforms, autonomy, venture-capitalism to co-fund initiatives and share the benefits with investors.

Nothing new here. Hamel is still in the trend of his latest book that he reuses year after yer with a different angle. He’s like famous chefs : he has his signature meals and serves them again and again but it’s always well served and dressed.

â€¢ A survey to measure the “Bureaucracy Mass Index” (BMI) of organizations.

Right now, he considers that bureaucracy would cost 3 trillions dollars to the US economy and 9 at the scale of the OECD.

Is it possible to digitize a bureaucratic organization

That’s all for the Hamel Show. Now, let’s try to go beyond marketed buzzwords and try to make the idea “land”. Inspiration is necessary but execution is what people expect.

As a matter of fact, the point is neither new nor difficult to sell : everyone has been aware of that for decades, starting with Peter Drucker 40 years ago.

Can enterprise digitization help ? I don’t think so anymore. Unbureaucratization is a prerequisite to digital transformation, not the consequence. There may be a chicken and egg effect but to transform in an acceptable amount of time something more radical is needed. My own definition of digital transformation is that it is a simplification process...what leads to Hamel’s conclusions.

Maybe another approach can be found with Yves Morieux who deals about the same issue with a different approach. According to him the best way to fight complicatedness is to collaborate. But whoever try to work on enterprise collaboration knows that it requires structural transformations beforehand, what is quite unpopular and painful.

Building out of the organization the startup that will kill its mother business ? I see more and more businesses following this way.

So everyone agrees that bureaucracy is a problem, that it’s hardÂ  to avoid as a business grows and that it’s even harder to bust once the company suffers from bureausclerosis.

There’s a consensus on the issue, not on the solution. Courage and employees buy-in are needed and that’s things no one can sell to large businesses. 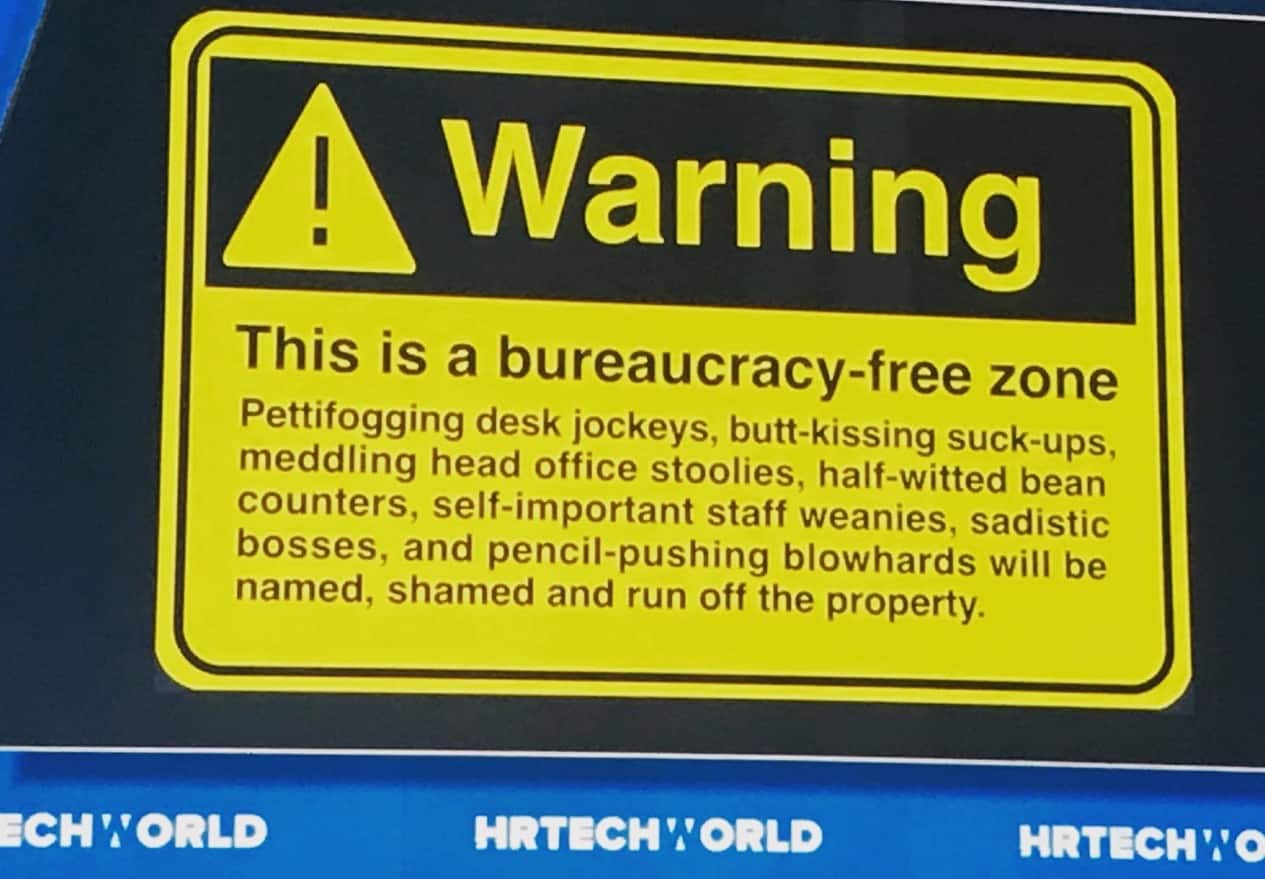 Do you need a digital strategy?

It was thought to have been buried for a long time, but it has resurfaced with COVID and its consequences, namely large-scale...
Read more
Employee Experience

Very often I hear that the purpose of the employee experience is to take care of…employees. Well if that's partly true it's...
Read more
Human resources

For several years a growing number of companies have been using intrapreneurship as a tool for motivation and commitment.
Read more
Management

Real “digital working” may not be far away. And not as cool as expected

Normally the employee's engagement can be anchored at different levels, at different points. In remote work, the relative importance of each of...
Read more
Collaboration

While it has been two months since companies have been immersed in forced remote work, they are beginning to learn the lessons....
Read more