There’s no customer experience without tangible signs of recognition

A couple of days ago I get a nice email from Uber, thanking me for my loyalty. There are lots of great services we use everyday without being able to measure our usage because they become transparent over time. I even told to myself “Oh…It did not thought I use them that much”.

I had two reactions.

The first was to say “At least they thank their customers”. Not everyone does it.

Then I reminded of my reaction regarding to one of their french competitors, Chauffeur PrivÃ©, that I use very rarely, by habit or, obviously, lack of. Chauffeur PrivÃ© has a loyalty program, on the same model as airlines. My first thoughts, an many people around me reacted in the same way, was to say “One need too many rides to benefit from a status, I’ll never make it”. That’s why I did not see the program as a market differentiator.

“Thank you” won’t win against a true loyalty program

So this email from Uber helped me realize that if I did as many rides with their competitor I would have got more recognition and benefits. Actually I would rank “platinum”. To some extent, the mail helped me to remind they had competitor. I’m not sure that’s what they intended. As a matter of fact, saying “thank you” is nice, but when recognition comes with nothing tangible, the customer may feel frustrated.

It must be what the guys at Chauffeur PrivÃ© did because the day after they sent to their customers a mail offering them to get the status on their loyalty program they would have got if they had used their service instead of Uber. 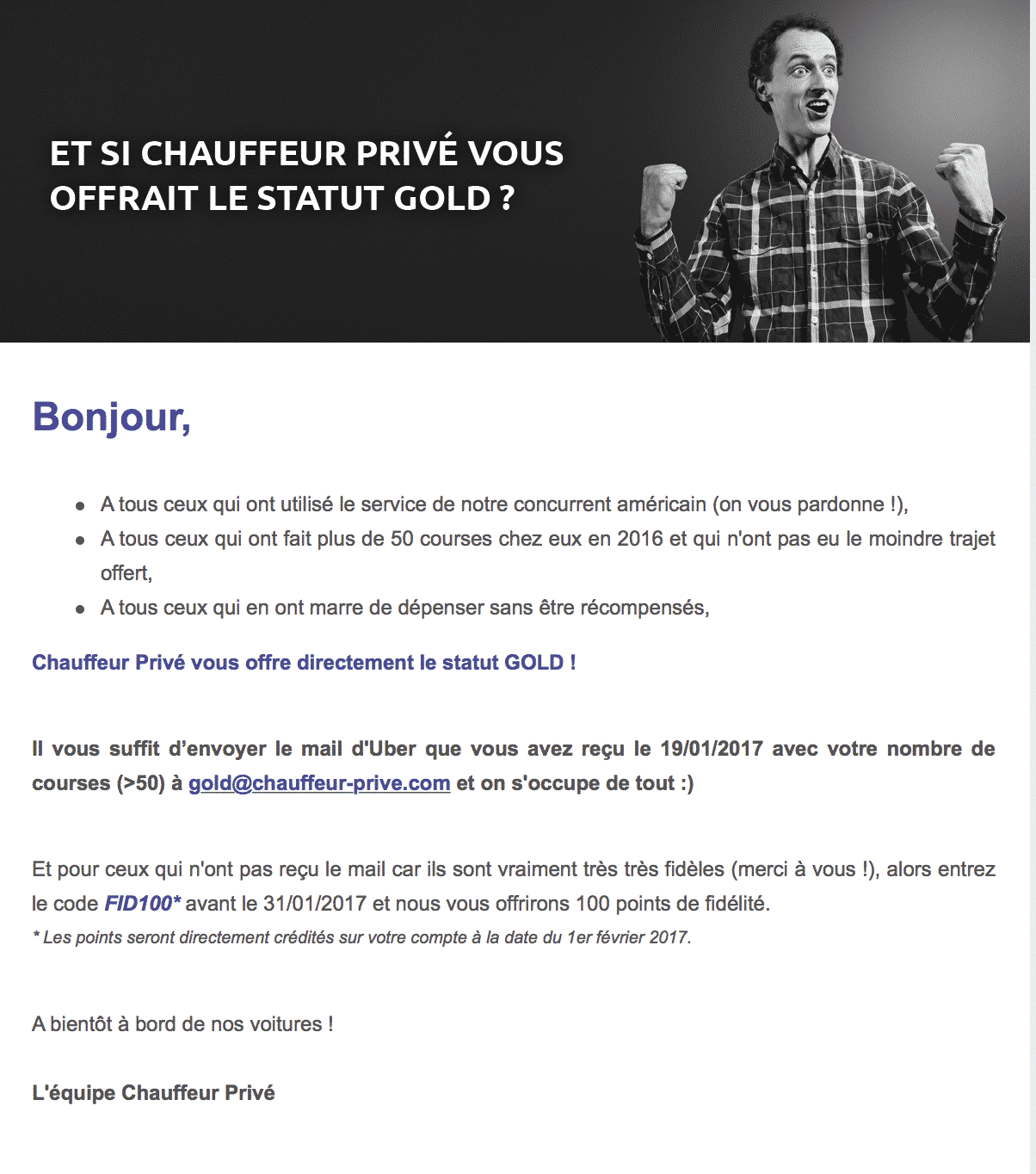 This is a very common tactic in the world of airlines : the status match. The idea is to target your competitor’s best customers by saying them : “We don’t have a shared history but it does not matter. We’re welcoming you in our loyalty program at the same level you have with ou competitor without having to wait without benefits until you get your status by using us”. It does not cost that much and it helps to “steal” customers that spend the most at competitors.

A friend try to reply to Uber’s email to make them notice they made a big fail. Of course their was nobody to read him…

“We’re not available at this address”….

Not a good experience though…

What happened. Uber played the “Thank You Economy” card but any backup. The message would have been good if Uber had a loyalty program and the “thank” you was the cherry on the cake. But it was not the case.

Uber made their customers realize they get nothing in return of their loyalty. And, at the same time, they gave a key, tangible, measured argument to their competitors to talk to their customers. Would Chauffeur PrivÃ© had advertised its loyalty program, the impact would have been limited because customers would have thought “I don’t use this kind of service so much”. Uber communicated the figures that allowed their competitor to strike back.

When you’re underperforming compared to your competitors on one matter (here loyalty), you should never talk about this matter in public, even if there’s a great opportunity to communicate.

Once again we get the evidence that communication won’t replace the product or the service and that the best message, the best intent, will eventually hit the wall of reality.

It will be interesting to know how many people will switch after that. Around me lots of people seem to be ready to move.

How can Uber make up for it ?

â€¢ by introducing a true loyalty program everyone has been expecting for years. But I don’t think that’s a part of the business plan. And, regarding to communication, the damage is done.

â€¢ by counter attacking and say that their competitor does not have as many drivers ? Most drivers work for both platforms.

In short, there are things to improve in terms of services, things to say or not in terms of communication but the damage is done and I consider this case is a textbook one, both for the fail of the one and the reaction of the other.

So let’s see how many customers will switch, and if the lever of quality and availability will help to retain them. Anyway, I think that tangible forms of recognition are now a real matter.

Moreover, knowing the difficult relationships between Uber and its drivers today, the latter may like to see customers moving to a platform with more acceptable business conditions will them, helping them to follow the same path and even to motivate customers to move.

The fan become a consumer

Of the the key learnings is that the customers of such services are becoming mature. Why Uber and not another company ? Because we’re proud of using the leader, not a copy-cat. It’s statutory. Because we wan forgive Uber for anything because they were the first and, consequently, we must fight for them and accept everything to not look backward-looking.

But times are changing. Customers are not fan anymore but consumers. And the consumer knows the rules of an industry : “If I don’t earn points and have noting tangible in return of my loyalty, I’m going to the competitor”.

Most leaders of the uber economy (or sharing economy or on demand economy if you prefer) will face a more and more mature marketing that won’t be driven by hype and love anymore.

Beyond that, there is something else. On some mature markets (like cities such as PAris), the “private driver reflex” is well rooted now. The first five years have been used to convert customers to a new product. What mattered was to build the market. Now that clients are there, industry player will have to work not on acquisition but on retention and loyalty – that’s been poorly addressed until now – will become essential.

Oh wait ? Why not having Marriott, IHG or Hilton trying a Status Match on AirBnb customers ?