For those who are not familiar with these environments, Slack and Teams are what we call “persistent group chats”. In other word they allow a team to have interactions that are as fluid as in a chat (vs an enterprise social network like Yammer) and the persistency made possible by a social network (vs instant messaging)

Here’s a demo of Teams.

And here’s Slack for the few people that have not been exposed to it so far.

Don’t be surprised if both look very similar. No one at Microsoft will say that Teams is not a copy of Slack. An improved copy, in my opinion, because conversations seem to be more structured and because I think I can’t be more difficult to find an old information than in Slack.

[Update] Since I wrote this post, Slack improved conversations by adding threaded discussions. That’s a proof that competition stimulates improvement. That said, it’s incredible to have waited until 2017 to get it and the users who felt disappointed by their first Slack experience won’t come back anyway.

Anyway, it does not really matter : I think that such tools are designed for instantaneity and, consequently, that a kind of messiness is a part of the concept (even if I expect Microsoft, because they are used to deal with huge volumes, to be better than Slack that did not had this experience).

Teams looks so much like Slack that Slack issued an open letter in the New York Times, which full content can be found here. 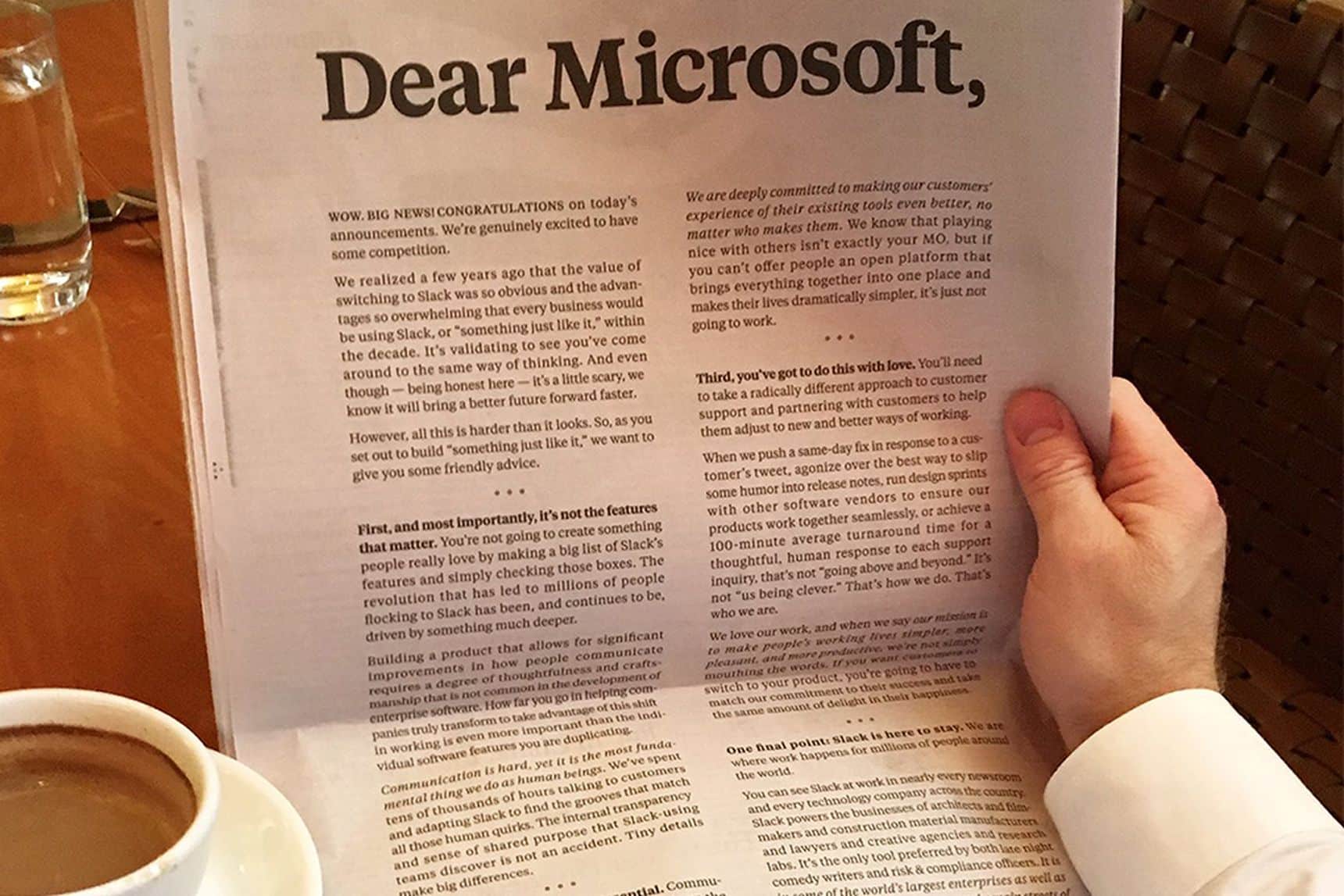 An ironic letter where Slack shares tips with Redmond’s giant to be successful on this market. The tone of voice is clear “it’s nice to copy us, but you’re not us, you don’t have the DNA, you’re not going to make it”.

Slack, the undisputed leader of a market it created

An offensive approach that shows that Slack does not fear Teams (and I am sure they are convinced they have no reason to fear).

An arrogant approach that is peculiar to many startups that have managed to dominate a market because the won the heart if users and are trendy. Today, if you’re not slacking you’re not cool, if you prefer Microsoft you’re old school.

At first sight, Microsoft missed the train and Slack is here to stay and grow.

Remember Netscape. In the end, Internet Explorer, that was terrible compared to Netscape, won.

Remember another open letter that made a lot of buzz. 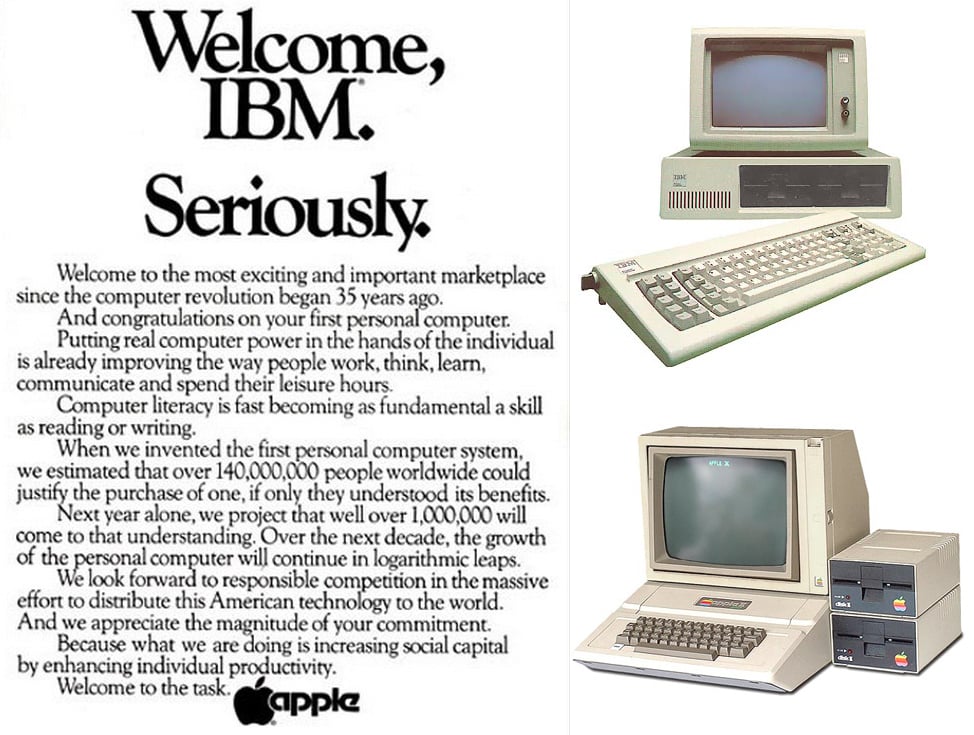 For the records, Apple did not manage to make in the enterprise what it made on the consumer market. By the way the real winner of the battle between Apple and IBM was…Microsoft.

Today Slack is hype. Tomorrow it will be commoditized and all the major players of the enterprise software world will have their Slack-Like.

Today Slack is a niche. To survive, a niche player must become profitable on its only market while general purpose one can occupy a niche while and make money on their mainstream products. Look what happened on the enterprise social networks market. In France, blueKiwi seems to be at the terminal stage. Jive, the exemplary pure player, is not doing as well as we could have hoped. The only ones able to still develop an offering in this market seem to be those that can pack it into more global deals. One must have a social network in its offering but no one make money with enterprise social networks alone. Vendors that “own” a large part of the enterprise portfolio and have lots of products bought by a given company can provide the social network with low margins or even for free. And in the end, Microsoft and IBM own much of the market.

One must be conscious that, beyond the hype, a solution like Slack (and probably Teams) won’t work for everyone. Most of times the IT and R&D like it, some projet teams too but it does not work for everybody. But Slack is expensive. Very expensive.

How is it possible to sell an expensive niche product while a competitor that is already well established is offering is similar product not for free but included in a suite everybody uses ? Slack is facing a challenge that, to my knowledge, no one met until now :Â depend on a single niche product that as a competitor available in a suite used already used by the client and actionable at zero marginal cost.

There’s still a possibility for Slack : if their product really outperforms Teams. Unfortunately, the open letter gives lots of arguments in favor of Microsoft. Each point could be used for Teams against Slack. I would even add that, by being to self-confident and rest on its laurels, Slack overlooked the user experience to such an extent that we can wonder if they did it in purpose, to introduce a split between those who have the Slack Mindset and those who don’t. A frequent example of arrogance from startups coming with a new model supposed to beat the established one while, when it comes to enterprise software, evolution is more a matter of coexistence than of destructive creation. (Once again, remind of the enterprise social networks.)

Let’s be clear : Microsoft’s weight in the enterprise world is so huge that even with a terrible product they could have killed Slack. And Teams seems to be as good and even more usable.

Month ago a rumor said that Microsoft was thinking of buying Slack for less than $10B. But the decision was made to develop an in-house competitor. Wise decision because Teams must have costed much less to come to the same result.

It reminds me of a discussion with Reid Hoffman, LinkedIn’s founder, in Paris, 10 years ago. When he was asked if he was willing to buy Viadeo to grow on the french market, he said “Let them die”. Implied : my product and strategy are better, no reason to waste money for nothing, they will eventually die. Ironically, LinkedIn was eventually acquired by Microsoft and I’m curious to know if Satya Nadella thought about Hoffman when he made this decision.

It’s not about the quality of the product or its ROI. There is no objective reason for a company using Office 365 to pay for Slack. Abrupt but unquestionable.

I know that going against the hype is not popular but I hardly see how Slack can make it in the future. Of course there will always be geeks, small businesses, young startups. But most of the market will belong to Microsoft. As usual.

Beyond the Slack case, that’s something any startup willing to take on the enterprise software market, most of all for internal uses, should think about. Creating and dominating a market deserves respect but does not mean the game is won. One day, legacy vendors, after having relied on you to evangelize the market, will come with a similar product, embedded in a global offer, available for zero marginal cost and will kill the market. At the stage there are only two options : be acquired or die.Â  That’s the reason why new players can become sustainable leaders on the consumer market while the enterprise market is still owned by IBM, Microsoft, Oracle or SAP. Who managed to establish in this market over the last 20 years ? Salesforce ? Who else ? QED. Unless they’re really much better, address a key process or become the center of an ecosystem, disruptors are rarely the winners.